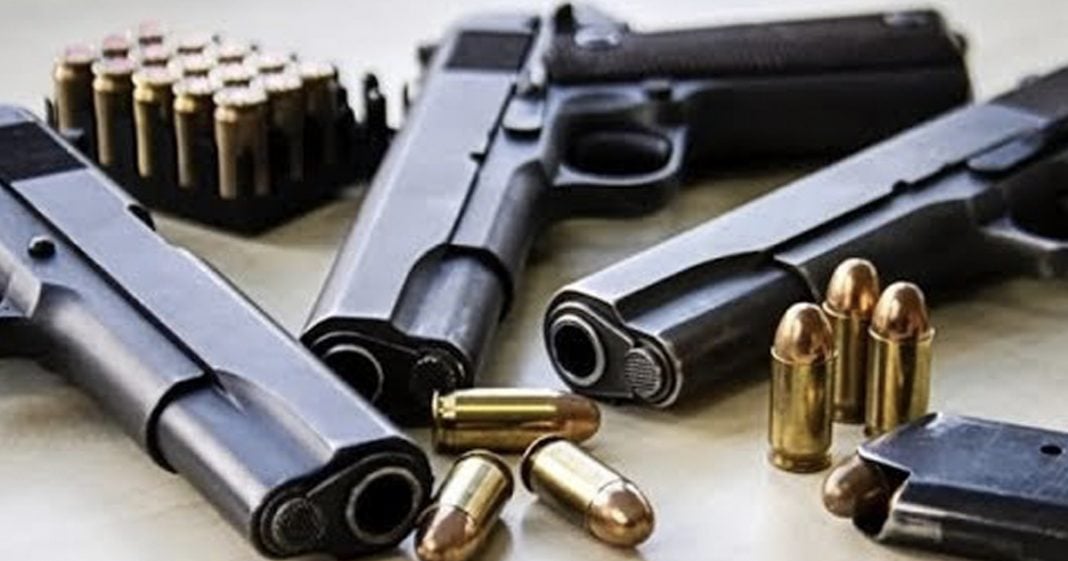 A new study published in the journal Pediatrics recently proved that states with stricter gun laws have a much lower rate of child murders. This new study confirms what other countries have been screaming at us for years – Put stricter laws in place and you’ll help reduce gun deaths. But the chances of the hardcore 2nd Amendment folks actually understanding the correlation is extremely low, as Ring of Fire’s Farron Cousins explains.

A new study published in the journal Pediatrics earlier this week, uh, told us something that all of us pretty much already knew was true. And that is that according to the available data here in the United States, states that have stricter gun laws also have fewer children dying by firearms. Simple as that, right? You have stricter gun laws, you have universal background checks, or you have had universal background checks for five years or longer. You’re seeing fewer kids being killed by guns in your state. That to me, based on all of the other evidence we also have is not just a correlation. It is finally causation.

Now here’s a couple of statistics here from this report. States that had universal background checks in place for at least five years, had a 35% lower risk for pediatric deaths. And right now, gun violence is the second leading cause of death for Americans under the age of 21. The second leading cause of death for people under the age of 21 is getting shot. Here in the United States, states with stricter gun laws had 4% fewer gun-related child deaths. So if they’ve recently put them in place or haven’t had them in place for five years or longer, it’s only about 4%. After you hit that five year mark, that number jumps up, uh, exponentially and you’re out 35% so that’s a pretty remarkable thing. Now, the reason I say this also proves causation is because when you look at other countries that have stricter gun laws or they’ve banned assault weapons and all kinds of automatic weapons, uh, they also have lower rates of gun death.

But this article specifically, I’m looking at the hill right here, they added this paragraph about one, two paragraphs here from the end of the story. It says the study did not show that implementing stricter gun laws would lead to fewer gun-related pediatric deaths, but rather that states with stricter gun laws had fewer pediatric deaths. So basically the author of this, uh, article here is trying to say that, hey, oh listen, study didn’t say if you put stricter gun laws in place, you’re going to reduce deaths only that when there’s stricter gun laws, there’s fewer deaths. They’re trying to say that there is only correlation. There is not causation because that is what we hear these Second Amendment folks tell us all the time. It’s just a correlation. It is not causation. It is though. We’re past that, folks. Let, let’s get over that stupid argument. Let’s move on. This is causation because it’s not just here in the United States where, Oh, this state has better background checks. This state has stricter gun laws. This state won’t let former felons get guns or you know, people with mental illness or people who are accused of beating the crap out of their spouse. You can’t own a gun. Oh my God. Suddenly all the gun deaths go down in the state. Just like everywhere else in the world where you have stricter gun laws, gun deaths go down. Then you come to the United States and we have some states that are like, hell no. You can walk into a gun, show with cash, buy a gun, walk out with a couple of rounds ready to go. You can carry four or five of them in your holster when you go to Costco, because sure, everybody knows Costco’s a dangerous place, right?

This is causation and let’s stop with the stupid arguments. Let’s look at the facts and figures in statistics and understand that if we want to stop children from being murdered in the United States, the only thing we can do about that is to have stricter gun control laws. That does not mean going around taking everybody’s guns. That does not mean banning all weapons here in the United States. All it means is let’s be a little bit smarter about it, right? But apparently being just a little bit smarter about the issue is enough to send some of the most hardcore gun rights activists over the edge.