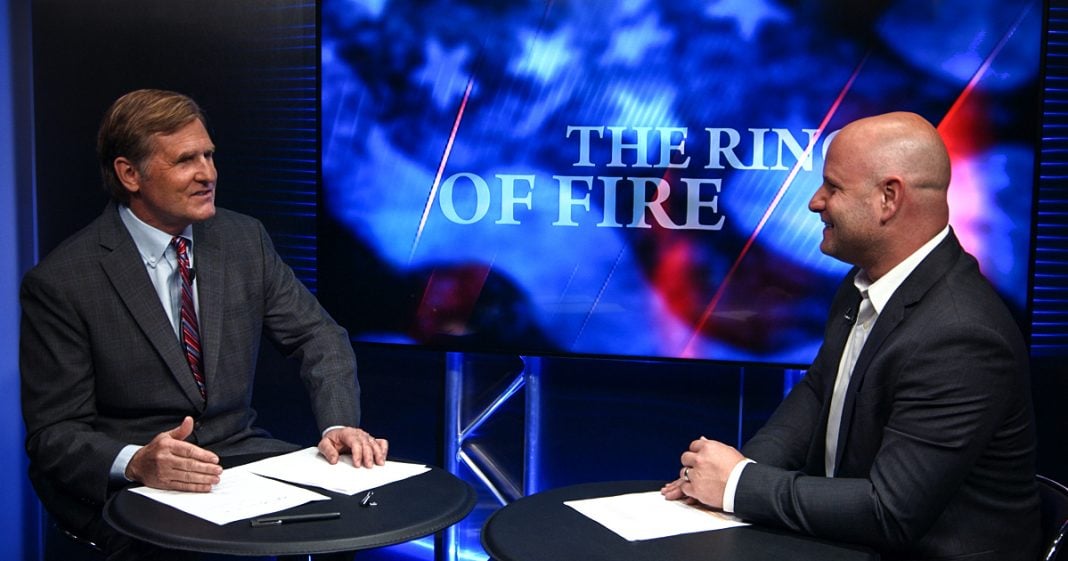 Both Republicans and Democrats teamed up to repeal vital protections of the Dodd-Frank Act. Ring of Fire’s Mike Papantonio and Farron Cousins discuss this.

Mike Papantonio:            Republicans and Democrats teamed up. Both, again, both parties. It wasn’t just the Republicans, it wasn’t just the Democrats, both of them, of these party. If you’re tribal about your politics, if you have this tribal notion, “Well, I’m Democrats and everything Democrats do,” “I’m Republican, everything … ,” you’re nuts. Okay, you’re nuts. Both Republicans and Democrats teamed up recently to repeal vital protections of the Dodd-Frank Act. Last week, President Trump, as you would expect, signed this disastrous law into effect. This is almost, again, it’s one of those stories we look at and you almost have to laugh.

Farron Cousins:            Right. Because the banks were able to convince them that, hey, I know you think a small bank is anybody with less than 50 billion, but really 250 billion is a small bank, and the protections that now are not in place for banks with less than 250 billion in capital, they were stress tests to make sure that this bank and everyone who was holding their money in it or had their mortgage with them could survive a financial crash.

And now they don’t have to go through that testing, so if you have your money in one of these banks that are 250 billion or less or you have your mortgage or your car loan, if that bank tanks, they have no idea whether or not they’re going to remain solvent, whether or not they’re going to be able to do whatever you need them to do, whether or not your money is still in that account because they were able to convince almost every Republican and 50 Democrats total, 33 in the House, 17 in the Senate, that, you know what? I only have 249 billion. I’m really tiny. I don’t have much money.

Farron Cousins:            I shouldn’t have to test to make sure I can survive the next disaster that we’re probably already working on.

Mike Papantonio:            No. No. No. There’s no question we’re working on the next disaster because the fundamentals are just lining up exactly like they were 2008. Walk back in time, 2008, the banks didn’t suffer at all. None of them went to prison, even though they were engaged in just out and out lying to investors, to mom and pop investors. They were lying to them. They were saying, “This is a good stock.” The bank that was saying, “This is a good stock,” was selling their stock. You see? At the same time, they’re loading mom and pop pinching programs, not just in the United States, all over the world, with this garbage.

Mike Papantonio:            Okay, so they come out of it. I remember, “We’re going to do something about this.” Remember that election? We’re going to do something about these bankers. Obama was up there and I was going, “Wow, I really love hearing a presidential candidate talk like that.” Well, none of them went to jail. Taxpayers ended up footing the bill for everything. Taxpayers that had nothing to do with this Wall Street thuggery scam. Had nothing to do with it. Taxpayers ended up footing the bill because the Democrats and the Republicans said, “Ah, these are our pals. We’re getting a lot of money from Goldman Sachs and all these other folks. Yeah, we know they committed crimes,” but they let them go anyway.

Farron Cousins:            Yeah, and at the same time, not just let them go, they let them go with billions of dollars in bailout money in their pockets as they’re heading back to their banks.

Farron Cousins:            You know, Goldman Sachs last week came out and said, “With the way things are heading right now, with what we see happening in this country, we’re predicting that a recession is right around the corner.” Are they going to stop doing what they do? Are they going to stop engaging in this kind of activity or lobbying for looser bank regulations? Absolutely not.

Farron Cousins:           They’re not going to do anything to try to help us from this recession that’s coming because they got make as much money and get out as soon as possible.

Mike Papantonio:            Isn’t that the same Goldman Sachs where one of the top of the food chain at Goldman Sachs says, “You know, we really better not cure cancer-“

Mike Papantonio:            “If we cure these long-term diseases, we’re going to lose a lot of money.” Goldman Sachs. That is the new norm of CEO thinking in America right now.