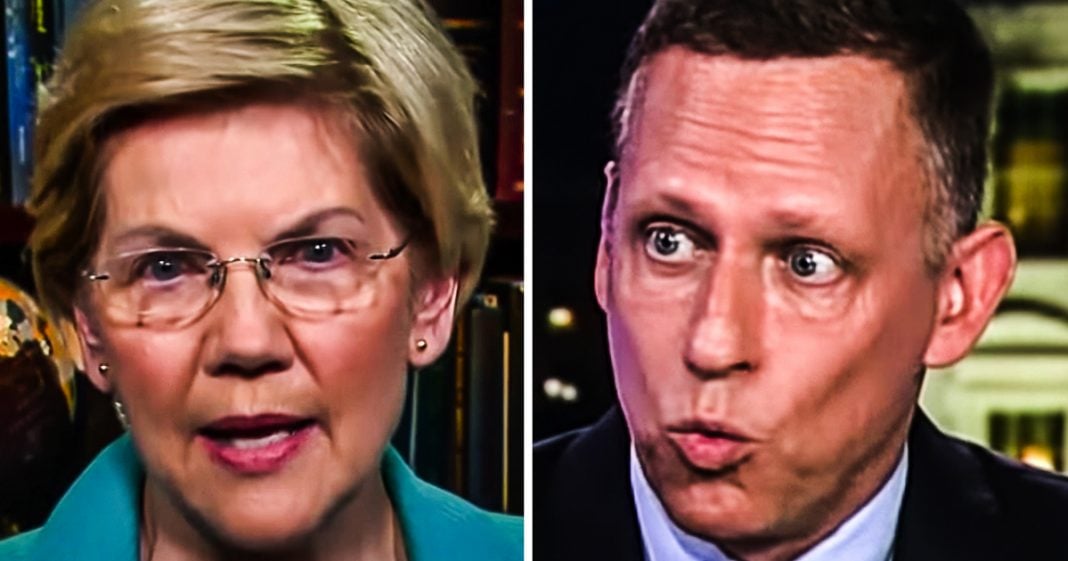 Billionaire Trump supporter Peter Thiel told Tucker Carlson on Fox News recently that Elizabeth Warren is the Democratic candidate who scares him the most, and Warren had one of the best and simplest statements about that: Good. That one word made waves on Twitter, and for good reason. Billionaires should be scared of Warren, and of course Bernie too, because these 1%ers have had it too good for too long while screwing over the rest of us. Ring of Fire’s Farron Cousins discusses this.

One of the saddest, and yet most fun aspects of modern politics is that politicians have to know how to use Twitter and they’ve got to be on there and they’ve got to say things and they got to say it clear, succinct, and you know, basically just directly get to the point here. Because if you can’t, you’re not going to be able to impress people. You’re not going to go viral. And again, unfortunately that is a big part of politics today. It sucks, but that’s what we have to deal with. But Elizabeth Warren actually had a phenomenal clap back earlier this week after Peter Thiel billionaire, a tech industry guy went on Tucker Carlson show on Fox News and he said that Elizabeth Warren is the person who scares him the most out of all the Democratic candidates. So Bloomberg tweeted out the following, he said,

Elizabeth Warren retweeted that with a comment and the comment was simply one word, one very powerful word,

Both of them have a couple of things and have said a couple of things that I do not agree with and it gives me a little bit of pause, but I would not ever rule out either one of those. I would not ever think for a moment that Elizabeth Warren is going to sell out the working class. I simply don’t believe it. There’s nothing in her history since going into politics that suggests she is going to turn her back on us. A lot of people out there saying, no, she’s a secret corporatist. She’s going to take PAC money, which she said she might. That is one of the things I don’t like. She is not a hundred percent clear on Medicare for All I know she said she was during the democratic debate. We had been waiting for a long time to hear it, but is that how it’s going to be?

Again, that’s one of the things I have reservations about. Bernie Sanders has been clear on those issues, but Bernie Sanders also voted to give the gun industry immunity. That’s, that’s not, that’s not okay and his rationale for it, his reasoning for it was very flimsy and I, I didn’t buy it. I don’t like it. I know that he has since talked about the gun violence epidemic here in the United States and he is very serious about it. But again, I don’t want to get into the few qualms I have with both of those candidates. The fact that they both scare the hell out of billionaires in this country. The fact that their terrifying the top 1% is one hell of an endorsement for both of them.