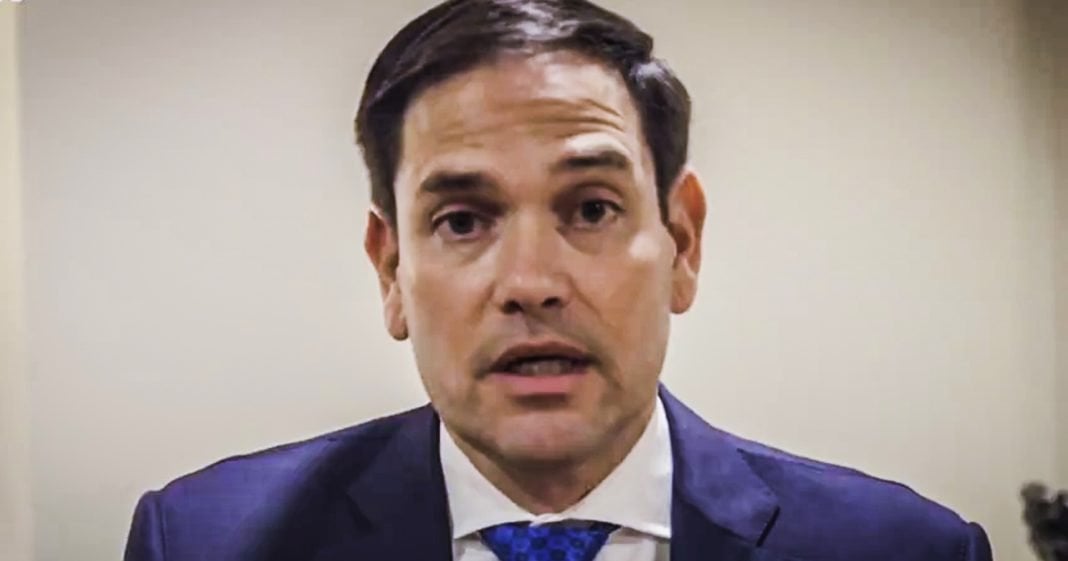 Farron Cousins:             Marco Rubio doesn’t like bullies. I, let’s be honest, nobody likes bullies, but unfortunately for Marco Rubio, he actually sees bullies in places where they do not exist. For example, yesterday Marco Rubio decided to release a video on Twitter talking about just how awful the dang Democrats are and how mean they have become over the last 30 or 40 years. But all that meanness has somehow reached a peak with representatives Rashida Tlaib, Ilhan Omar, Ayanna Pressley, and Alexandria Ocasio-Cortez. Those are the four people that Marco Rubio in this clip here says, have become political bullies. Take a look.

Marco Rubio:                “…And on top of it, you have these four members who are Americans. No one should question that they are fully as American as me or anybody else, but there are also political bullies that go around attacking people, calling other Democrats just like southern segregationists. But when you hit them back, it’s because they’re women of color.”

Farron Cousins:             So Rubio, actually, even before that part of the clip, he had started talking about the fact that, oh, they called Ronald Reagan a racist. They called George W. Bush or racist. They called John McCain a racist. Now they’re calling Trump a racist and they’re political bullies because that’s what they do. According to Rubio. And again, Rubio does know a thing or two about bullies because this is a guy who got pushed around throughout the entire 2015, 2016 Republican primary, uh, which really manifested itself so perfectly when Chris Christie absolutely destroyed this man on the Republican debate stage. Let’s take a look at that for anyone who forgot that this happened.

Marco Rubio:                “…And when I’m elected president, this will become once again the single greatest nation in the history of the world, not the disaster Barack Obama has imposed upon us.

Chris Christie:               “You see everybody, I want the people at home to think about this. That’s what Washington DC does. The drive-by shot at the beginning with incorrect and incomplete information and then the memorized 25 second speech that is exactly what his advisors gave him. See Marco, the thing is this, when you’re president the United States, when you’re a governor of a state, the memorized 30 second speech where you talk about how great America is at the end of it, doesn’t solve one problem for one person. They expect you to plow the snow. They expect you to get the schools open, and when the worst natural disaster in your state’s history hits you, they expect you to rebuild their state, which is what I’ve done. None of that stuff happens on the floor of the United States Senate. It’s a fine job. I’m glad you ran for it, but it does not prepare you for president of the United States.”

Marco Rubio:                “Chris, your state got hit by a massive snow storm two weeks ago. You didn’t even want to go back. They had to shame you into going back, and then you stayed there for 36 hours and then you left and came back to campaign. Those are the facts. Here’s the bottom line. This notion that Barack Obama doesn’t know what he’s doing is just not true.”

Farron Cousins:             So maybe that’s why Marco Rubio is trying to talk tough. Now say it, I’m standing up to bullies. He goes on in the clip to say it’s absurd. People are tired of this game. You have to immediately respond. Pick a side between these two. It’s a game I’m not going to play. It’s distracting us from the important things this country needs to be focused on and I’m not playing this game any more. Rubio, this is not a game. The man that you are defending, the party that you are a member of have shown us who they really are. That’s not a game. These four women that you attack has being political bullies. How exactly are the bullying people by pointing out reality, by going into congressional hearings, more prepared than people who’ve been in Congress for 30 years. You know, that’s the part of the story that people are continuously overlooking.

Yes, these women are grabbing headlines. Republicans are attacking them saying, oh, they hate America. They hate this. They hate that. But what they’re really pissed off about is not just these women’s popularity, but the fact that every video you watch of these women, when they are in some kind of hearing, when they’re in Congress on the floor of Congress, they’re better than most of the people in there. The career politicians, they’re awesome. They know what questions to ask. They are up in all the facts and statistics. They know everything. They are talking about some of the smartest members that Congress has seen in many, many years, and that’s what terrifies Republicans. And that’s what terrifies Little Marco Rubio, to borrow Trump’s nickname for him. Rubio is weak. Rubio is pathetic, and Rubio is scared. He’s scared of these powerful women, and the only reason he’s even standing up to them is because he has shown us repeatedly that he’s not even brave enough to stand up to any man who dares, criticize him or make fun of him. He thought he found an easy target with these women, but I can promise you Rubio, they’re going to fight back even more than a Trump or Chris Christie hybrid would fight back against you.