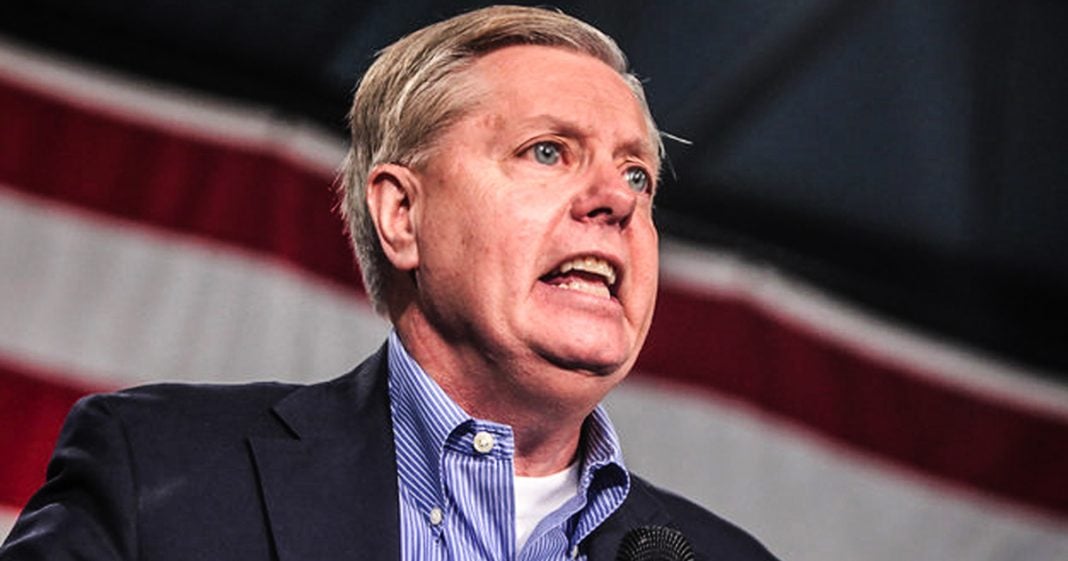 When being questioned by reporters this week, Republican Senator Lindsey Graham staunchly defended Donald Trump’s attacks on Rep. Ilhan Omar by saying that he only hates her because she criticizes him, not because of her ethnicity. Lindsey doesn’t realize that this admission is just as bad, and shows that the President will go out of his way to punish anyone who doesn’t fall in line with him, which explains what has happened to Lindsey Graham. Ring of Fire’s Farron Cousins discusses this.

Speaking to reporters on Capitol Hill yesterday, Lindsey Graham admitted a disturbing truth. Lindsey Graham inadvertently told us why he suddenly went from calling Trump a xenophobic racist to suddenly being the leader of the cult of Donald Trump. And this is what Mr. Graham had to say. And he was asked obviously about Donald Trump’s tweets and his attack on the four women in Congress. And this is what Graham said. He said,

“I’ve said before that if you’re a [Somalian] refugee wearing a [Make America Great] hat, he doesn’t want to send you back… He’d probably have dinner at the White House. What does that tell me, its about the criticism and the critic.”

Now what Lindsey Graham was attempting to tell us is that no, the president can’t be racist because if there was an African American who supported him, he would love that person. He hates Ilhan Omar and all the other women in Congress be because they criticize him. But if you’re nice to him, if you play ball, if you own a MAGA hat, you might actually get an invitation to have dinner at the White House according to Lindsey Graham. And that actually helps explain what has happened to Lindsey Graham.

Now I still maintain that Lindsey Graham has, for his entire career, he’s been a piece of crap. That’s what he is. That’s what he has always been. But there was a time when he did call out Donald Trump, he and his buddy John McCain would go out there and do these media interviews, tell us how dangerous he is, tell us how racist he is and how horrible he is. But then of course, they would both vote with him nearly at 90% of the time. But then suddenly something shifted in Lindsey Graham. And suddenly he was out there playing golf with the president. He was hanging out with the president.

He was flying on Air Force One with the president. And he just explained why Donald Trump hates when people criticize him. But he will reward you if you just say nice things about him and defend him. And that’s exactly what Lindsey Graham learned. And that’s exactly why he made that sharp one 80. This is what Lindsey Graham is doing now. He gave up the game yesterday while talking to Capitol Hill reporters. But I guess the biggest question that still remains is what’s in it for Lindsey Graham? I mean, you’ve run for president and a couple times and you’ve failed miserably every single time. I know you’re up for reelection, but that will likely, given your advanced age probably be the last term. You’re really able to serve. Majority of people in this country strongly dislike you. So that kind of rules out any future presidential ambitions, and you may not even win your Senate reelection because people really are starting to see what a disgusting and vile human being you truly are. So what are you getting out of this? Unfortunately, as of right now, that’s the question that we still can’t answer.