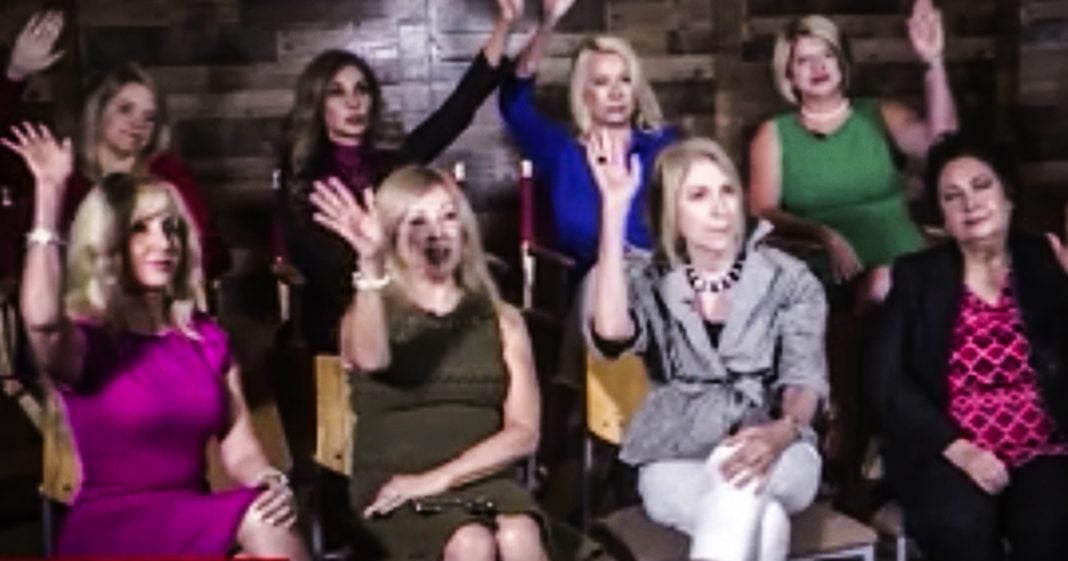 CNN loves to bring in groups of people to tell the world their feelings about the news of the day, and this practice has ramped up since Trump’s election. But it was revealed this week, following a panel of “Republican Women” who weren’t bothered by Trump’s tweets, that the network is using the same women over and over again, just labeling them differently to fit the narrative of the network. They are also pulling some of these women from hardcore Trump fan clubs. Ring of Fire’s Farron Cousins explains what’s happening.

You know, one of the things we’ve seen CNN start doing really a lot, I guess, since Donald Trump was sworn in an office, is that they like to go out into the country anywhere in the country, not necessarily the country, but they’ll grab, you know, seven, eight a dozen people, random people, maybe there’s, oh, these are all republicans, or all these are all democrats, but they like to just put them in a room, sit them in those chairs and just talk to them all, you know, get the average Americans feel for how things are going here in the United States. When they did it earlier this week after Donald Trump’s horrid in tweets about the four congress women that he told to go back to where you came from, and apparently these women had no problem with Trump’s comments. They didn’t see them as racist, they didn’t see them as wrong. They thought, yeah, that’s pretty spot on. Right?

But what CNN didn’t tell us about these women who they labeled as a just Trump’s supporters. Was it two of them? A woman by the name of Gian O’Briant and Peaches McGuire Coates were actually a members of a Trump-supporting organization. But CNN didn’t mention that. And okay, yeah, maybe they’ve, you know, they just want to Trump supporters. These women happen to be part of this big Trump supporting organization. So maybe just forgive him for that. Okay. Maybe we could do that. Well, what about the fact that CNN also didn’t mention that when they had these same two women on, uh, earlier this year or when they had them on, uh, last January? Do you see where I’m going with this? CNN is having these same women on, in addition to another woman named Dina Miller, who is also appeared repeatedly in these, a random average American republican panels.

CNN is essentially stacking the deck with these performers. Is, is really what you should call them at this point? They are performers. Yes, they are Trump supporters. Yes, they are Republicans. But CNN never mentions the fact that, oh, we went to these same women once again, this time we’re just going to label them Republican voters. This time, we’re going to label them Trump supporters. This time we’re going to label them average American citizens, but there’s nothing average about them. You’re taking the extreme of this side and repeatedly putting it on the air, trying to paint the picture that this is what they all believe. Now, if you’re following what I’m saying, this is an attempt to actually make Trump voters and Trump supporters look like they all believe these things. Huh? Didn’t see that coming did you? CNN is actually trying to make these Republicans look worse than some of them actually are.

By repeatedly having these crazy fringe women come on and just labeling them differently every time. I have no fan of Republicans. I do believe most of them are just like those women they have on the screen, but this is not fair. This is inaccurate. They’re not getting actual random samples. They’re not going out to middle America walking into a diner and saying, can I have all the Republicans come and sit in this room for a minute while I talk to you? That’s not what’s happening, but that’s how they’re portraying it. CNN is being dishonest. This is journalistic malpractice that borderlines on complete unethical because they’re not telling us who these people are or the fact that they gay, they keep going to the same crazy women so that they can make everyone look crazy. You don’t need to try to make Trump supporters look bad scene, and they do a great job of that on their own. But there’s also plenty of decent people in this country that you could easily go out and talk to. But at this point, I think it’s very clear that you do have an agenda and that agenda got completely busted this week.