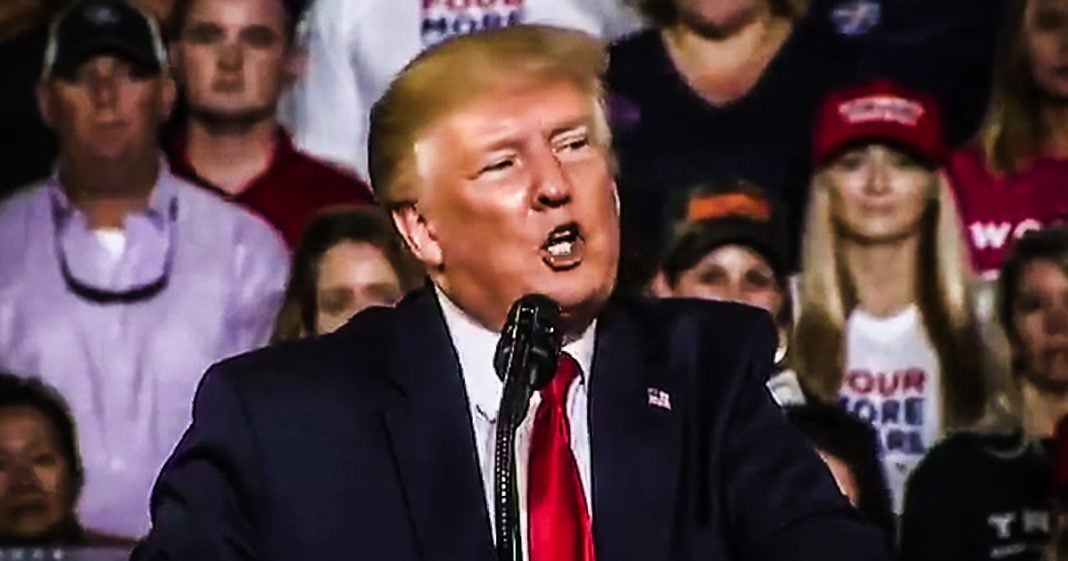 Donald Trump knows exactly what he’s doing, but he doesn’t realize that it isn’t a winning strategy. And yes, he got the disgusting, pathetic excuses for human beings who attend his rallies to chant “send her back” as he began attacking Ilhan Omar, but all that did was help to further expose the bigotry that has become the bedrock of the Republican Party. Ring of Fire’s Farron Cousins discusses this and explains why we should all Stand With Ilhan.

Donald Trump:              “For the crisis in Venezuela. I mean, think of that one. And she looks down with contempt on the hardworking American saying that ignorance is pervasive in many parts of this country.”

Donald Trump:              “…And obviously, and importantly, Omar has a history of launching vicious anti-Semitic screeds.”

Farron Cousins:             So that was footage from Donald Trump’s rally in North Carolina last night. Obviously the crowd there is super excited about the thought of sending people back to their countries, even if that person happens to be an American citizen and an elected member of Congress. What we saw at that rally, what we just heard in that clip is absolutely terrifying. You know, a lot of times people when they look back at history and they say, oh, how did people go to these rallies in Germany and allow this a Adolf guy to rise to power? How could they let that happen? We saw it last night. That’s what that was. That’s how this thing starts. And in fact, that’s not even the start of it. That’s just the latest escalation of it.

First it started with Donald Trump telling us that people were coming into this country to rape and kill us to actually what he said, I believe that was his campaign kickoff in 2015 everybody coming over here is going to rape or kill you, and if you survive, then they’re going to take your job. So your life’s going to suck anyway, and now it’s escalated after we started locking them in cages to go back to your country. We don’t want you here. Oh, you’re an American citizen. You’ve been in this country longer than my, my wife that I imported. Oh, whoa, go back. Oh, you’re, you’re a member of Congress. Don’t care. Go back to your country. You America-hating foreigner. That’s the message that the Trump campaign, that the Trump administration and that every single Donald Trump supporter at that rally is getting behind right now.

This is terrifying and it’s going to get worse. And we know what’s going to get worse because this is the administration’s new strategy. They think they found a winner here and they are going to ride it until they cannot write it anymore. And part of the reason we know that is because Maggie Haberman, you know, White House correspondent, New York Times told CNN last night, that this was not an extemporaneous speech by Donald Trump. Those attacks on Ilhan Omar, we’re on the teleprompter. Now the “Send her back” part was not; that little disgusting vile chant, that wasn’t on the teleprompter, but all the other lies that he spread about her, those were, these are his official talking points now and anyone who supports Donald Trump supports this.

The National Republican Party, the GOP itself as an organization embraces this. If they do not come out and condemn it, then they are a part of it. Ronna McDaniels chairwoman and the GOP, she supports this Mitch McConnell. He supports this a house minority leader, Kevin McCarthy. He supports this. Every one of those rallies, they support this. Anyone who is not speaking out against this, you’re endorsing it and yes, that’s where we’re at and no, there is no gray area in the middle. This is what it is. Either you denounce it and call it what it is, which is overt and blatant racism, or you’re embracing it. Those are your only two options. Choose wisely. The future of the country may depend on it.