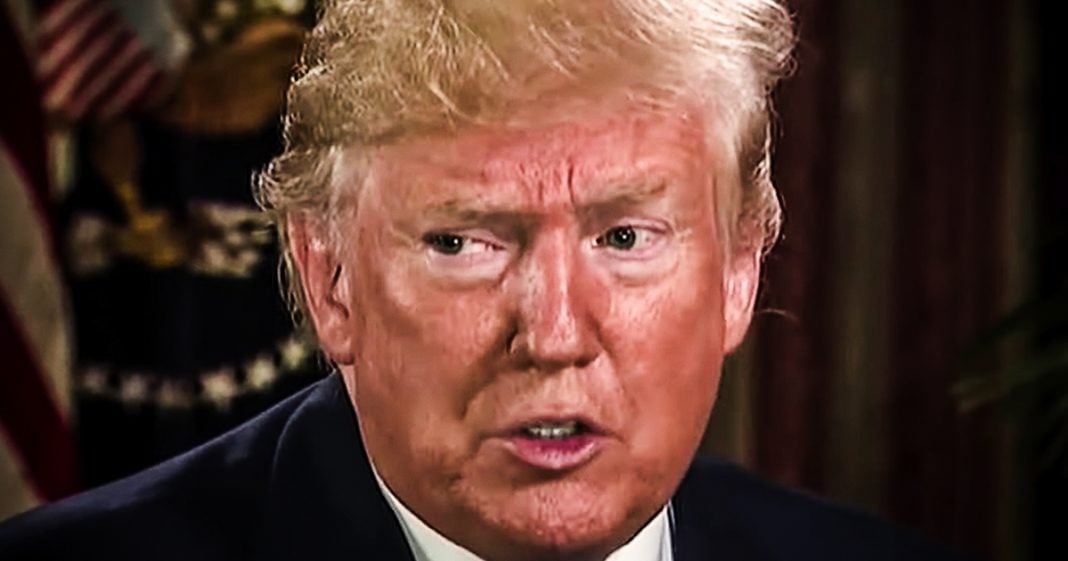 Donald Trump thinks that he has hit on a winning campaign theme by telling people to “go back to your country.” But what he’s really stumbled upon is a great way to LOSE court battles and have his policies reversed by the courts. The man is too stupid to be successful, and that’s actually a good thing for the United States. Ring of Fire’s Farron Cousins discusses this.

Donald Trump believes he has found a winning strategy for the 2020 presidential campaign. And that is to go after any non-white person claimed that they do not love America and tell them that they need to get the hell out of our country. All right. We saw on Wednesday night’s rally the people chanting, “Send her back” at Ilhan Omar after Donald Trump started attacking her, and that is the message that Donald Trump is going to stick with. He stuck with it all week on Twitter, tweeting it every single day since it originally blew up on Sunday. And that’s their new message. That is their new campaign strategy and that is going to cost them big time. Now, we already know Donald Trump cannot win a presidential election with just his base alone. And those are the only people who seem to like what he’s saying right now. So this isn’t even about that.

The numbers for him simply don’t add up. If you want to keep hammering this, go for it because it’s a losing strategy, but actually don’t go for it because it’s really hurting the United States and putting Ilhan Omar and all the other, uh, AOC and Pressley and Tlaib, It’s putting them all in danger. So I do not want you to continue, but another reason why you shouldn’t want to continue Mr. Trump is that all of these racist statements that you’re making about immigrants, uh, go back to your country. You know, America love it or get the hell out. Um, that’s going to cost you big time in court. And if you had any brain in that big quaffed head of yours, you would know that because it’s already happened to you at least six different times in the last two and a half years. See, people seem to forget the Donald Trump, his administration, they have lost numerous court battles, six, at least, because of Donald Trump’s tweets and statements that he made at his rallies.

Now most of these court cases involve things like immigration. You know, Donald Trump goes out there to launch his campaign. It says immigrants coming over here to kill you to coming over here to rape you. And then after they’ve done both of those things, I don’t know which order they’re going to take your job, but he, his last court cases about trying to end DACA, he is lost court cases on trying to prosecute asylum seekers because of those very words and lawyers who are having to challenge the Trump administration’s policies are getting much smarter about it and they’re using his words against him in court. Not by just trying to argue that the policy’s bad, but they’re making equal protection clause cases rather than regular, you know, challenges. They’re challenging these as violations of the equal protection clauses of the constitution and they’re using Trump’s own words against him.

They’re trying to say this policy he came up with has nothing to do with the country being too full has nothing to do with, you know, stopping the bad people from getting into this country. Look at the Twitter statement here. It’s because he want non-white people coming into the country. They have done that and they have been successful when they’ve done that. And Trump loses every time they do it. Yeah. The Muslim ban is a great example. Up until Donald Trump path a, the supreme court that got shot down by every single court because of statements Donald Trump had made that were, were shown to be a huge animosity against Muslims. And that’s what’s going to happen with these statements. The more he says it, the more he’s going to lose, not just with the American electorate, but in terms of policy, in terms of court cases. This is a losing strategy for the president of the United States, but he doesn’t have any ones surrounding him with the brains and courage to let them know that.