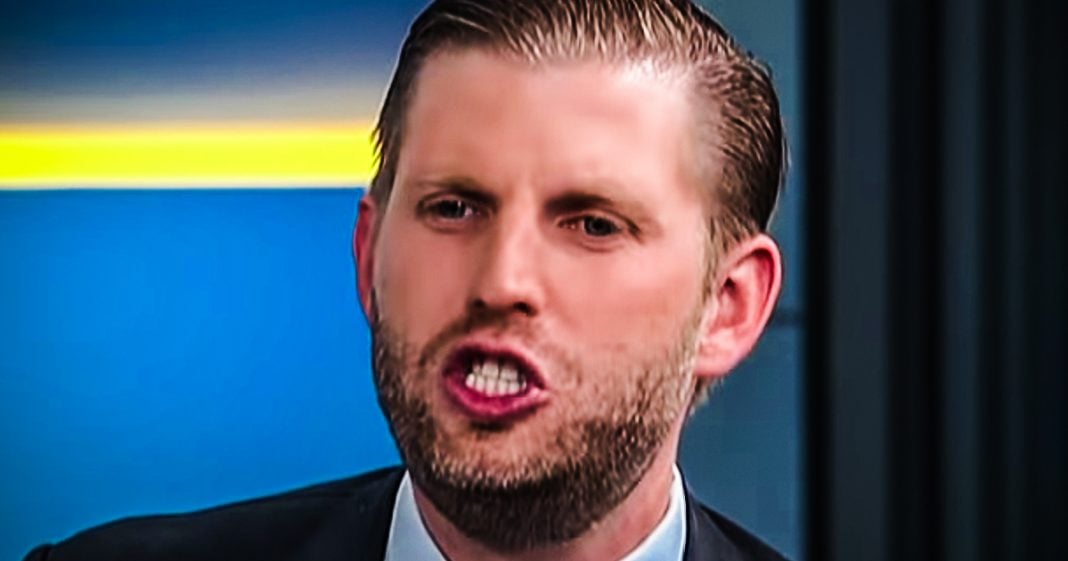 Eric Trump has never been viewed as any kind of intellectual, and his appearance on Fox & Friends on Wednesday morning helped show us why. Without providing any sources, Eric claimed that 95% of people in this country support his father, even though the President has never even hit a 50% approval rating in polling aggregates. This man is trying to be a conman like his father, he’s just far too stupid to pull it off, as Ring of Fire’s Farron Cousins explains.

You know, ever since Donald Trump came into office, his two eldest sons, Donald Trump Jr. and Eric Trump, have basically been in this war, this unspoken war about who can be the dumbest offspring of Donald Trump. And most of the time it’s Eric. I mean, Eric just kills it on being the dumbest person in the Trump family tree. But every now and then Don Jr. comes out and he’ll say something stupid or he’ll do something stupid or whatever. But Eric, once again this week decided he wanted to reclaim that throne as the absolute dumbest Trump child out there. And he did it on Wednesday morning on an a during an appearance on Fox and friends. When he said the following, he said,

Now, I’ve never once thought to myself, Eric, Trump is probably good with numbers or Eric Trump is probably good at reading, and this statement kind of confirms that I’m right. He’s, he’s not good at either because there is not a single pole out there. There is not a single issue out there where 95% of the people in this country back up Donald Trump, if he’s talking about overall approval ratings, well guess what? The aggregates still have him at 44.8% 44.8% the man has never even hit 50% with the polling aggregates since he was sworn into office. He has never had the support of half the country ever let alone 95% okay, so maybe Eric was talking about 95% of Republicans. Maybe he misspoke. I mean after all, he’s not very smart. It happens. But even that buddy, right now, he’s sitting at 72% approval according to the latest Reuters poll among Republicans, and that’s actually up five points from what it was about a week or two ago.

Only 72% of Republicans support your dad. He doesn’t even have three quarters of the Republicans on his side. And maybe since Eric Trump did say in this message, 95% support him in this message. Maybe he’s talking about the America love it or leave it statement, right? I mean who wouldn’t agree with that other than of course 68% of the American public who thinks it’s a horrible statement and yet that yes, there are horrible racist overtones there. So even on that issue, Eric Trump is wrong. So no matter which way you slice it, no matter what kind of context you want to apply to Eric Trump’s 95% number, it’s wrong. So either Eric Trump is like his father and sometimes he just makes up numbers or he is so painfully stupid that he doesn’t understand how to read polling data because the numbers are readily available. Eric. And that’s what makes this particular lie even newsworthy is the fact that we can fact check it.

We can look it up. I spent most of my morning going through every possible poll imaginable to see if there was any way 95% of the people supported him on anything. And guess what? There isn’t. You’re a liar and you’re an idiot. I just can’t figure out right now which one you are more of. But I’m always, in your case, going to lead more towards idiot than liar because I believe some of it is a little bit malicious, but for the most part, you’re just a big old dunce walking around there trying to gain daddy’s love, and I hate to tell you bud, but the only thing your father actually loves is money.