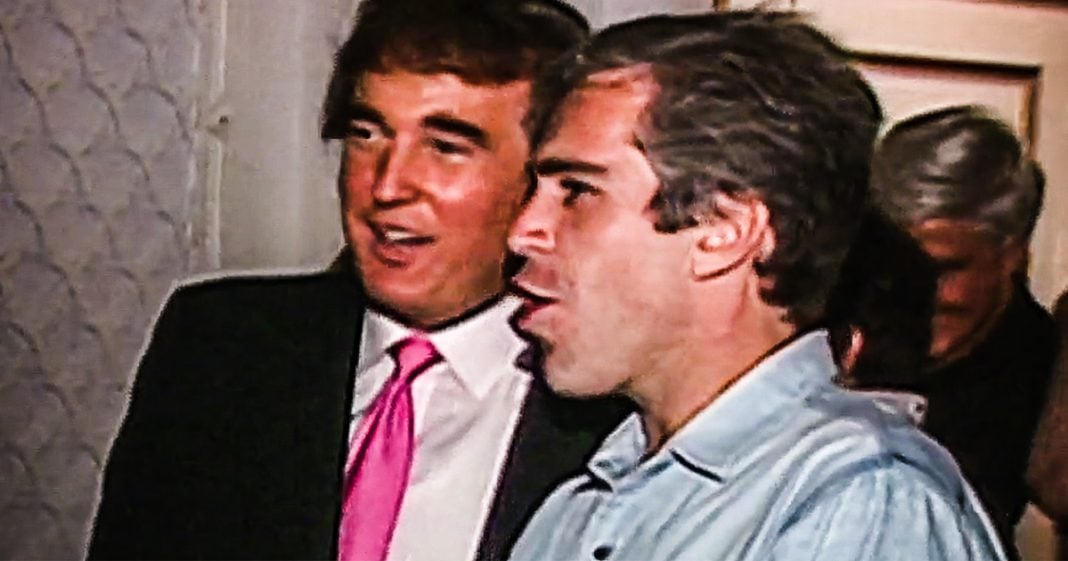 NBC has released footage from their archives from 1992, where they were preparing a story on Donald Trump and his parties at Mar-A-Lago. But one of the party guests caught on film being extra chummy with the President is none other than Jeffrey Epstein. The two are seen talking multiple different times, and at least part of their conversations were about how hot certain women were in the room. Ring of Fire’s Farron Cousins discusses this.

Farron Cousins:             Donald Trump has told us in the last few days that he was never a big fan of Jeff Epstein and that you know I really only knew him in the context of we lived in the same area for part of the year. But NBC News managed to find footage in their archives from November 1992 for a what was the show Faith Daniels’ talk show A Closer Look. They wanted to get a closer look at Donald Trump and his playboy lifestyle following his divorce and one should know it at this party. Donald Trump was throwing it Mar-a-Lago with the Buffalo Bills cheerleaders.

Narration:                     “But in the 90s Mar-a-Lago was Trump’s South Florida party palace one frequented by Jeffrey Epstein who is facing charges for sex trafficking. He has pleaded not guilty. The president says his relationship with Epstein was no different than anyone else in their elite circle.”

Narration:                     “Yet a tape in the NBC archives of a Mar-a-Lago party shows Trump. Giving Epstein his personal attention… The footage shot in November of 1992, before Trump opens the resort as a club, shows the future president surrounded by cheerleaders for the Buffalo Bills and Miami Dolphins capturing Trump’s fun loving bachelor lifestyle for an appearance on Faith Daniels’ NBC talk show.”

Narration:               “Trump is surrounded by women. As music blares in the background. After a while Trump goes to greet. Three new guests. Among them, the financier Jeffrey Epstein. More than a decade before his guilty plea on state prostitution charges. Later in the footage Trump is seen talking to Epstein and another man. As women are dancing in front of them. Trump alternates between dancing and pointing out women to Epstein and the other man and telling Epstein about the cameras know exactly what they say is difficult to understand as they discuss the women and their appearances. Trump gestures to one and appears to say to Epstein. ‘Look at her back there. She’s hot.’ And then Trump says something else into Epstein’s ear. That makes him double over with laughter. But as the president says now. He never liked Epstein.”

Farron Cousins:             All right so let’s get it out of the way here with the elephant the room obviously Donald Trump and Jeffrey Epstein we’re very friendly with one another. And at some point as they pointed out in the video Donald Trump says something so hilarious in Epstein’s ear that he just laughed because of objectifying women is so much fun isn’t it. Because that also happened right after Donald Trump was pointedly who look at who she’s super cute. So here’s the thing. Maybe this helps explain why Donald Trump has been in such a pissy mood for the last few days. You know, why he keeps doubling down on his horrific comments that are actually gaining him with Republicans but losing him with the majority of the electorate. So it’s a losing strategy but it’s a phenomenal distraction because Donald Trump doesn’t want us to know just how close he was with this billionaire who is now being accused of human trafficking. And that’s what he’s doing very well.

Bill Clinton who is obviously very connected to Jeff Epstein really only made the one statement he came out and said Oh I only run his jet four times not twenty six times OK. Goodbye I’m not going to say anything else goodbye. That was the smart move. It doesn’t save you and we sure as hell don’t believe you Bill. But that was the smart thing. But Trump thinks he can keep distracting the public so that we don’t pay attention to his connection to this disgusting human being, Jeff Epstein. But let me let me put it this way for a moment. Take that video clip and remove all of the shots of Epstein from it. And what do you have? You have a video that still even just 10 years ago would have been the end of anyone’s political career. Donald Trump is seen caressing these young professional cheerleaders. And if that’s not bad enough his dance moves alone should be disqualify for office.

That’s creepy as hell. And that’s an image I’m not going to be able to get out of my head ever but the bottom line the real serious truth here is that Donald Trump cannot separate himself from Jeff Epstein. The two party together. They liked each other. They were good friends and as Donald Trump once said Epstein loves women almost as much as I do and he tends to like them on the younger side. These two were thick as thieves. And I have a feeling we’re going to find out even more about their connection as this trial moves forward.