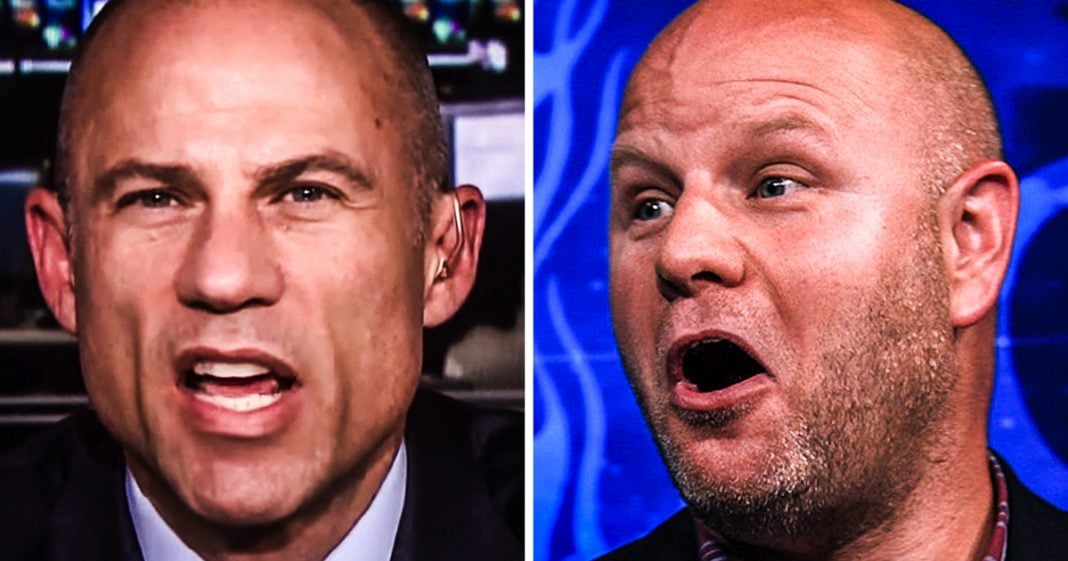 Michael Avenatti is not a fan of criticism, much like Donald Trump, and Ring of Fire’s Farron Cousins found that out after some light trolling of the lawyer. Farron brought up the charges against Avenatti after he seemingly took a swipe at Rep. Alexandria Ocasio-Cortez, and when Avenatti saw the tweet a week later, he sent a hilariously deranged message to Farron. Watch Farron talk about the message and remind everyone of the charges facing Michael Avenatti.

That’s what he tweeted out July 7th. It was a Sunday. So I quote tweeted it, retweeted with comment, whatever you call it. And I said, quote,

“yes she can. The question you should be worried about is can you win your trial for being a corrupt fraud who stole from his clients?”

Simple question, right? You know a little bit a light trolling here and there on Twitter never hurt anybody except apparently it hurt Michael Avenatti’s feelings when he finally noticed it this past Sunday.

Now here’s the thing I’m trying to figure out. Actually right off the top of my head. Did it, did he not notice it until a week later or was he so pissed off about it that it took them a full week to send me in a direct message? This response and here’s the screenshot of it.

“You are truly a piece of shit. A disgrace. How can you call yourself a lawyer when you don’t even believe in the presumption of innocence? Get the fuck off my feed. You are a nobody and always will be. And your picture? hahahahhahahahah.”

All right. First and foremost, I do not, nor have I ever claimed to be an attorney, a lawyer. I’m not have not been to law school. I do however, work with some of the best lawyers in this country on a daily basis, not just here in the city of Pensacola, but all over the country. I have interviewed damn near every living member of the trial lawyer hall of fame. Something that I can promise you, Mr. Avenatti, you are never going to be a part of, I am the executive editor of the trial lawyer magazine, but I’ve never said I’m a lawyer. In fact, in multiple different interviews, I have actually had to tell people when they’ve called me a lawyer say, no, no, no, I am not a lawyer. But if you’ll notice at the bottom of that little message says I’m no longer allowed to uh, respond to that. And the reason is because right after sending this and accusing me of something, by the way, that I never did, which is why I’m even talking about this, he blocked me. There it is right there. Blocked, can’t look at his stuff. Luckily I have an audio was not smart enough to block The Ring of Fire Twitter account so we can still access all of his stuff via that because he’s really not that bright and clearly not that great at research either.

Um, and I did. I tweeted out this message, I wanted everybody to show what a totally normal, stable guy, Michael Avenatti is when all I did was point out what was originally reported on April 11th of this year and that is that according to the charges against him, Michael Avenatti was allegedly stealing a ton of money from his clients. He is a fraud. He is a disgrace and he should be immediately disbarred and then spend some time in prison because he, he, he is the piece of shit here and I am going to go ahead and read you some of the charges against him. This is from the April 11th issue of the Washington Post. You can find a link to it in the description of this video just in case anybody wants to fact check it. First and foremost, you had him arrested early April when he tried to allegedly, although we’ve seen this stuff, extort millions of dollars from Nike by saying, pay me lots of money or I’m going to disclose some of the bad things you’ve done.

That’s extortion. In fact, the US attorney in Manhattan said the actions were quote an old fashioned shakedown. But here’s the other ones, and this is actually from the indictment, which has 36 different counts against Avenatti. By the way, Avenatti would misrepresent, conceal and falsely described to the client the details of the settlement and its funds routing the money instead into accounts he controlled. He would view as the money for himself and lie to clients about whether the settlements were being paid or delayed. The indictment stated the indictment also includes specific accusations about how Avenatti allegedly defrauded people. Uh, in the case of a paraplegic client, Los Angeles County, he had agreed to pay a $4 million settlement to dismiss a lawsuit over constitutional violations that caused him severe emotional distress and severe physical injuries including Paraplegia, the indictment states. Um, and what happened in that specific case is that Avenatti ended up pocketing most of that money and caused the paraplegic to lose his, uh, social security disability benefits.

That’s the worst thing an attorney could do. Like you made things so much worse for your client, even though you one wow, you suck. Avenatti. Other allegations in the indictment also depicted Avenatti as vacuuming up money owed to his clients and then misleading them about what was happening in a case involving another client’s settlement over a little, a little more than two months off, and it caused approximately $1,599,400 of the initials, one point $6 million settlement to be used for his own purposes. So basically you spent all but $600 of this guy settlement the indictment states. He then told the client he was still working on getting the payment. You were as this indictment, state’s stealing money from clients. Now you maintain your innocence and you have not been convicted of any of this. So as right now, yes, all of these are a legend. So you do have that presumption of innocence, unfortunately. And as a lawyer, you should know this, the documents in the case tell a completely different story. And Mr. Avenatti. I’m going to conclude by saying yes, one of us is 100% full of shit and a disgrace, but it ain’t me.