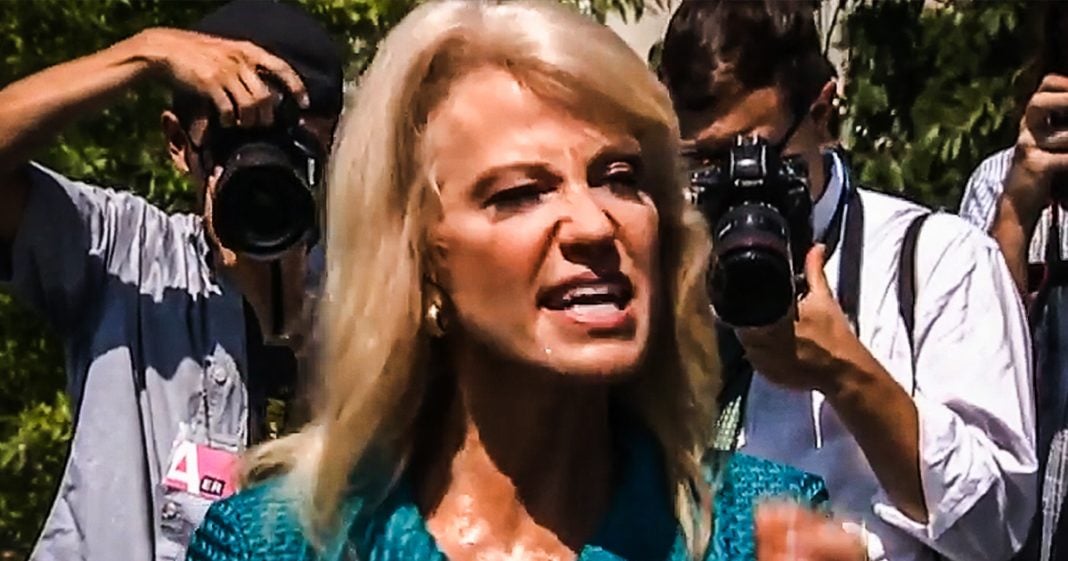 Kellyanne Conway stunned the country yesterday when she demanded to know a reporter’s ethnicity after he asked her a question, but that’s only the beginning of the story. Conway went on to have a complete breakdown, shouting at the entire country because her and Trump are “sick and tired” of most of us who won’t blindly fall in line. Ring of Fire’s Farron Cousins discusses this.

Farron Cousins:             So by this point, everybody’s pretty much aware of the fact that yesterday Kellyanne Conway basically pulled a papers please moment on a reporter by straight up asking him after he asked her a question, what’s your ethnicity? And we all know exactly what Kelly and Conway is trying to do and everybody has been talking about this. But as bad as that is, she kept going after that. And it was her continuous talking and the basic de evolution of that entire thought process she was having that really became the spectacle. So here is the full clip of Kellyanne Conway asking the reporter his ethnicity and then going off on this really insane tirade. Take a look.

Reporter:                      “If the president was not telling these, these four Congress women to return to their supposed the countries of origin, to which countries was he referring?”

Kellyanne Conway:         “No, no. Because I’m asking you a question. My ancestors are from Ireland and Italy.”

Kellyanne Conway:         “And you know everything you’ve said since and to have a full conversation…”

Kellyanne Conway:         “The president’s already commented on that.”

Kellyanne Conway:         “The president, the president’s already commented on that and he said a lot about this since, since that one tweet. No, he’s put out a lot of tweets and he made himself available to all of you yesterday.”

Kellyanne Conway:         “Yes he has. He’s tired. He, we, a lot of us are sick and tired of this country, of America coming last. To people who swore an oath of office, sick and tired of our military being denigrated sick and tired of the Customs and Border Patrol people, the protection people I was with who are overwhelmingly Hispanic by the way in McAllen, Texas. Sick and tired of them being, no, you don’t understand because you didn’t go being criticized being doxed by a bunch of Hollywood D-listers who have nothing else to do but to sit on their asses on Twitter all day and try to dox brave men and women who are diving into the Rio Grande to save people who are drowning, who are taking other people’s babies into custody and diapering them and feeding them and looking the other way while people were running across with drugs. That’s going on.”

Farron Cousins:             Okay, so obviously she’s going to ask the reporter is ethnicity because that’s just, I guess what she wants to do now. Trying to make some kind of point, even though it didn’t make a point other than if people did come here from another country. Doesn’t that actually undermine Donald Trump’s point of let’s keep people out.

If she’s trying to point out how many people have diverse backgrounds, they’re not native Americans, but her whole tirade after that, you know we are sick and tired, sick and tired of all these people being mean to the troops and being mean to the border patrol and not falling in line with the president’s agenda. And of course that weird line about D-list Hollywood actors wanting to get off their asses. I see. I still don’t understand that but, but you do you Kellyanne. But there’s another statement that she said, and I do not believe it was in that clip, but here it is and this is where she was talking about, you know the squad. What the president is doing is we are tired, sick and tired of many people in this country forget these four. They represent a dark underbelly of people in this country of people who are not respecting our troops, are not giving them the resources and the respect that they deserve.

It does exist and I would love to see you forced in there, see how you like being thrown in a little cage, although I’m sure they would give you a toothbrush and a soap and food if you needed it, but I’m willing to bet you it also crack in about five seconds under that kind of pressure. You also have no right to ask a reporter their ethnicity. You are there to answer questions. He asked you a question, then you asked him a question and when he asked why you asked that question, you said, because I’m asking a question that’s not how this works and I’m glad that reporter stood up and said, why is that relevant? And Kellyanne Conway again was unable to actually accurately answer that question, but her insane little tirade there of being sick and tired of Americans. I mean hell, isn’t that the entire conversation the White House has been having recently? If you don’t like it, get out. So is Kellyanne going to go home now and pack a bag and just leave, if she wants to do that, I am sure that most of us in this country would not only be okay with it, we’d likely celebrate it as well.