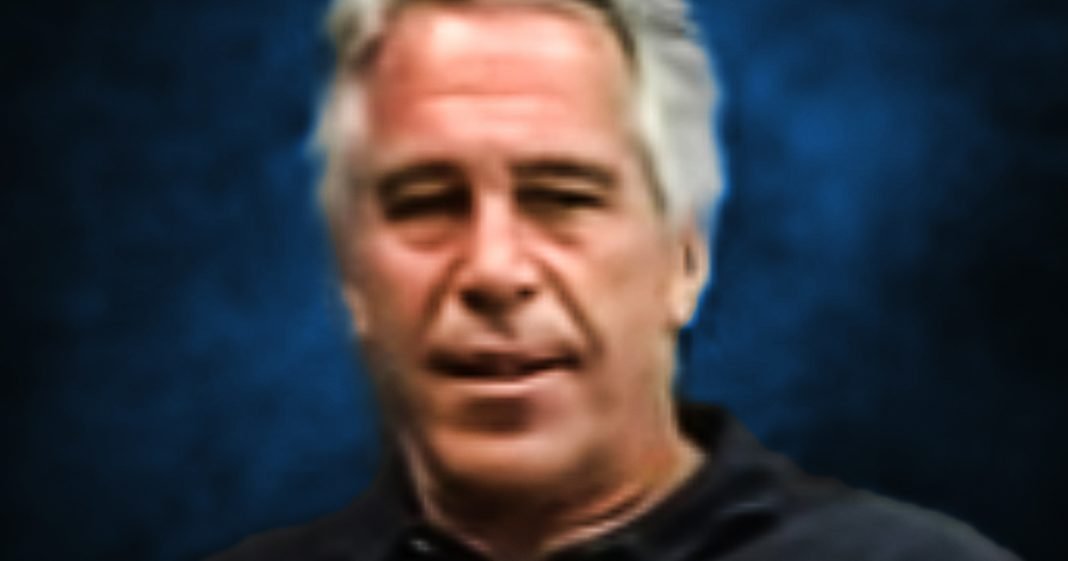 According to a lawyer representing victims of Jeffrey Epstein in Florida, the billionaire actually continued to abuse underage girls even while he was serving his disgustingly lenient prison sentence years ago. At least one woman claims that she was forced to have sex with Epstein while he was in prison, showing that this man has not been rehabilitated and that he is a very real threat to society. Ring of Fire’s Farron Cousins discusses this.

Got some major new developments in the Jeffrey Epstein case this morning when it was revealed that Epstein allegedly continued abusing women while he was serving his 13 month ultra-lenient prison sentence down here in the state of Florida many years ago. Just in case anybody needs a refresher. Let me go ahead and give it to you right here. As part of that 13 month prison sentence, Epstein was allowed to leave his jail cell for up to 12 hours every single day to go to work and that’s where he had to stay. You had to be at work and according to the police department down there, the sheriff’s department, they said, Whoa, none of this happened. He could not have continued abusing women while he was on his little 12 hour work release every day from 8:00 AM to 8:00 PM because we wouldn’t even allow him to go to lunch. We would not allow him to go anywhere without that off duty officer that accompanied him and stayed with him at his office.

Every day we had a log. If anybody came in, they had to sign in. They had to sign out. He couldn’t leave. The office except to go to a doctor’s appointment, which the officer accompanied him to. So there’s no way any of this happened. Well, okay then I guess that’s a cut and dry, right? Well not exactly because the sheriff’s office is being dishonest about the entire thing. And that is also part of these latest revelations. In fact, these are actually revelations that we knew about years ago. And here’s why I say that. First and foremost, this off duty officer that was stationed with Epstein during his work release, guess who paid for that? Jeffrey Epstein. So that off duty police officer was actually technically by definition, an employee of Epstein. Who knows what kind of cash bonuses he threw his way. If that happened. I’m not alleging that it did, but based on Epstein’s history with paying off potential witnesses, which we also learned earlier this week during his bond hearing, I wouldn’t put it past him whatsoever.

And I think that a, that officer or officers, if there were multiple who switched out, um, I think that’s the kind of person who’s deposition needs to get on the record immediately to find out what the hell actually happened. But that’s all speculation, right? We got to deal with the hard truth. The hard facts of this matter. Well, how about the fact that the palm beach post had already revealed that Epstein frequently left his office. He frequently broke the terms of his work release program and never once got punished cause the sheriff’s offices telling us know if he ever broke any one of the terms at any time we would have terminated it. He would have sat in county jail for the rest of his lenient sentence. But he did break it as the palm beach post had reported. There was one time when they found Epstein just walking down the street, dripping in sweat, slightly disoriented and his excuse was, oh, I just took a different route to work.

I went away a different way, but he wasn’t even allowed to be walking on the streets because he had a driver pick him up from the prison driver, dropped him off at work, driver would take him back to the prison. Epstein was not allowed to go out and just be walking the streets. He wasn’t also, cause that’s not the only one. There was a time when lawyers, not lawyer, excuse me, the probation officer, whoever it was, corrections officer went to Epstein’s house to find him because he wasn’t at his office and when they knocked on the door, car pulled out of the driveway and left. So the officers are just like, Oh man, I guess we’re just come back. Later. They came back later. Epstein opened the door and according to the Palm Beach Post, because those officers couldn’t say definitively that Epstein was the one who drove the car.

They just decided to say a, you didn’t break the terms of your probation? No. No. Idiots being in the house was a breaking the terms of the probation. There’s also, according to the Palm Beach Post, he regularly, during his prison sentence, folks regularly fly to New York, Boston, Miami, and his private island. During these trips, he did not have to report to probation officers, uh, about where he was or what he was doing. I think this actually may have been after his prison sentence. So sorry. Let me correct that. This was while he was just on probation. What he also wasn’t even allowed to do those things though Epstein routinely broke the rules. The sheriff’s office routinely turned a blind eye to these violations. So their word is absolute garbage right now. So when we have these lawyers, lawyers who I’ve actually, uh, spoken with and worked with slightly, when they’re telling us that Epstein was still abusing young women, these might not have been under age, but they were certainly under the age of 21, still abusing them while in prison. Then I think we have our answer on whether or not this monster deserves to be granted bond on Thursday. We’ll get our answer tomorrow, but if this man is allowed to go back and walk the streets or even be put under house arrest, just to remember that they’ve tried that before. He broke the terms and according to the lawyers representing the women, never once stopped abusing them.