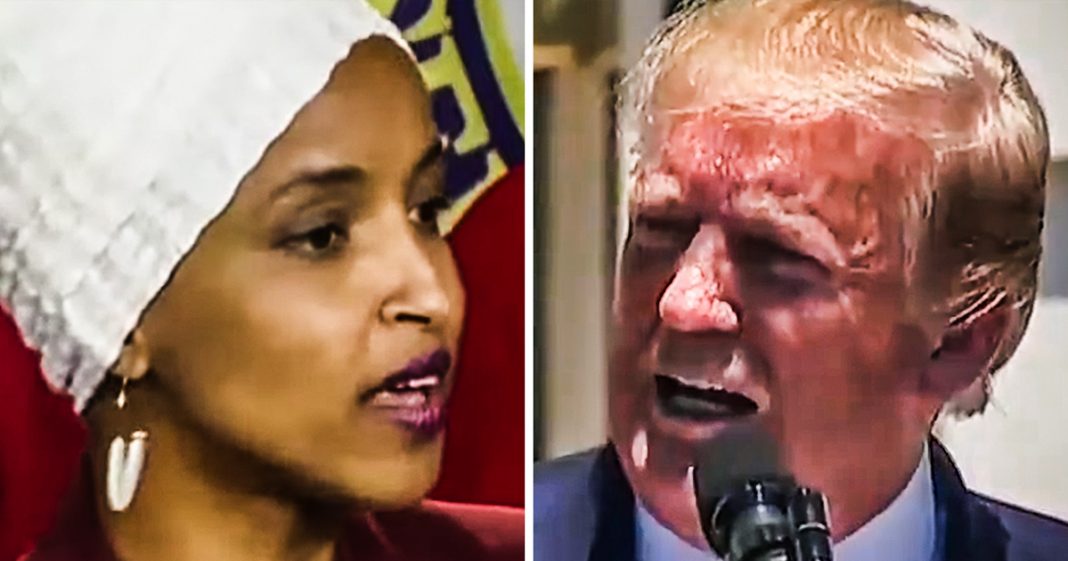 During a speech on Monday, Donald Trump doubled down on his xenophobic comments about “The Squad,” going even further in his attacks on Ilhan Omar. He linked the Congresswoman to extremist groups and claimed that she hates members of certain religions, which isn’t rooted in reality at all. Ring of Fire’s Farron Cousins explains how this latest speech proves that the President is not mentally stable and must be removed from office now.

Farron Cousins:             During his little press conference yesterday, of course, after telling us that if we don’t like America, we need to go home and pack a suitcase and get the hell out. Donald Trump’s little speech took an even worse turn, if you can imagine. Here it is.

Donald Trump:              “I guess some people will. One of them is polling… One of them is polling at 8… One of them is polling at 8%. So one of them is polling at 8%. So when I hear people speaking about how wonderful Al-Qaeda is. When I hear people talking about some people, some people with the world trade show, some people, not, some people, much more than some people. When I hear the statements that they’ve made, and in one case you have somebody that comes from Somalia, which is a failed government, a failed state, who left Somalia, who ultimately came here and now is a congress woman who’s never happy, says horrible things about Israel, hates Israel, hates Jews, hates Jews. It’s very simple. And if the Democrats want to wrap their bows around this group of four people. One of them kept Amazon out of New York. Tens of thousands of job would have been a great thing. And she kept Amazon from going. Would’ve been a good deal. I mean, could he have made better? Maybe, but tens of thousands of jobs and New York has not been the same since that happened. It’s really hurt New York and New York City. Amazon was going to go there. We’re going to relocate a major section of their business in New York. She kept him out. That was a terrible thing she did. A terrible things she did. So here’s the story. Here’s the story. I see them complaining. They’re complaining constantly…”

Farron Cousins:             So let’s start with the first part of that. Donald Trump talking about Ilhan Omar saying that she actually loves Al-Qaeda and that she hates Jews. “She hates Jews.” Those are the words he used, “She hates Jews.” Hates Jews. That is inflammatory. That is completely false. And statements like that, you know, along with the she praises Al-Qaeda. Uh, those statements are designed to get people hurt. That is Trump’s goal. Here I am 100% convinced of that. He has put representative Omar’s life in danger and he knows it and he’s happy about that. Yeah. We have already seen these women, you know, representatives, Omar, Ocasio-Cortez, Pressley, Tlaib. They all to a degree have had to kind of ramp up their security. They have had to go through special training, they are getting death threats and when the president comes out and makes these false and derogatory statements about them, all that does is amplify those voices who wished to silence these women forever. Presidents not playing four dimensional chess here, trying to say, watch me get Democrats to defend these women. Know what he’s doing is trying to silence his critics by any means necessary because these are powerful women. These are smart women. These are women who have already made more of a difference than most members of Congress could ever hope to in their 30 year career.

And they’ve all done it in just seven months. And that terrifies Donald Trump. Powerful women have always terrified Donald Trump. And that’s why he’s launching these attacks. The part about Ocasio-Cortez fighting Amazon and kicking them out of New York and losing all these jobs. Yeah, Amazon’s actually still coming, except now we don’t have to give them all the subsidies. So you’re 100% wrong about that as well. And this is again, verifiable as are the fact check statements that show that a representative Omar did not diminish the nine 11 attacks as just off some. Some people did a thing. Yeah, that, that’s not exactly how that went down, but Trump’s never wanted to let facts get in the way of a good rant. But to me what this ranch showed yesterday is that this man is a danger. This man is unstable. This man is mentally ill, and this man is on fit to be president of the United States and needs to be removed from office immediately. There is no other way around it. Trump is crazy. He’s not well.

And at this point, based on all the responses I’ve seen from Republicans to his speech and to his tweets, I’m beginning to think that the rest of the Republican Party is not mentally well either. These are deranged individuals coming out and supporting this man, and as long as they keep supporting him, he’s going to keep saying this. And eventually it’s going to cause very real and serious harm to somebody that he really doesn’t care if it happens too. And I think that’s the point of this. He understands his supporters are crazy. He has seen the headlines of Trump supporter, arrested, you know, oh, this person was found with all these guns and stuff making bombs and they’re trying to kill members of the media and they got a kill list featuring these members of Congress. Trump knows he has supporters like that out there in this country. And that is why he keeps attempting to demonize and vilify these women because maybe, maybe, maybe something will happen. And that’s why this sick and twisted and deranged individual needs to be removed from office today. This isn’t even a partisan issue anymore. He is putting people’s lives in danger with his statements.

They need to invoke the 25th amendment. There is no way this man prove that he is mentally fit and capable of carrying out the duties of the office of the president and get him out of office. And what’s funny is that, you know, we’ve been saying that for quite some time, that this should happen. Then you have all these people on the left. Well Pence is just as bad. I don’t buy that crap anymore at all policy-wise. Yeah. But do you think Pence would have gotten up there and done that press conference yesterday? No. You think Pence would’ve tweeted out the xenophobic comments on Sunday? No, he wouldn’t. Pence is a horrible, crappy human being. He’s an absolute liar, just like Trump, but he’s not dumb or dangerous enough to do those things. And that is the difference. And for some people in this country that may make all the difference in the world.