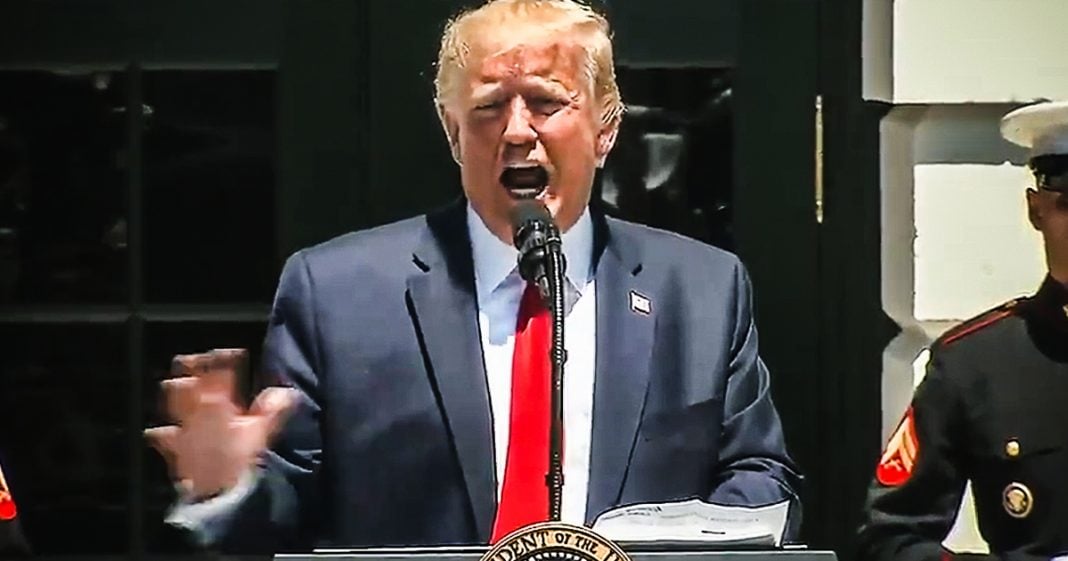 Donald Trump believes that those who “hate” America should pack up and leave, but that would mean that the entire Republican Party would have to get out of the country. When you drill down to it, Republicans are the ones who hate this country, and that is obvious through their policies. Ring of Fire’s Farron Cousins explains how Republicans disguise their hatred of this country as patriotism, and why we shouldn’t buy into their lies ever again.

Farron Cousins:             So that was Donald Trump speaking at his little xenophobic press conference yesterday, and he makes it very clear. If you hate America, get the hell out. And under that pretense, I hope every single republican in this country is packing up. Because when you drill down to it, when you really start to look at what each party actually stands for, it is clear that one party does hate America and that party happens to be the Republican Party of the United States. Believe it or not, this is actually a topic Republicans hate America that I have been sitting on and stewing on for the last 15 years. At one point, I even considered writing a book, actually calling it Republicans hate America, and then explaining all the reasons why never got around to it. So that’s what I’m doing right now because here’s the thing, when you think about what is America, what is it? Is it the piece of land? Is it the government itself or is it the people?

Those are basically the three things that make America. You got to have the land, you got to have the government, then you got to have the population. And in each one of those instances, as we have clearly seen from the Trump administration, we saw it from the Bush administration. Republicans hate it all. I mean, Republicans are the ones who literally run for government telling us that government sucks. Marco Rubio told us that, man, he hates it up there. It’s awful. The government, the body that runs this country is crap. Donald Trump tells us all the time that Congress sucks. He tells us that our intelligence agencies suck. They tell us that everything is awful. They hate it. And is that not America? The population itself.

They’re letting people die in this country. Headline, just this morning, another person died in this country because they were having to ration their insulin because they couldn’t afford it. They couldn’t pay to get that prescription refilled so they rationed it and it killed them. Now, you may not outright hate these people, but your policies certainly punish them for no reason whatsoever. We could have solved this issue of drug pricing decades ago, but we, you know, just decided not to. Republicans had been in control at least in a house and Senate for the majority of that time and just said, Nah, we’re not going to do it. We, we’ve tried actually in the last two years also to pass legislation to fix this problem and Republicans have said, nope, not going to do it.

They may not outright say they hate us, but their policies show that they hate us. They lie to US constantly. They lie to us about the tax breaks. Donald Trump lies to us about who’s actually paying his tariffs in his trade war. They caught on Wall Street and billionaires because those are the only folks they actually love. Meanwhile, the rest of us were getting screwed over left and right there. Cutting regulations that keep us safe at work. They’re cutting regulations that protect the environment. And that’s the third part of what is America. The land itself. This country is America and Republicans more so than the Democrats, but not exclusively. I don’t care if we destroy every bit of land that we’re currently standing on. They don’t care if we destroy our coast with more offshore drilling, which the Trump administration has tried to green light. They don’t care if we destroy all of our lands and sacred grounds in this country by running a highly dangerous pipelines through them. They don’t care if companies like Dow Chemical, Monsanto, any of these other agrochemical giants, they don’t care if they’re dumping all their toxins into our waterways, poisoning Americans, poisoning the environment, poisoning the entire food chain.

That’s hate. Republicans hate America. No matter which way you slice it. It’s not the people like the, uh, the squad because I guess that’s what we’re going with now. They don’t hate this country at all. They hate the direction it’s going, as do most of us. I’m right there with them and they actually want to make it better. Republicans are actively trying to make this country worse. They’re trying to impose their religion on the rest of us with their laws. These abortion bands, those are rooted in the religious right in Christianity, or at least some skewed version of Christianity from these right wing politicians.

Well, the Constitution says you can’t have that. That’s the rule of law here in the United States. But Republicans don’t care about that. They don’t care about the constitution, except of course the second amendment, everything else. They’d rather just torch it because they hate it because it gets in their way. They want to be authoritarian leaders, but that constitution, our laws, our checks and balances are the only things stopping them, and they would be grateful to see them all destroyed. So yes, there is a political party that very clearly and obviously hates America, but it damn sure isn’t the Democratic Party.