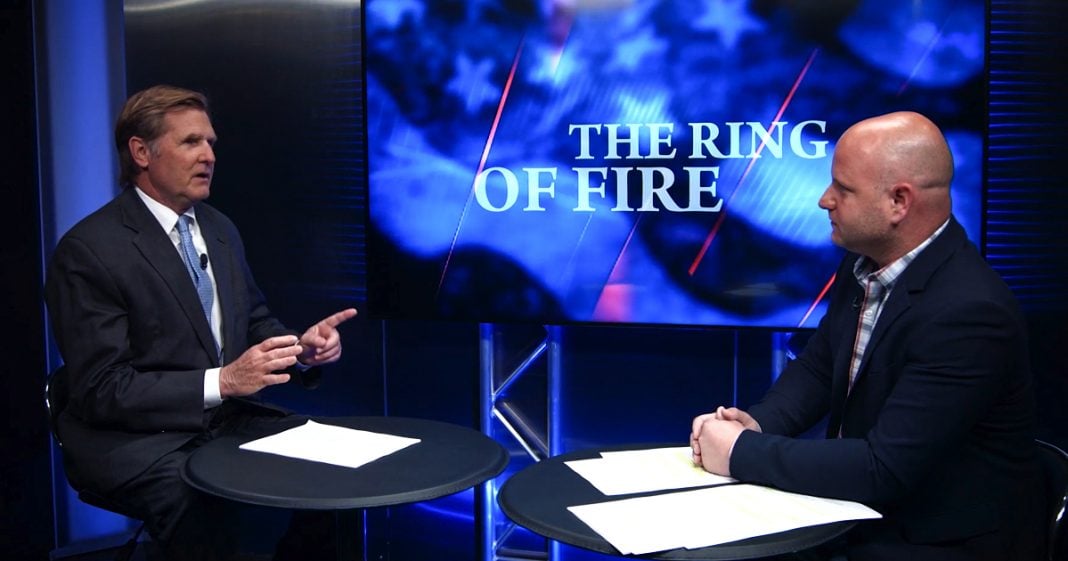 Some of your favorite foods, including the ones that you give your children every day, are full of Monsanto’s Roundup, and yes, it is poison. Ring of Fire’s Mike Papantonio and Farron Cousins discuss this.

Mike Papantonio:             Some of your favorite foods, including the ones that you give your children every day are full of Monsanto’s Roundup and yes, it is poison. Incredible story, we’ve covered this from time to time. Monsanto, every time we cover it, we get ugly notes from them, ugly mail. We don’t really do all that. Well, yeah, you do. And just full disclosure, I’m actually suing Monsanto for their Roundup product. I’m actually taking depositions. I’m seeing it firsthand. I’m sitting their witnesses down and asking the witnesses questions. I’m seeing the documents that tell this story and it’s an ugly story. So, so tell us what we ought to be worried about right now as far as the foods that we’re feeding ourselves and our family.

Farron Cousins:                  I mean, basically look, Monsanto controls the seeds, they control the Roundups. You know, they, they’ve got a, I think with about four other companies basically control most of the agriculture.

Farron Cousins:                  And so there’s a good chance when you go to the store, buy something made from any kind of grain, wheat, corn, soy, it’s contaminated with Roundup. And that’s what these independent studies are showing us. Quaker Oats, Life and Square cereal, Gerber and Beech-Nut baby oatmeal. Cheerios, most popular cereals in this country, people give it to their kids in little baggies as snacks throughout the day, all contaminated with glyphosate. Which by the way, remember we covered about a week or two ago, they’ve determined now there’s basically no safe level.

Mike Papantonio:             Now that’s so important that they understand no safe level because the company didn’t take time to establish a safe level. Because the company ginned up studies, created false studies, gained studies. This got onto the market and once it got on the market, it simply took off. And now we know it damages, there’s genetic damage, birth defects. I mean, liver damage, kidney damage, blood cancers. So, so here, this is what’s so interesting about this. We know its in wine. We know it’s in beer. We know it’s in all these cereals that you’re talking about.

They’ve had no exposure, no direct exposure to Roundup. And all of a sudden we’re finding it in the food we eat and they’re finding it in the urine of people, you know, weeks later. I mean, it’s, there’s, there’s no question here. The, for somebody to say, no, this isn’t so, you’d have to be a moron. I mean, it really, this is so overwhelming. Now when we do this segment on our site, there will be Monsanto trolls. And tell us about that part of the story people don’t even know.

Farron Cousins:                  Well, that’s what’s really interesting about all this too, is that Monsanto has hired and they’ve been doing this for years. I, I’ve been attacked on Twitter by people that I have gone through and had to look back at their profile. Find, they work for Monsanto. They’re scientists there.

Farron Cousins:                  So they do have their people, whether they’re in house or they contract it out. They go online, they work, they find these stories talking about how bad Roundup is or glyphosate, and they go out there and attack them. They try to attack people’s credibility. They attack, attack the sources that they use, saying, oh, well this source, you know, they’re, they’re not reliable. You need to look at this study and they’ll redirect you to a, a friendly study.

Farron Cousins:                  And basically all they have to do is they type out an email, say, hey look, we’re, we’re looking for somebody to write about glyphosate because we promise you it’s not nearly as bad as what the World Health Organization says, or every single independent group. So could somebody maybe validate our claims and then the scientists come in and say, hey, I’ll do it for this. I’ll do it for this.

Mike Papantonio:             It’s worse than that. At, what I’ve found is they are, the company Monsanto itself is actually writing the literature, right? Okay. So they write the literature that’s going to be published and gonna say, well, the World Health Organization got it wrong. It doesn’t really cause cancer. And what we find out now, company wrote it and these, these scientists to be paid a couple of hundred thousand dollars say, yeah, I’ll put my name on that. Even though they know it’s a lie. They, they know the impact, the, the health impact internationally is huge.

You know, okay. So now we’ve got Monsanto teaming up with Bayer. All right. Now how ugly can that possibly get? You got the two companies in this, on the globe, that are probably in the top five companies sued more than any company on the globe. Now they’re coming together to call, to start BS, BASF because the truth is the rap on these companies is so bad they have to hide behind a new name.

Farron Cousins:                  Well yeah, and Bayer when, you know, immediate, I think it was two days after the DOJ here approved the merger. It’s still has a little bit more to go through, but Bayer immediately came out and said, okay, great. We’re going to drop the Monsanto name. We’re not going to use Monsanto as if that’s somehow going to exempt them from all of the liabilities that that company has built up over the last few decades. It won’t. There’s still…

Mike Papantonio:             Well, that’s what they do. Matter of fact, I caught DuPont, as we’ve talked about before, poisoning the water up in the Ohio River Valley. What DuPont tried to do was create another company and, and, and say that other company, you’re responsible for all the liability, all the death, all the poisoning, all the problems that you’ve caused internationally. You’re responsible for that now. And oh by the way, you probably don’t have enough money to pay for all of it. So declare bankruptcy and we’ll tie the whole thing up in bankruptcy court. That’s kind of what we see happening here. Monsanto knows the gig is up, they know people are dying from non Hodgkin’s lymphoma, blood cancers, a whole host of physical problems. So that’s their next move.

Farron Cousins:                  Well, well, it’s a corporate shell game really. You know, DuPont’s done it. We’ve seen companies here down in South Florida do it when they buy an area where the water was just contaminated because they bought the corporation. They’ll spin off a shell company, say, okay, you own the liability on this water thing, but we’re going to fund you, you know, $100 million, but you’re facing $2 billion in liability.

Farron Cousins:                  So you, and I guarantee you we have not seen it yet, but Bayer is going to try to do the same thing with Monsanto and maybe create, you know, a Bayer-Mon Chemical.