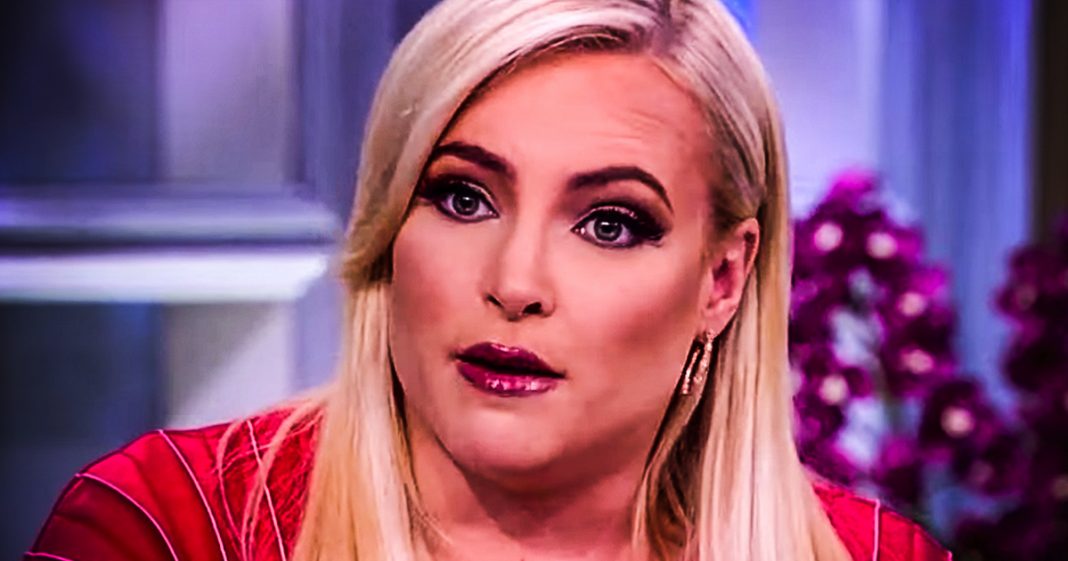 The View cohost Meghan McCain is not happy with Donald Trump because, as she put it on Monday, he makes it really hard to be a conservative on television these days. This is your Party now, Meghan, and Trump is tied around the necks of every single person still carrying a Republican voter registration card. You can’t escape it, and whining about it only shows how selfish you are. Ring of Fire’s Farron Cousins discusses this.

Farron Cousins:             One of the things I love about Meghan McCain. In fact, the only thing I love about Meghan McCain is her weird ability to take anything going on in this country and make it all about her. That is a remarkable talent that this woman does not get enough credit for. Possessing. Yesterday on The View, Meghan McCain and the other co-host on The View very obviously had to talk about Donald Trump’s disgusting Twitter tirade from Sunday and show Meghan McCain when it came her turn to speak wind about the fact that Donald Trump’s horrible racist comments make it so hard for her to do her job. It’s so sad when she has to go out there as the lone conservative and Trump has done something horrible and now she’s in this awkward place. Oh, won’t somebody think of Meghan McCain’s feelings here folks, the woman is hurting. Oh, because she decided to hit her wagon to the Republican Party. Here is a, here’s the full quote from Meghan McCain on Monday on The View she said,

Meghan McCain:           “For me, as the conservative representative on this show, I was so upset coming back yesterday… I was in D.C. with my husband, and I came back, like, this is what people think all conservatives are now, and we are not.”

Meghan McCain:           “The cowardice I’m seeing Republicans not speaking out and saying this today is embarrassing… It’s deeply cowardly.”

Farron Cousins:               Meghan, here’s the thing though. As I mentioned, you said they think all conservatives is like this bowl. We’re not okay what you are. I mean really like when you look around you, when you go to DC and you see these lawmakers, you know they were friends of your fathers, your Hob Knob, them with a right now they’re, they’re like that too. The only differences. Trump’s had the quiet part out loud and that’s what you don’t like cause now it does put you in the awkward position of having to address the fact that your party is basically a bunch of racist. It’s not your fault you didn’t start the party, but you damn sure made the decision to join it. That’s on you by joining the Republican Party. And this is not just directed to Meghan McCain, this is to anybody out there who is a card carrying member of the Republican Party. This is you. Now Donald Trump is the defacto leader of the Republican Party. By virtue of him being president of the United States, just like Obama was with the Democrats when he was president.

And this is what your leader says and you can condemn it. We’ve seen of Republicans come out with their backhanded little like, oh, I don’t ever agree with these four women, and I think they’re horrible people. But Trump’s comments were a little harsh. That’s the typical response we’re now seeing from Republicans is like, these women aren’t garbage, but Trump should’ve used different language that that’s not denouncing it. That that’s basically saying, I also hate these women and I don’t want to lose poll points. You’re all like this. This is what your party has become. This is what you represent now, and you can either choose to own it and be the Party of disgusting. Dare I say deplorable individuals or you can leave. I know. Shocking, right? I don’t know if Meghan McCain understands that, but, but you are more than willing and able and allowed to leave a political party.

It’s not a life sentence. You could change your affiliation today, be an independent. You could expand. Your horizons may be like I actually used to back in your youth when you weren’t a Republican and before, helping people be in favor of allowing women to have the right to choose what to do with their own bodies. Be in favor of not putting children in cages on the border, but you embrace all of it as does every single person that remains with that Republican Party today. You cannot distance yourself from it. You either own it or you leave it. So if you stay, even if you try to condemn it, you’re still owning it.