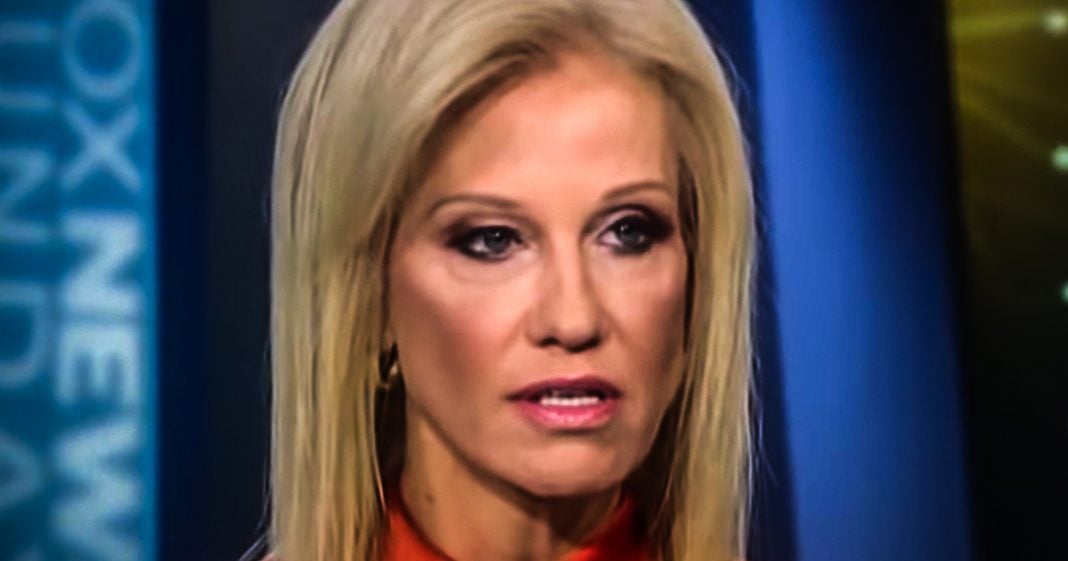 Kellyanne Conway followed the advice of the White House and refused to appear before a House Oversight Committee this week, even though she had been subpoenaed to show up. This could lead to another legal showdown for the Trump Administration, or the Democrats could simply roll over and pretend they never issued the subpoena in the first place. Ring of Fire’s Farron Cousins discusses this.

So yesterday was Kellyanne Conway’s, uh, basically her big debut in front of the House oversight and Reform Committee. She was going to show up, talk all about her Hatch Act violations, clear the air for everybody, and so we could move on from this issue. She had been subpoenaed to show up. Everybody was ready and waiting, and then she didn’t show up. Kellyanne Conway yesterday, on Monday, decided she was going to defy a congressional subpoena, all because White House counselor Pat Cipollini said No. And Donald Trump said no. In fact, here is the statement that White House counsel Pat Cipollini released. He said, Ms. Conway cannot be compelled to testify before Congress with respect to matters related to her service as a senior advisor to the president because of the constitutional immunity and in order to protect the prerogatives of the office of the president, the president has directed Ms. Conway not to appear at the committee’s scheduled hearing.

Should we even Cipollini in his admission that, yeah, we’re not going to send her, said that this was the president’s decision. Donald Trump is the one who said, Kellyanne Conway do not go over there and talk to those Democrats on the House oversight and reform committee except Mr. Cipollini is a rationale, really isn’t rooted in the law whatsoever. He’s making crap up, which as a lawyer, um, you’re not supposed to do Mr. Cipollini. I would think you would know that like, isn’t that something that you should be taught in law school? You can’t just make up new laws because you want to get out of something. Here’s the thing.

Nobody was even going to be talking to Kellyanne Conway about her advice to the president. This wasn’t even a matter of the president. This was about Kellyanne Conway violating the Hatch Act repeatedly and the office of special counsel recommending her for termination because she is in their own words, a repeat offender. To put it a little bit more bluntly, Kellyanne Conway can’t stop breaking the law and that’s actually what it happened Monday. By defying a subpoena, the house could hold her in contempt. They could send the sergeant at arms to go arrest, harass, and drag her into Congress. They have the power and the right to do that. So do it. I don’t understand what you folks are waiting for. You know, you see people online, you see the folks on Twitter and Facebook saying, dammit, Congress, send, the sergeant at arms and go get her. Do something. Do something more than just a meaningless vote to say we’re voting that we don’t like her. Now that’s what a child would do. You have a job. You have a responsibility. You tried to enforce your rules. She refused. So enforced the next set of rules after that, show us that you have a spine. Show us that you deserve to be in the majority in the House of Representatives. Because right now I’m starting to question that you’re holding them accountable about as much as the last Republican Congress did, which is virtually nonexistent. And this is pathetic. It is weak. You have the tools. Go arrest her and make her sit in that little tiny jail cell in Congress until she decides to play Nice and testify.