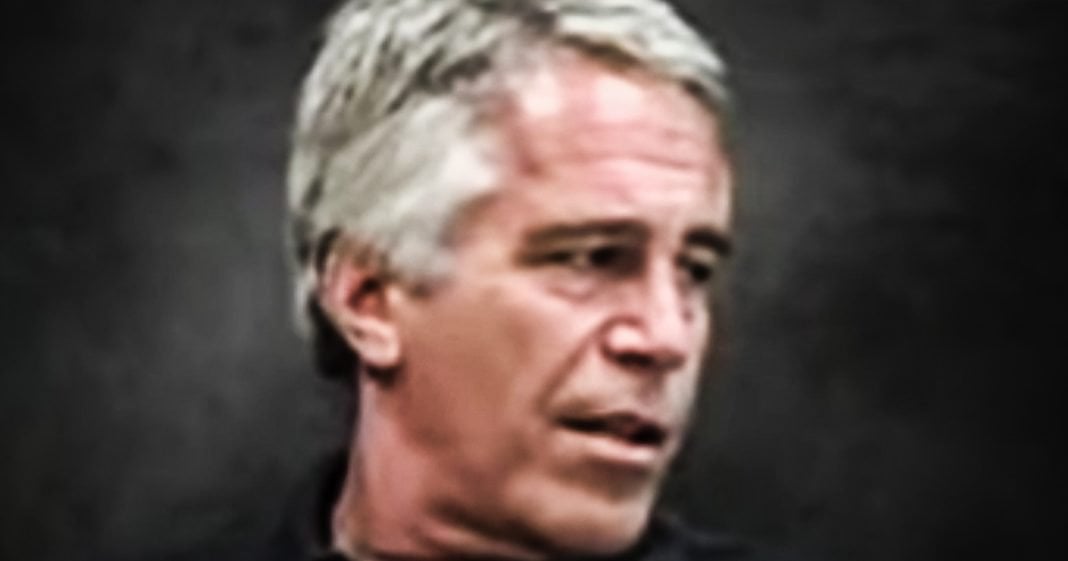 Billionaire Jeffrey Epstein was in court on Monday for his bail hearing, and things could not have gone worse for him. The prosecutors unloaded a treasure trove of new information showing that Epstein was not only a flight risk, but that his lawyers’ claim that he’s been squeaky clean for the past decade is an absolute lie. Ring of Fire’s Farron Cousins explains what happened.

Jeffrey Epstein had a really bad day in court yesterday. Here’s what happened. Jeffrey Epstein goes to court in New York with his lawyers. The prosecutors are there and it’s basically, it’s just a bail hearing, right? We’re not trying the case yet. All we’re trying to decide is whether or not Jeffrey Epstein is going to be released on bail. Basically put under house arrest in a $77 million mansion in New York until he goes to trial. Well, the prosecutors in this case, absolutely phenomenal. Prosecutors came into court yesterday and dropped a bombshell filled with new information about how dangerous Jeffrey Epstein really is, how deceitful he is and how disgusting he is. In addition to obviously having more witnesses and painting, Jeffrey Epstein has a very clear flight risk, who owns his own private jet and private island. They also told us a little bit new information here. They said, well, during the raid on Epstein’s mansion, we found a passport issued by Saudi Arabia.

Clearly Jeffrey Epstein’s picture on it, but a different name. So why in God’s name, and granted it was expired, this was issued in the 80s, but why would Jeffrey Epstein ever need fraudulent documents, right? Isn’t he allegedly a billionaire, private jet, private island can do whatever the hell he wants. Go wherever the hell he wants, at least before he was arrested and caught. Um, why would he need the fake passport? So, so that raises a lot of questions. They also found what they’ve described as a pile of diamonds in his locked safe along with mountains of cash. Now for somebody like Jeffrey Epstein who basically works in the financial industry, why isn’t all your money in a bank? Right? Why is it not in hedge funds or stock markets? Why would you need a giant pile of cash that that doesn’t make much sense. You know, this isn’t the 1930s.

So that was a little weird too. And prosecutors made sure to point that out. But obviously the big thing was that this man had a fraudulent passport from a different country. Jeffrey Epstein is very clearly a flight risk and the victims and witnesses who came forward yesterday in that hearing said that Epstein is too dangerous to be allowed to walk the streets while he awaits trial and they are 100% correct. New People are coming forward and just the week and a half since Epstein was arrested again, new people have come forward with more allegations, more witnesses, more victims, more everything. We’re finding out everything about this disgusting human being, including all of the high profile people who like to hang out with him a lot. New York Times actually had a great piece come out yesterday. George Stephanopoulos used to hang out with his guy. That’s odd and I’m sure that’s something we’re going to hear more about.

Not The obvious connections, you know to Bill Clinton and Donald Trump as well. Epstein is going to go down and I have a feeling he’s going to take a lot of DC’s powerful elite with him, but until he does finally go down, he needs to be sitting in jail. He is a flight risk. He has all the tools necessary to get out of this country and essentially disappear forever, and that is exactly what prosecutors are warning us about. Meanwhile, his lawyers, Epstein’s lawyers were arguing in court, no, he’s totally reformed. He’s a great guy, totally normal, not doing anything wrong. And the prosecutors absolutely shut that down. We will get a final word on the bail, whether or not it’s going to be granted on Thursday. And let’s just hope that the judge in this case has enough good sense to tell Jeffrey Epstein that he is going to sit in a jail cell until the day of his trial.