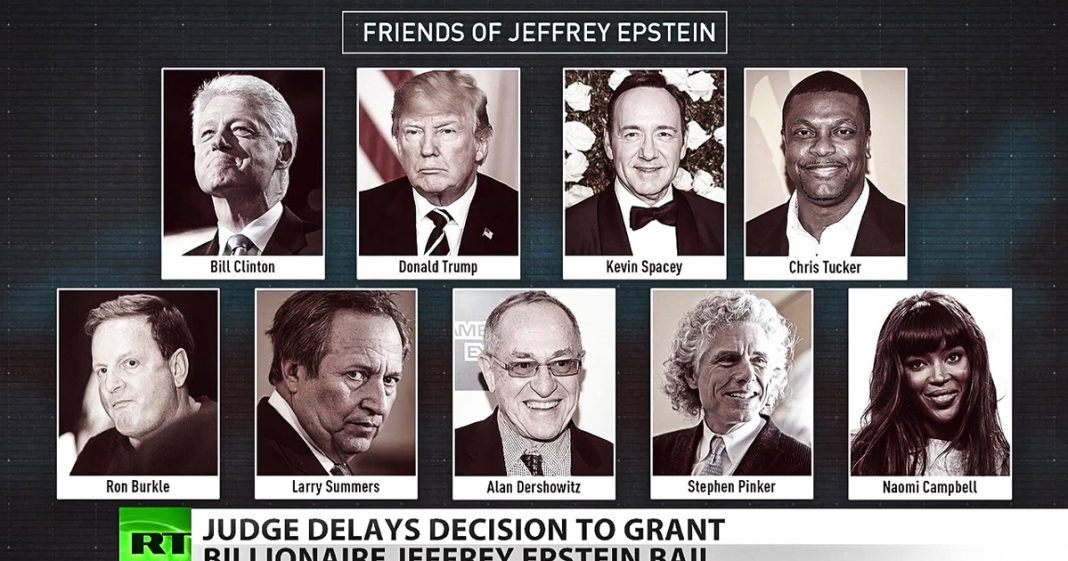 Manila Chan:                       And for more on this evolving Epstein case, we’re being joined now by editor of Trial Lawyer Magazine and Ring of Fire radio host Farron Cousins. Hey there Farron, good to see you. Here we are talking about Epstein again. So he was due in a Manhattan courtroom today for this bail hearing, we’re getting word that he’d be willing to post $100 million for bail. The prosecutors are arguing that he’s a flight risk and that he should remain behind bars, awaiting trial. What are your thoughts?

Farron Cousins:                  You know, it’s interesting, you and I talked about this last week and at the time I said, listen, a lot more stuff is going to come out in the coming weeks. And that’s exactly what happened today at the, at the bail hearing, because obviously these prosecutors were holding all of this information, did not want it to go public for a reason. They did not want to give the defense time to somehow change the public’s view, change the judge’s view. So that’s why today suddenly we learn all this information about the, the pile of diamonds that we had in the mansion. The fake Saudi Arabian passport with a, with a phony name on it. The piles of cash.

Farron Cousins:                  The $350, he a $350,000, he allegedly paid to these co-conspirators for their cooperation and other instances of witness tampering and intimidation that the prosecution presented today. They did not want to taint anything prior to this bail hearing. And that is why they came into court today locked and loaded and absolutely said okay, he says he’s had a clean record. The actions and behaviors we have seen from him, what we’ve found so far, this is not clean behavior. This guy cannot be trusted to be out of prison.

Manila Chan:                       What a wild treasure trove of, of things to emerge today. Among them, a few Epstein victims have now come forward saying that he should wait behind bars and he’s a threat to the community. The case against him appears to be getting stronger here, Farron. Are the walls closing in on the billionaire this time?

Farron Cousins:                  I believe they are and you know as his, his lawyers tried to say, oh well we had this plea agreement where there was a non-prosecution. That plea agreement, the original one, was only for crimes committed in the state of Florida. So just to clear up any confusion people may have about that agreement, it only applied to Florida. That’s why this New York case is allowed to go forward. But that’s exactly what’s going to continue happening right now is we’re going to have more women coming forward saying, I was one of these people. I have names of people who I was forced to serve while I was a essentially a sex slave for Jeffrey Epstein.

We’ve already seen it happening with Dershowitz, with his brilliant legal defense of I couldn’t have had sex with her. I kept my underwear on the entire time. We’re going to see more stupid statements like that. The more people get roped into this. Bill Clinton already caught lying about the number of times he flew on Epstein’s jet. Donald Trump saying, oh no, we had a falling out years ago. Come to find out the two of them, Trump and Epstein attended a party with only 28 other girls there. This is gonna get so much worse for a lot of very powerful people who have basically been able to, you know, escape scrutiny for this for well over a decade.

Now Trump’s labor secretary, Alex Acosta resigned last week amid all this pressure for him to resign because of that, that sweetheart deal that he brokered back in 2008 down in Florida where you are. How many other big names you’ve mentioned, you know, Bill Clinton, the president himself. How many other people do you think are going to go down this time?

Farron Cousins:                  Well, it’s going to be very interesting. I wish I could put a number on it. I wish I had more names to speculate about, but you have to keep in mind too, we’ve seen a lot, just good God. Just this past, you know, seven, eight months, we have seen so much happen here in the state of Florida, especially down in the Palm Beach area. You know, near Mar-a-lago, all of that where all of these big name people, you know, Robert Kraft with the massage parlor. This area in Palm Beach we’re talking about, this is a hot bed of political, powerful, wealthy people.

So it is likely that there’s going to be other big names. But yeah, as of right now, anything I say would be pure speculation based on just who’s ever been to Palm Beach. So I, I, I mean, I’m almost excited, I guess, to see this play out because again, we have seen so much corruption, so much disgusting behavior for too long from the millionaires and billionaires in this country. And it is a little bit rewarding. You, you, you do feel good about it, watching these people finally go down for this disgusting behavior.

Manila Chan:                       Yeah. Kind of a funny, weird remark coming from world renowned attorney Alan Dershowitz of all people to say this couldn’t happen. You, you gotta, you can’t help but laugh. Farron Cousins, always appreciate you spending some time with us. Thank you.