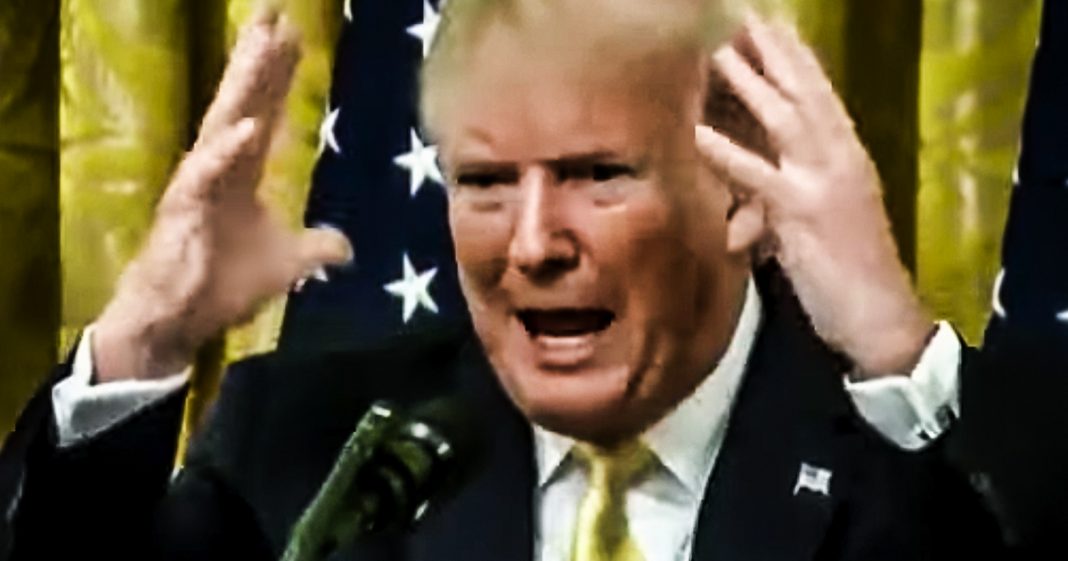 Donald Trump unleashed one of his most disgusting Twitter tirades to date on Sunday, telling Democratic Congresswomen Alexandria Ocasio-Cortez, Rashida Tlaib, Ilhan Omar, and Ayanna Pressley to “go back” where they came from. Republicans have remained mostly silent about this racially-charged and completely false attack, but there’s another reason Trump feels emboldened to engage in these kinds of tirades. Ring of Fire’s Farron Cousins discusses this.

So by now, I’m sure everybody is aware of the fact that Donald Trump engaged in a highly bigoted Twitter tirade on Sunday attacking a democratic congress. Women. He did not specifically name them, although it’s pretty obvious that he’s talking about the four women that Nancy Pelosi has been degrading for the last couple of weeks, which is representatives, Alexandria Ocasio-Cortez, Rashida Tlaib, Ayanna Pressley, and Ilhan Omar. Here are Donald Trump’s tweets.

“So interesting to see “Progressive” Democrat Congresswomen, who originally came from countries whose governments are a complete and total catastrophe, the worst, most corrupt and inept anywhere in the world (if they even have a functioning government at all), now loudly……”

“….and viciously telling the people of the United States, the greatest and most powerful Nation on earth, how our government is to be run. Why don’t they go back and help fix the totally broken and crime infested places from which they came. Then come back and show us how….”

“….it is done. These places need your help badly, you can’t leave fast enough. I’m sure that Nancy Pelosi would be very happy to quickly work out free travel arrangements!”

Three of the four of these women that Donald Trump is very obviously referring to were, were born in the United States, have lived there, a here for their entire lives. Uh, Ilhan Omar was born in Somalia, left during the civil war there, has been in the United States since she was nine years old. All of them are United States citizens. But I think we already know that, right? This, this isn’t new information. We understand where these women came from and what they’re doing and that they’re trying to make this country better. What Donald Trump is doing. Cause he spent the entire weekend doing this. This was the culmination of it that unfortunately as of this morning is still going on. He is trying to piggyback off of the alleged democratic infighting where Nancy Pelosi has been calling out the same for women. You know, kind of demeaning them, you know, downplaying their influence within the party. And Donald Trump thought, you know what? I can piggy back off this, demonize these women even further, Act like I’m sticking up for Nancy Pelosi, and may be helped my sagging approval rating, and this is the culmination of it.

Nancy Pelosi finally did come out and you know, talk about how horrible the statement was and say in no unclear terms that the president is a racist, AOC, Pressley, Omar, Tlaib. They all came out fired back at the president pointing out the fact that no, these, these horrible countries that he says they allegedly came from, those are actually the United States he’s talking about. But let’s focus on the big part of it, right? Okay. Go back to the country from which you came. Go back to your country. That is one of the most classic racist tropes here in the United States. You know, every video we see how many crazy man or woman ranting and raving in a Walmart because they heard somebody speak a different language, that is what they always say. Go back to your country. And it’s bad enough when you hear it from these bigoted idiots, you know, near the frozen food section. But it’s another, when the president of the United States says it. This is unacceptable. It’s inexcusable and it absolutely warrants congress coming out and at the very least censoring this president. But I’m going to take a little bit of a different turn here.

Nancy Pelosi could have put an end to this before it even began, and I’m not just talking about, you know, by, by having his impeachment hearings, Nancy Pelosi is the woman who started the attacks on these four progressive democratic members of Congress. Trump saw that, Trump like that because he knows these women are powerful and effective and that they’re going to be the future leaders of the party. And so because of Pelosi’s statements about these women, this is why Donald Trump did this. Pelosi shares a part of the blame and you can’t deny that to deny that would be to deny reality itself. Pelosi’s been going after these women for several weeks now. I mean, they had a meeting last week, closed door meeting where she told all the members to stop airing your beef on Twitter. You got a problem, you come to me, but don’t you dare tweet about it attacking other members.

Even though Pelosi had given that interview with Maureen Dowd of The New York Times where she specifically attacked those four women as she has repeatedly done since the 2018 election, she bears part of the blame. I’m not saying in any way at all that Pelosi herself is bigoted, but opening the door with her, you know, snide comments has allowed these incredibly racist attacks from the president to take place and now it is up to Nancy Pelosi to fix it. She has all the tools at her disposal. She has everything that she needs in her arsenal. She could 100% start something to get this man out of office. The only question is, does she have the courage? Does she care enough about her own party and this country to actually do it? I guess we’re going to have to wait and see.