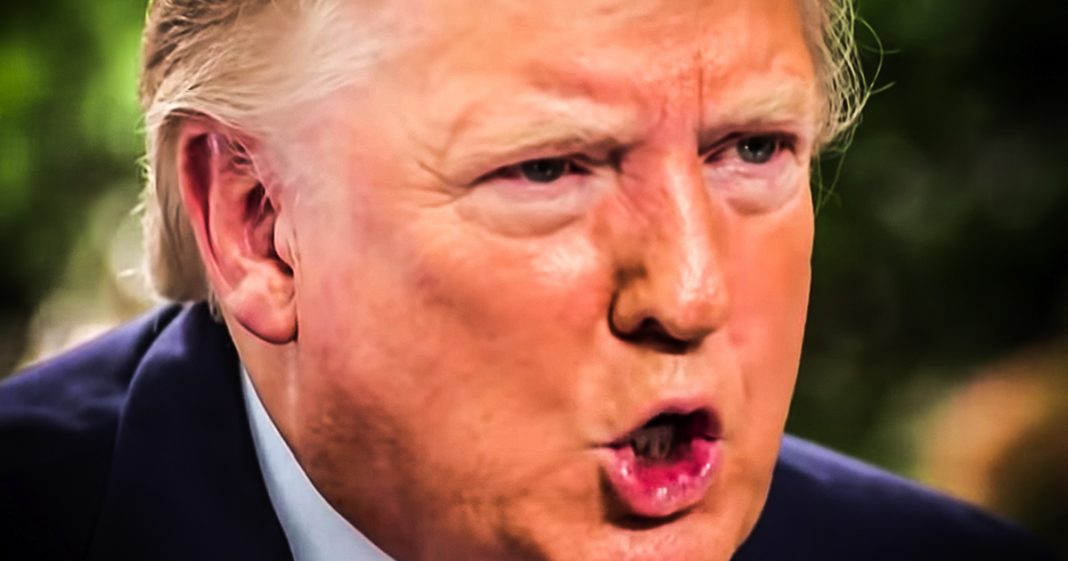 Media outlets had a very tough time getting comments from Republican staffers and even members of Congress following Donald Trump’s disgusting Twitter meltdown on Sunday. In many instances, staffers briskly walked away as reporters were attempting to ask them for a comment about the President’s statement. They don’t know how to react or what to do, and their silence is just as deafening as the President’s horrid comments. Ring of Fire’s Farron Cousins discusses this.

So the president has decided to drop any kind of facade of not being a bigot with his, a tweet on Sunday, telling four democratic congresswoman to go back to where they came from and for three out of four of them that where they came from is actually the United States, which according to Donald Trump’s tweet, has a completely dysfunctional government if they have any functioning government at all. But what’s interesting, what’s even more deafening than Donald Trump’s bigoted tweet is the silence coming from the Republican Party. And it’s not for a lack of trying on behalf of the media for the first 24 hours after these tweets came out, not a single republican came on record to denounce the president’s comments first 24 hours. Nobody, and I’m not just talking about members of Congress or senators, I’m also talking about staffers in general, according to reports on Sunday following Donald Trump’s ridiculous, insane tweet.

Media outlets immediately began reaching out to congressional staffers trying to say, Hey, can I get a, your comment? Can I get your bosses comment? Can I get any kind of comment whatsoever at all from any Republican? What do you have to say about the president’s comments? Silence, dead silence. These staffers and members of Congress, we’re figuratively running away from reporters because they didn’t know what to make of it. They didn’t know what to say. Do I come out and condemn it and risk the president’s wrath or do I sit idly by, let these racist attacks happen. Stay on the president’s good side, but have the public hate me. Oh, woe is me. What am I to do because I want to save my career. But at the same time, I think America’s headed down a pretty dark path right now and Donald Trump’s leading the way, but I guess my career is far more important than the future of the United States. That is what Republicans told us by not telling us anything at all. That’s what this is about.

You know, coming out the next day, 24 hours later, sitting on it saying, Whoa, I needed some time to digest this. I needed to really drill down and look at this. That’s not how it works. You could tell on the surface right there immediately based on the president’s own words, look at the entire Twitter thread. This was a racist attack. The same kind of racist, racist attack that we see from people in a Walmart folks. And the Republicans didn’t have enough courage to stand up and say, you know what?

This is wrong. This is disgusting. Get rid of it. Hell, even Geraldo Rivera actually came out and said, oh my God, Trump really bud, I’ve known you for a long time. This is bad. Don’t do this. You’re awful. And then Geraldo also said like, this isn’t the Trump I know cause I guess Geraldo didn’t hear Donald Trump make the comment about the legend Shit. Shithole countries in Africa sending people over a wasn’t aware of all the birther conspiracies. Donald Trump pushed about Barack Obama and you know, hasn’t paid attention to any of the kids in cages down there along our southern border. This is exactly the Donald Trump you’ve always known. He just didn’t do it publicly back then. And you know, another thing that’s interesting about this, you know Amarosa Manigault Newman, Donald Trump’s confidant, left the White House and in shame a year and a half ago or so, she claimed at one point she actually had seen the tape, might even possess the tape of Donald Trump using a racial slur and Amarosa.

I know you’re probably not watching this, but maybe somebody who’s watching this that knows you or could send this to you. Let me just plead with you right now. If you have got that Donald Trump racial slur tape now would probably be the best time to release it. He’s injured, he’s wounded, he’s on the floor. Why not go ahead and deliver that knockout punch right now by releasing that tape and showing the entire world that, no, you can’t misconstrue this. You can’t walk back to this comment. This is who this man is now. And it’s who he’s always been. And it’s not just about exposing the president at this point. It’s about watching all of these Republican staffers and members of Congress squirm when they realize they put all of their eggs. And that entirely, completely disgustingly deplorably racist basket.