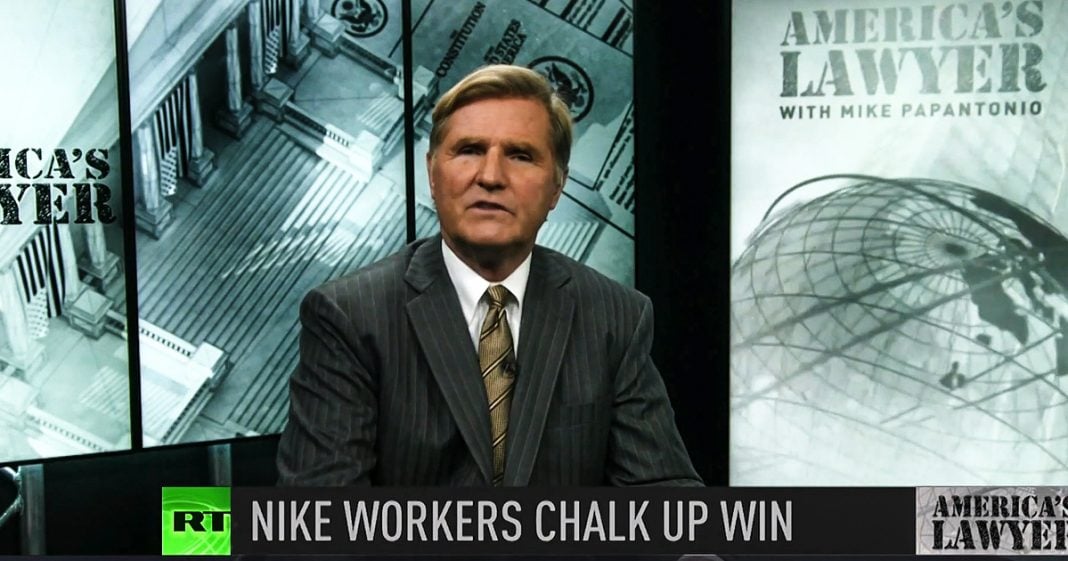 Via America’s Lawyer: Nike workers in California might finally get paid for the time that the company made them stay at work but not on the clock. Mike Papantonio explains more.

And finally tonight, some good news, Nike workers in California might finally get paid for the time that the company made them stay on, stay at work but not on the clock. In other words, they’re working off the clock for free. The Ninth Circuit Court of Appeals reversed a lower court summary judgment in favor of Nike and a class action lawsuit brought by the employees of Nike’s retail stores in California and they can once again move forward like they should have been to begin with.

In the original lawsuit, workers claim that Nike forced them to stay for an inspection once their shift had ended. The workers weren’t allowed to stay on the clock for their inspections, but they were also not permitted to leave the store until the inspection was over. The lower court said that since these wait times were usually about 10 minutes or more, they didn’t constitute any real losses for the plaintiffs.

The Ninth Circuit disagreed and the case is once again gonna move forward. Forcing employees to stay at work after they’ve clocked out is one of the most common forms of wage theft, and it goes on all the time. And though 10 minutes might not seem like a long time, just think how much time and wages these employees lost after working 30 to 40 shifts per month, that adds up to a serious amount of money that Nike will hopefully be repaying to these employees.

And that’s all for tonight. Find us on Facebook @facebook.com/rtamericaslawyer, or follow us on Twitter @americaslawyer. You can watch all RT America programs on Direct TV channel 321 and stream them live @youtube.com/rtamerica. I’m Mike Papantonio, and this is America’s Lawyer where ever week we’re going to tell you stories that corporate media is ordered not to tell because they’re afraid they’re going to insult somebody or they’re afraid that their advertisers won’t let them tell those stories. Have a great night.