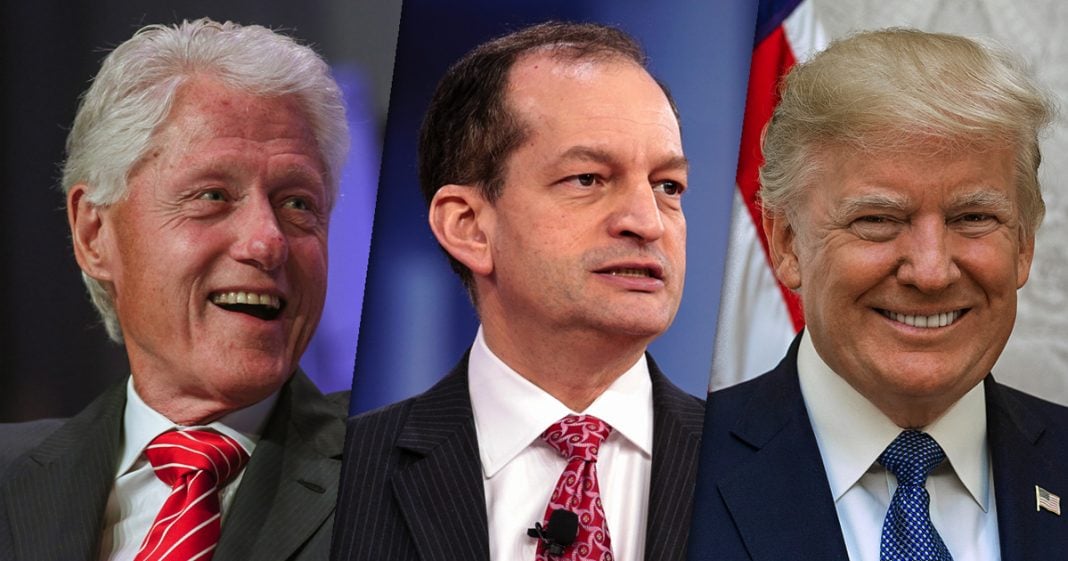 Via RT America: Federal prosecutors are asking anyone who’s flown on billionaire pedophile Jeffrey Epstein’s private jet, “the Lolita Express.” These include US Presidents Bill Clinton and Donald Trump and a slew celebrities and renowned media figures. Then Ring of Fire Radio and Trial Lawyer Magazine editor Farron Cousins shares his expertise.

Rick Sanchez:                       Let me simply share with you what we know from what is being reported about both of these men. Let’s start with Mr. Clinton. He says that he cut off contact with Mr. Epstein years ago and only flew on his plane four times. That’s his official response. However, that does not reconcile with the flight logs collected by both the Daily Beast and Gawker. It shows that Mr. Clinton was on 26 international flights and one domestic flight between Miami and New York. What gives?

Now like Mr. Clinton, Mr. Trump is also saying today that he cut off all ties with Mr. Epstein and even added today in an interview with Fox News that he wasn’t a fan of Mr. Epstein, but in fact when asked to vouch for Mr. Epstein and an article for New York magazine, and this is back in 2002 Mr. Trump said, and we quote, “I’ve known Jeff for 15 years. Terrific guy. He’s a lot of fun to be with. It is even said that he likes beautiful women as much as I do and many of them are on the younger side.”

Also in 2016 a woman going by the name Katie Johnson, sued Mr. Trump saying that he raped her at one of Mr. Epstein’s parties when she was only 13. The Daily Beast, by the way, reports that the woman later dropped the suit. So that’s the information, let’s be clear. Right now, only Epstein is officially charged and everyone else that’s being mentioned including the president’s deserves the full presumption of innocence in this case. Joining us now to discuss this story is Farron Cousins who co-host America’s Lawyer here on RT and also the popular show Ring of Fire.

Boy, it’s great to have you on Farron. Let’s start with, let’s start with this thing from the Justice Department today. That’s, I thought that was really weird that suddenly the Justice Department and the FBI would come out and tell anybody who has any information has ridin’ on the Lolita Express, has attended Epstein’s parties, has been to his homes in Manhattan, in Florida or in New Mexico. To contact them immediately and tell them what they know. What do you make of that?

Farron Cousins:                  I think right now we have a lot of law enforcement agencies in this country, including, you know, the Justice Department trying to play catch up. I mean, for a lot of these instances, especially the, with the plane and the flight logs, we already have those names. I mean, those are available. Those have been available through other lawsuits. They know who these people are, but they’ve got to come out and make it look like, hey, we’re, we’re, we’re actually doing something.

We’re, we’re participating. We’re helping you out. But it also shows that they understand this is an issue we’ve got to get ahead of. Mostly because this is probably going to end up being very bad for a lot of very powerful people here in the United States. And they want to make sure, okay, whatever we could do to stay ahead of it, we’re going to do it.

Rick Sanchez:                       Well, let me tell you why they haven’t contacted any of these people and by any of these people, I mean, two former presidents, Kevin Spacey, Chris Tucker, Ron Burkle, Larry Summers, Dershowitz. I could go on. The reason the story never moved beyond the original accusations in Miami is because there’s this guy named Alex Acosta who was a US attorney down there who basically quashed the entire investigation in what looks to me as a non-lawyer, like one of the dirtiest deals I’ve ever seen or heard of. Am I wrong?

Farron Cousins:                  Well, and that’s exactly, that’s exactly what a judge, just a few months ago actually said. They said that this plea deal that Acosta signed off on, Acosta negotiated, was basically, for a lack of a better word, illegal. But it wasn’t just the fact that Epstein got this super lenient prison sentence where it amounted to basically you have to stay in a bad hotel for 13 months. You can go as much as you want during the day. What it was was that they had the whole thing sealed.

Farron Cousins:                  The victims did not know that this plea deal existed. They didn’t know the terms of it. They thought justice had been served. They were the real victims, not just once, but twice because of Acosta’s action.

Rick Sanchez:                       Aside from Alex Acosta and of course Epstein himself, there are two very prominent players in all of this and both are either the president or a former president. We’re talking of course about Bill Clinton and Donald Trump. Let’s start with Bill Clinton. He came out, or his peeps came out yesterday and they said, look, the president only road four times, and has essentially distanced himself from Mr. Epstein. Road four times on the Lolita Express, when in fact the logs show that he rode 26 times on the Lolita Express. What do you make of this?

Farron Cousins:                  You know, I think it’s typical, just political speak, trying to distance yourself from a problem even when we have the receipts. I mean, I, I, I’ve gone through, I’ve worked with some of the lawyers who have worked on some of the civil suits. I’ve seen these flight logs. Okay. I know what is in them. I went through them. I’ve seen Bill Clinton’s name on there along with a, another person and then two unidentified women. This happened, this exists, these are already admitted in a court. Bill Clinton cannot sweet talk his way out of this like he has done so many times. He is involved and we know it.

Rick Sanchez:                       Let’s, let’s before we run out of time, since we talked about Bill Clinton, let’s talk about Mr. Trump who also today distanced himself saying, I never liked this guy, et cetera, et cetera. In fact, in an interview that he gave to the New Yorker, he said, “I’ve known Jeff for 15 years. Terrific guy. He’s a lot of fun to be with. It is even said that he likes beautiful women as much as I do and many of them are on the younger side.” That’s president Trump in 2003 vouching essentially, in this quote for Jeffrey Epstein. Mr. Trump was also sued in 2016 by a woman who said her name is Katie Johnson, saying he raped her at one of Epstein’s parties when she was only 13. The Daily Beast had since reported that the woman dropped the lawsuit. What do you make of this scenario for president Trump?

Farron Cousins:                  Well, I think it’s obvious just from his quote that obviously he’s seen Epstein with these younger women. The question is obviously are you able to prove that Trump was involved with any of it? Same with Clinton. Maybe these 26 trips on that plane were totally innocuous.

Rick Sanchez:                       Or Farron, or will we? Because you know what, you and I are talking here on television, global TV, no less, and I guarantee you that maybe as many as half of the people listening to us think we’re both full of crap, when we say that if they find out that any of these two men were really involved, they will tell us. You get my drift?

Farron Cousins:                  Yeah, I look, I think at this point there’s no more hiding anything with this. All of it’s got to come out. Epstein might try to make another plea deal. Whatever it is, we’re gonna find out who was involved and there’s going to be no denying it, not mistaking it, and, and hopefully just, God forbid, I don’t want to see any pictures from it. But if that’s what it takes to convince the public then go ahead and let them out.

Rick Sanchez:                       Wow. All right. This thing really can blow up. What a pleasure, Farron. Thanks so much for taking time to take us through this, enjoyed the conversation. Look forward to having you back.