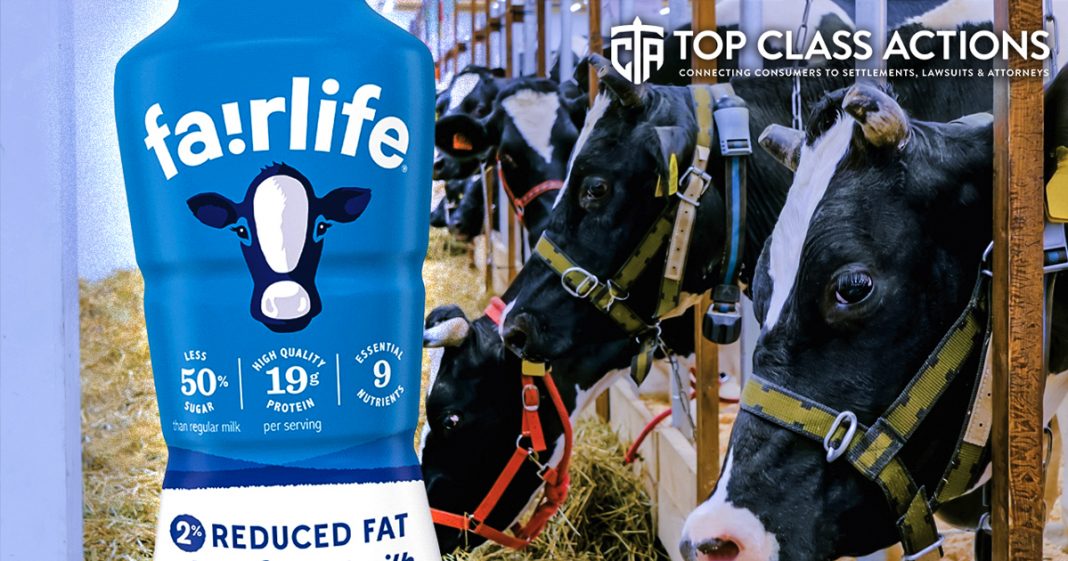 A class action lawsuit claims that Fairlife LLC, owners of Fair Oaks Farms, abuse their dairy cows, contrary to the advertisements on their milk products. The Fair Oaks Farms class action lawsuit was filed by Andrew Schwartz and Alice Vitiello who say they purchased the milk on multiple occasions at least in part because it is advertised as being produced in a way that is humane to animals. Ring of Fire’s Farron Cousins discusses this with Scott Hardy from Top Class Actions.

Farron Cousins:                  Part of modern marketing for any product that comes from animals is to tell people that don’t worry, our animals are treated humanely. They’re treated fairly. We do not abuse them in any way. This isn’t a factory farm. They’re free range. They get to do whatever they want, live a long, nice life before we take a product from them. But, consu… excuse me, corporations also know that this is a good way to get people to think that they’re doing things correctly. And unfortunately, as we’re starting to find out now, that is typically not always the case.

Joining me now to talk about what’s happening is Scott Hardy from Top Class Actions. And Scott, the issue specifically I’m referring to today is Fairlife the milk that says, hey, we treat our cows like royalty. No harm, no abuse, nothing whatsoever. These are great loved cows. That’s not what’s happening at all in any of these Fairlife dairy farms, is it?

Scott Hardy:                          Well, that’s what this class action alleges. And as you said, people will pay a premium. You know, we like milk. I like beef. But we don’t want to think about these animals getting abused. We want them to grow and when their time comes, make it as easy as possible on the animal. In the case of milk, we want to just picture, you know, granny milkin’ old Bessie there, no problem, no pain but, and we will pay extra for that. But in this case there was a group that came in and did, ran video. So Animal Recovery Mission went onto the Fairlife farms, onto Fair Oaks farm, which is the flagship farm for Fairlife and saw and recorded a lot of this abuse on the animals.

And they were talking about a video recording of the conduct, they witnessed calves being starved to death, beaten with steel bars and being burned with branding irons. And allegedly some cows who could no longer produce milk were shot and left to die, a process which sometimes took multiple hours and that is horrific and not at all what Fairlife supposedly stands for. And so you’ve got this farm with the, with their flagship farm, which is doing this and Fairlife as far as we’ve seen hasn’t come out with a statement.

Farron Cousins:                  Right. And Fairlife is specifically actively out there marketed as the humane alternative to just the generic, you know, white gallon of milk that you see sitting in the grocery store. Fairlife is supposed to be better. We know we’re not just hurting these cattle, you know, hundreds by the time into these cramped little stalls, hooking them up to the automatic milking machine. It is, as the name says, a fair life. We get milk from you and in exchange we treat you very well and give you everything you need.

But, you know, to add to the horrible list of things that you just described, this, the starving, the beating was steel bars. They, they also witnessed, they were throwing the calves. The, the workers would pick up a newborn calf, they would throw it, they would kick it, they would slap it. And this is all according to Animal Recovery Mission. I mean, this, this goes above and beyond just, oh, we have inhumane facilities to we’re straight up just abusing these animals for no other reason than we apparently can.

Farron Cousins:                  Absolutely. And, and this is the important part, you know, when, when this is your entire marketing campaign and you’re making consumers pay more money for a product that, you know, as you said, hopefully it’s going to ease their conscience. And, and hopefully the company was doing everything that they said they were. Treating these animals, you know, with the utmost care and with extraordinary care and comfort. But based on, you know, what we’re starting to see, it doesn’t appear that that is the case.

They market it as one thing behind closed doors and, you know, behind barn doors, an entirely new set of circumstances is playing out. That’s absolutely horrific for these animals. You know, these are, these are dairy cows. These are not cows that are being raised for slaughter. Right? You, you don’t have to kill a cow to get milk from it. There is no reason for any of this abuse, any inhumane treatment. These animals should live long, happy, and healthy lives being milked regularly as cattle have to be.

You know that’s the other side of that, just to point out, cattle have to be milked regularly. So this is just overall disgusting. The, this to me seems like individuals, maybe the farm knows about it, maybe they didn’t, but either way, the individuals doing this need to be removed. They should not be allowed around animals at any point anymore because there’s absolutely no, no need for this. This is just, you know, borderline sociopathic, psychotic, whatever you want to call it, behavior of individuals willing to do this to animals. I mean, that’s, that’s psychology talking right there.

Scott Hardy:                          Right. We, we should get a full report. The, hopefully the farm will, will clean up their practices. Fairlife should come out with a full audit of all of their farms and allow others to go out there and do their own audit, make sure that these cows are getting taken care of. Then if they want to call themselves fair life for cattle, they can use that term.

Farron Cousins:                  Absolutely. For more information about this particular issue, follow the link in the description of this video. Head on over to Top Class Actions and while you’re there, make sure you sign up for their weekly newsletter. Absolutely one of the best resources out there for consumers. Scott Hardy with Top Class Actions. Thank you very much for talking to me today.