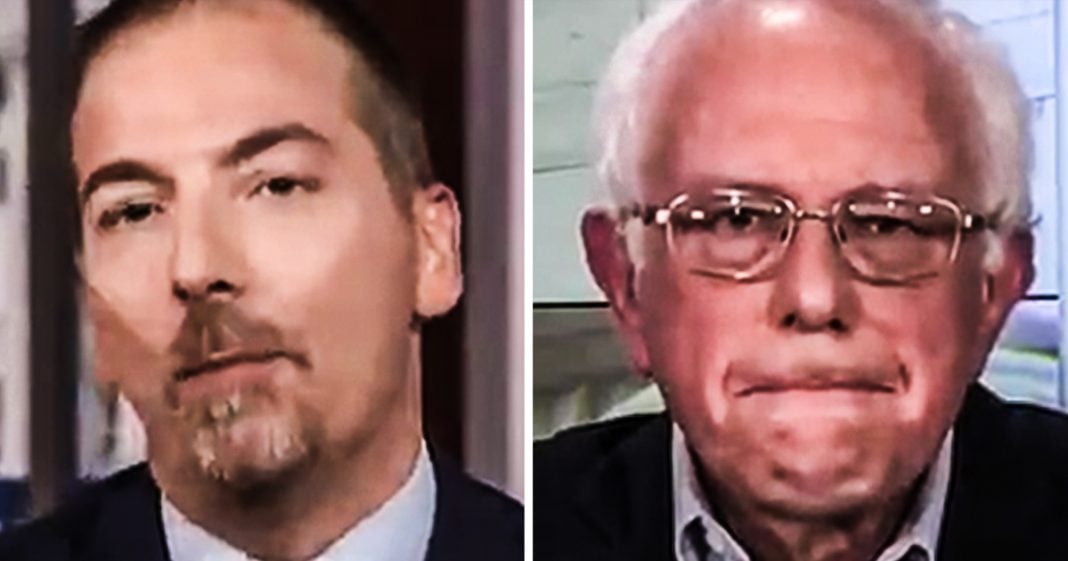 On Meet The Press this weekend, Chuck Todd asked Bernie Sanders if he should maybe change his campaign messaging and strategy because he’s doing what he did in 2016. The truth is that his message has been consistent for decades, something you can’t say of many other politicians. And that consistency is driving the corporate media crazy because it is finally resonating with the public. Ring of Fire’s Farron Cousins discusses this.

Farron Cousins:             You know, during the Democratic presidential debates a couple of weeks ago and this past weekend on Meet the Press on MSNBC News, Chuck Todd kind of made it clear that he’s not a huge fan of Bernie Sanders. And I know he tries to hide his disdain for Bernie, but it really comes through in a spectacular fashion. Just like on Sunday, again, when Chuck Todd decided to ask Bernie Sanders, hey, you haven’t changed your message from 2016. Don’t you think that’s going to hurt you? Bernie out a brilliant response. But here’s the clip I want you to see for yourself what chuck Todd asked Bernie Sanders and Bernie’s response here it is.

Chuck Todd:                  “Getting a lot of advice these days from a lot of friends, a, The New York Times story earlier this week was filled with a lot of it. I want to, uh, show you an excerpt, but deeper challenge confronting his aides and supporters after nearly four decades of running and usually winning iconoclastic campaigns on his own terms, he is deeply reluctant to change his approach. And you’ve had a lot of friendly, these are people, very much supporters of you who are saying it sounds too much like 2016. You have to rejigger things a little bit. Oh, be more personable. What, how are you accepting this advice?

Bernie Sanders:             Well, look, uh, two things. Uh, people say Bernie, you know your repetitious. You are talking about the rich getting Richard 40 million Lib people living in poverty. You are talking about so many old people who cannot afford them medicine and so forth. And so, you know what chuck, he has a promise I will make to you. When the poor get richer and the rich get poorer. When all of our people have health care is the right move. We are leading the world in the fight against climate change. You know what? I will change what I am saying. So it’s not me that’s being repetitious. It is. What is going on is society continues to favor the people who have the wealth and the power. While all over this country, people are working two or three jobs. And I understand that. I keep hammering away at that issue because I believe that in the wealthiest country in the history of the world, we don’t need 45 million people struggling with student debt. Kids can’t afford to go to college. Those are the issues I will continue to talk about and those are the issues we’ll win on.

Farron Cousins:             Now, what annoys me so much about this question from Chuck Todd, basically saying like, well you said these things in 2016 now you’re saying I’m again in 2019 what gives Bernie? Well, I’ll tell you what gives chuck is we still have the same problems in 2019 that we had in 2016 except we’re actually seeing them in a much larger scale and it wasn’t just 2016 by the way, Bernie Sanders was talking about this stuff in 2012 2008 2004 2000 all through the nineties and in fact all the way in the 80s Bernie Sanders was still talking about these problems that back then were a hell of a lot smaller than they are today. What this shows us is not that, oh, he doesn’t have a new message. It’s that he still cares about these problems and he’s still angry that we haven’t fixed them, but chuck Todd is being a good little corporate media toady and doing exactly what he’s supposed to do.

You know, try to corner that anti-establishment progressive candidate and make him look like a fool. Luckily Bernie did it the other way around. Then he made chuck Todd look like a fool because that is exactly what chuck Todd is now, but the corporate media is not going to let any Democrats skate by. Let’s be 100% on that because here’s the thing, Bernie’s been consistent since the 1980s and the media is out there telling us that this guy hasn’t even changed his message. Look how consistent he is. Isn’t that awful? Whereas if he hadn’t changed, just position on something, they’d be out there telling us, look at this guy. He’s a flip flopper. He’s all over the place. He doesn’t know where he stands. You can’t trust this guy. There’s no winning with the corporate media. They have to create some kind of controversy, some kind of conflict in order to keep it interesting so they can continue to get those advertising dollars, which is why we always see corporate media pushing us into new wars.

Wars make for great viewership and even better advertising dollars. They don’t have that much of a war right now. We still have conflicts going on. American troops are over there killing people and being killed themselves because this administration is so disgustingly inept, but it’s not always headline news. So they need something else. What’s headline news right now? The Democratic presidential race. So they’re out there trying to attack these candidates, trying to back them into a corner with these nonsensical questions about why are you consistent over the years? Instead of actually drilling down and talking about the issues and maybe somebody like Chuck Todd instead of asking why you’re still talking about it. Ask Him why he thinks we haven’t fixed it and what he’s going to do to fix it. Bernie has been warning about these issues since the 1980s at the very least, probably even earlier than that. So for Chuck Todd to say, Hey, why haven’t you changed your message? The better question is, hey, chuck, why have we still not fixed these problems and why aren’t you talking about that every time you’re on the air?