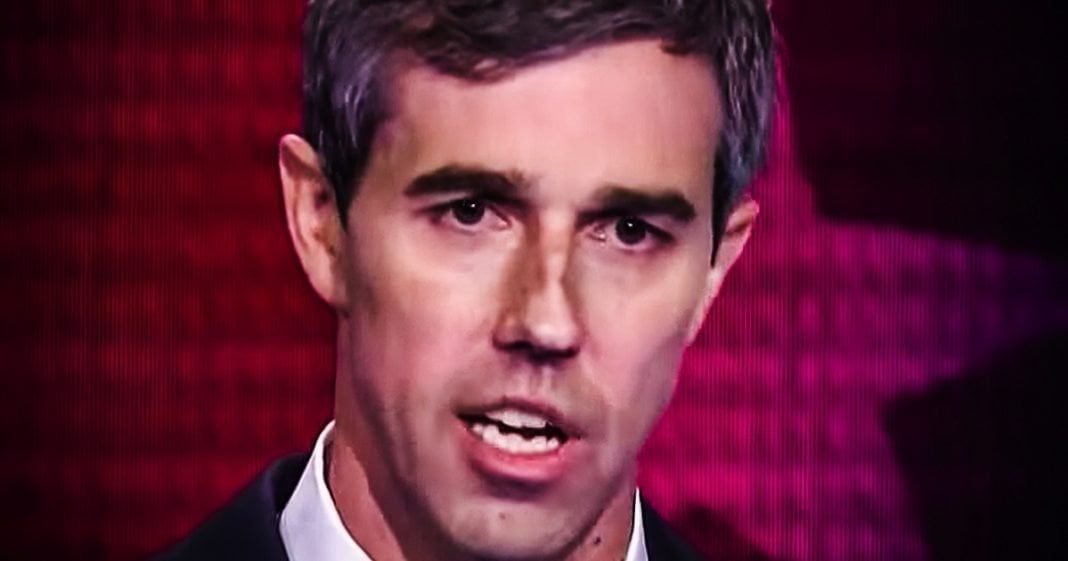 Beto O’Rourke’s fall from the spotlight has been quite the spectacle. And now that he’s continuously failing to poll anywhere near double digits in the Presidential race, he’s doing whatever he can to save his dying campaign. This weekend, O’Rourke came out and said that both he and his wife were descended from slave owners, a noble admission but awkward to say the least. What’s O’Rourke’s goal with this? Ring of Fire’s Farron Cousins discusses this.

Nothing has been more interesting to watch in the first six and a half months of this year than Beto O’Rourke’s fall from the spotlight. You know, again, as I’ve said many times, he teased this back and forth for quite a while. Is he going to throw his hat in the ring? Is he not? And when he decided to, we got a, you know, decent pull numbers, right? I mean I think you tapped out at 11, 12% and today better work would likely kill to be back up in that 10% 12% range because right now he’s hovering at about one or 2%. Some polls show him actually as high as 5% still way behind basically the top tier of the entire Democratic field at this point and falling. So Beto O’Rourke in a desperate attempt to gain more support on Sunday evening, uh, released the post that he wrote on medium, admitting that he recently found out that both he and his wife were the descendants of slave owners.

Now this is a noble admission. I admire this admission. I think it’s a good admission. I do think this is something he needed to do because God forbid if the opposition got ahold of this information and revealed it before Beto did that would have been awful for a campaign. And to be honest, I believe that is 100% why he chose to do it. Now again, I still agree with his decision to do this and I think this is something people need to understand and honestly I’m not going to hold that against better O’Rourke in any way cause he said, listen, I benefited from this system where human beings could own other human beings and that money and that privilege has been passed down generation to generation and that includes me. I am a beneficiary of it and we need to have a better, bigger discussion on this particular issue.

Also I agree with O’Rourke on that but then the whole post kind of turned into a campaign pitch cause he started going in to how if elected president, he is going to help the African American community with things like Medicare for all and we’re going to get reparations and we’re going to have criminal justice reform. And now you can understand the other reason why better our work decided to release this post. It had nothing with clearing his conscience. It had nothing to do with, you know, apologizing for the actions of his ancestors. It was all a big campaign pitch cause he understood that coming out and saying, I am descended from former slave owners. That’s going to capture headlines. People are going to start talking about that. So how do you make it a positive? Will you throw your little campaign pitch in there? And that’s what leaves a sour taste in people’s mouths with this cause.

A lot of people at the time were wondering why, why would he even bother to come out and say this? Why is this important? Why is this relevant? Well it is important than it is relevant, but the reason he chose to do it had less to do with the opposition releasing it before he could and everything to do with trying to pander to African American voters here in the United States. That’s what this pitch is. That’s what this is about. He sees his poll numbers tanking. He knows he’s not going to catch up with the other folks who are surging right now. He’s not going to be one of those people that makes the final cut. So he’s got to do something. He’s got to come out and say, listen, I’m great for the black community. Black voters. Please come to me. I’ve seen the poll numbers.

You’re leaving Joe Biden in swarms come to me because yes, my ancestors messed up, but I have a plan to make everything better. I don’t trust this, and at this point, don’t know how much I even trust Beto work as a person. But I will say this O’Rourke could have had a bright future in American politics. Instead, he made the completely selfish and delusional decision to run for president when he should be running for Senate against John Cornyn in the state of Texas. Could have unseated this highly unpopular Republican senator who’s been in office for far too long, could have honed his craft in the Senate, could’ve moved a little further to the left after years of pushing, but instead after failing to unseat Ted Cruz decides immediate laughter that you know what goes good with failure, a bid for presidency, and that campaign is tanking even faster than his won against Ted Cruz, which he had a shot at. He really did. But unfortunately, what he didn’t realize was that that nationwide support he was getting for running against Ted Cruz had less to do with Beto momentum and everything to do with the fact that everybody just really hates Ted Cruz.