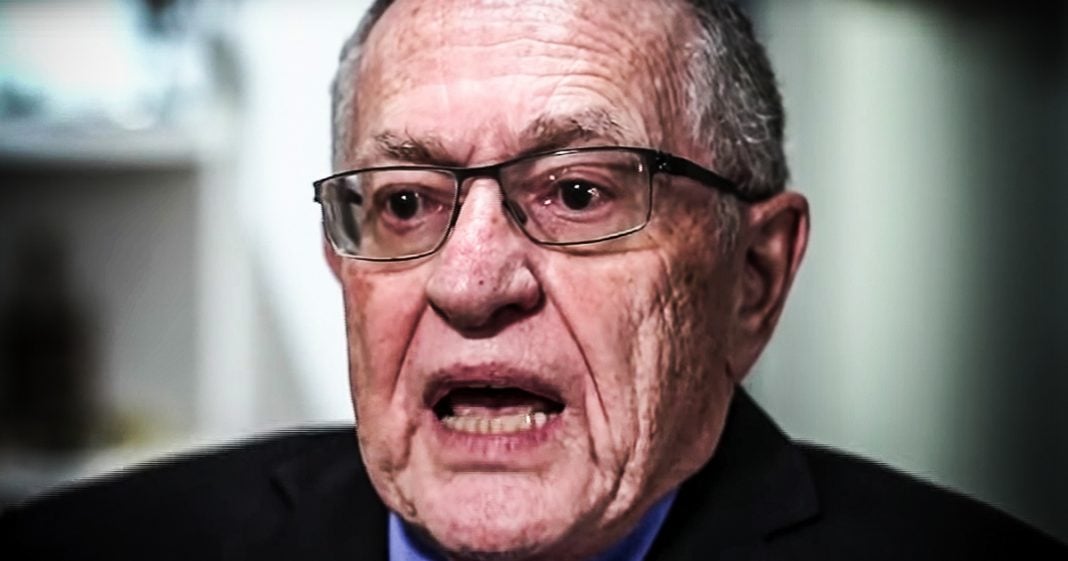 Jeffrey Epstein’s lawyer, Alan Dershowitz, is neck deep in the latest Epstein scandal as at least one woman has come forward to say that she had sex with Dershowitz several times while she was a minor. Dershowitz offered an excuse as to why he totally couldn’t have had sex with the woman, and it is allegedly because he kept his underwear on the entire time he was getting massages at Epstein’s place. Ring of Fire’s Farron Cousins explains how weak and pathetic this reasoning is.

Prominent Donald Trump defender and one of Jeffrey Epstein’s top lawyers and best buddies. Alan Dershowitz recently gave an interview to a TV station down in Miami where he was asked point blank about the allegations not only against Epstein and Prince Andrew, but the allegations against Dershowitz himself. Because let’s not forget the Dershowitz is more than just an attorney in this case, more than just a friend of Epstein. He has actually been accused by one of the women of repeatedly having sex with her while she was under age and working as essentially a sex slave for Jeffrey Epstein now Dershowitz several years ago in an interview that resurfaced recently said that yes, he absolutely got a massage while he was at one of Epstein’s little get together, but he never saw any underage girls there at all. Never. Not once, nope. But you see Jeff, uh, excuse me, Alan. Here’s the thing though, bud, that that part of the story, like that’s not even debatable anymore. We, we know the underage girls were there like that was already determined as part of the original plea deal. So saying that you never saw them or that they were never there. That’s an absolute lie and you know it. Well, that’s not even the dumbest thing he said in this recent interview. He said that there’s no way, no way at all. He could have had sex with anybody because he kept his underwear on during that massage.

I wish there was more to that folks, but, but there’s not that. That’s his entire legal defense here. Alan Dershowitz, Harvard law professor, famed attorney, and the best defense he can come up with as to why he did not have sex with any underage girls is because he kept his underwear on when he was getting a massage. Prove that I didn’t, I guess. Oh, I guess that would be pretty hard to prove, but nonetheless, if your best defense is no, I had my underwear on then, then you, you’ve already lost man. You you’ve really already lost and it actually, believe it or not, folks actually gets worse than that because before he even went into the, Oh, I had underwear on. You know what, I have to, I have to just go ahead and add this. Um, I don’t know if everybody watching this is familiar with how men’s underwear work.

At least, you know, nearly every pair of men’s underwear you can. Um, there’s a fly in it, right? So that when you go to the bathroom, you can just, you know, not have to pull your underwear down and you can get through like that. So, so Dershowitz, you can still have sex even when you have your underwear on bud. Okay, let’s just get that out of the way right now. So that’s a pretty crappy defense. I’m sorry, I even had to explain that really not at all what I set out to do when I came into the office today. But nonetheless, that’s how men’s underwear work. Uh, in case anybody didn’t know it. But again, as I said, it gets worse cause Dershowitz actually is now attacking the victims here. The women who were forced to work as sex slaves for Jeffrey Epstein, he attacked him or the one who accused him as a admitted prostitute and a serial liar. And claimed that the then teen was not victimized and in fact made her own decisions in life.

Wow. Blaming the victim now huh, Dershowitz. Oh yeah, that’s totally going to work out super well for you. When you finally get your day in court and you’re not the one up there making the arguments yourself, somebody has to make them for you because you become the accused, and let’s get one thing out of the way as well. Even if say a 1415 year old girl makes the decision to go out there and become a sex slave of her own free will, having sex with her would still be illegal just because somebody says, okay, I’ll do it. That doesn’t change statutory rape laws, buddy, you really are the dumbest smart lawyer I think that I have ever seen.