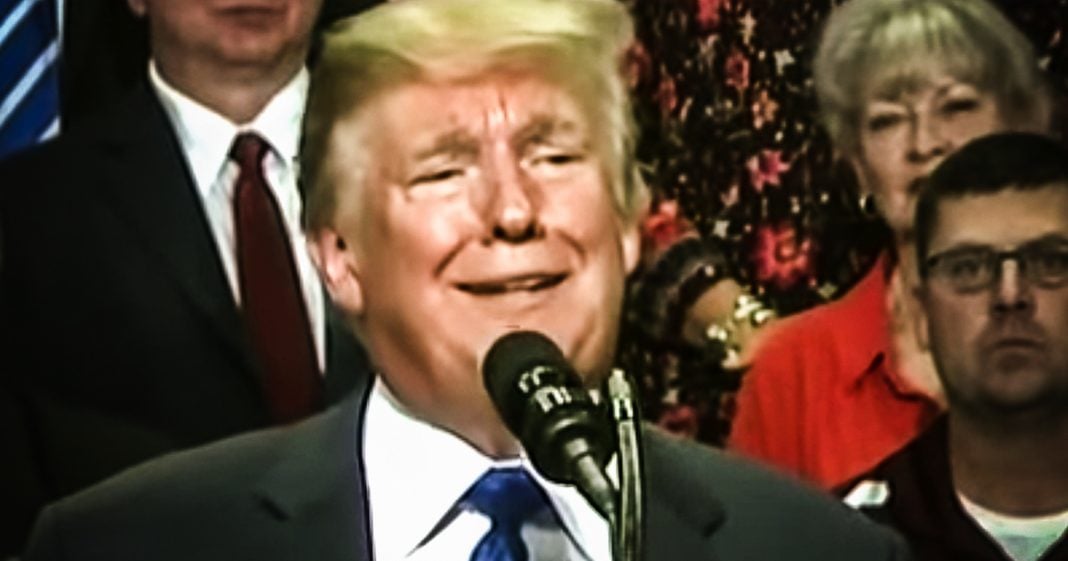 Donald Trump’s reelection advisers are starting to get very worried about the fact that the President’s support seems to be coming from just his base, and that base isn’t big enough to win in 2020. This helps explain why he gave his incoherent environmental speech earlier this week, and we can expect more of the President trying to appeal to people who don’t wear crusty MAGA hats all day. Ring of Fire’s Farron Cousins discusses this.

Earlier this week, Donald Trump gave a speech about the environmental accomplishments of his administration, which was basically nothing more than a series of lies and a more lies on top of that, but it didn’t seem out of place. Right? Like why is this guy who in the past referred to climate change as a hoax by the Chinese? Why is he giving a speech on the environment? We already know that he loves coal, that he wants more pipelines, that he doesn’t care about the environment whatsoever and that he’s lying about how clean our air and water are. So why even bother going out there and giving us this fraudulent speech on the environment? Well, it turns out there actually is a reason behind it. It has nothing to do with the environment, but it has everything to do with Donald Trump’s reelection chances in 2020 what we know right now is that his advisors are actually terrified about the fact that Donald Trump is losing massive amounts of support amongst suburban women.

And so his advisors thought maybe it would be a good idea for him to go out there, give this speech about the environment, give the impression that he cares about the environment because, and here’s the kicker. His base is not enough to win him reelection. Now that belief amongst his advisors right now actually runs contrary to what the president has told us. He has said quote, uh, when he was asked, you know, if he needed to expand his appeal beyond his base, he said, I think my base is so strong. I’m not sure that I have to do that. But right now his actual reelection advisers, the people running his campaigns understand poll numbers. They see their own polling data, which shows him losing suburban women and women in general. And they know that his, you know, White Male, no college education base. Uh, that’s not enough to get him reelection, not, not even close.

So they’re going to have to have him try to appeal to people. And now this actually presents an interesting case study in the United States. Now back in 2016 Donald Trump did run as a far right, populist, if you want to call it a populist, but he went out there talking to American workers at his hate filled rallies and in between horrible, I hate non-white people’s statements. He would appeal to the working class to a degree, and I’m not saying that economic anxiety is the reason he won. I think it was the other thing, the hatred of non-white folk. That is what propelled him, but all of it did. You know, kind of add up to a degree. He conned working class people. He did that. He also energize the worst of the worst that the alt right has the offer. But the working class is now looking at him saying, you ruined my life. You’ve ruined my livelihood. You promise me four to $9,000 a year in tax cuts and I’m actually paying more taxes than ever. You’re trade wars killed my farm. Your trade wars killed my livelihood, your trade war cost me my job.

Those people are saying, you know what, I’m out now. The alt writers, the base, they’re not going anywhere. They love the idea of a wall. They basically, you know, whenever they see those migrant kids down there locked in those cages, they love it. That’s like a sexual experience for them. They’re so excited for it. They’re not going anywhere but average, normal people who just simply got duped by this guy. They’re already out the door. And that’s why Trump’s advisors are panicking right now. Not just because obviously he could lose reelection, but he could embarrassingly lose the 2020 election if he doesn’t appeal to more people in this country. Again, we’re talking about a president who since day one has never broken a 50% approval rating. This man has never had a net positive approval.

And they know that is going to be hell for his reelection chances. So they’re doing what they can and we’re going to expect to see more of this. We’re going to see him out there talking about things we know he doesn’t know about things he doesn’t actually care about, and it’s all going to be coming from his advisors who are going to be out there saying, listen, you’re already losing Wisconsin and Ohio and Pennsylvania and Michigan and all of these other states that you can’t win without. You’re losing New Mexico. You might lose Arizona and at this point you keep this up. You might also lose Texas and Florida and you’re going to get, you know, be lucky to get a few dozen electoral college votes go out there and appeal to the people. But the best thing about Donald Trump attempting to appeal to the people is that he has no idea how to do it.

And now when he goes out there and says those lies after two and a half years in office, most people can identify the lies when he goes out there and tells them, you’re doing better than ever. Polls already show that. Most people agree that they’re not doing better than ever. They are paying more in taxes. Their wages have not gone up. They can look at their own paycheck and say, I have the receipt right here. I’m not doing better. And the more people do that, the worse and worse Donald Trump’s reelection chances begin to look. So hopefully that is what we see happening over the next year and a half. But we also cannot discount the fact that Donald Trump is a master con man, and there is no telling what kind of lies we are going to see as he gets more panicked and more desperate and more afraid about what’s going to happen in the 2020 election.