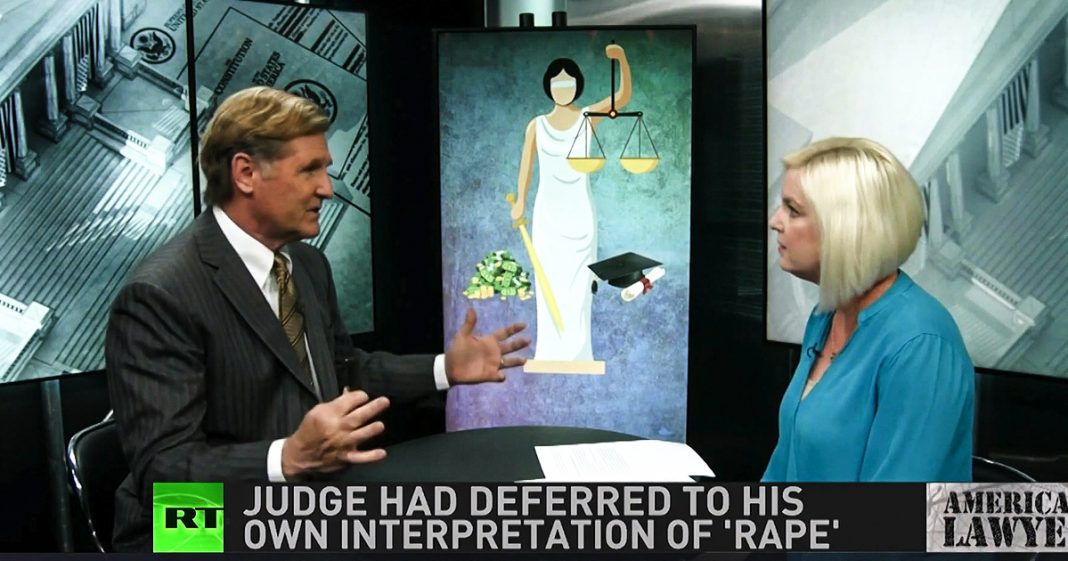 Via America’s Lawyer: Legal journalist Mollye Barrows joins Mike Papantonio to shine a spotlight on two New Jersey superior court judges that failed to deliver justice in cases involving rape of a minor. Just what led to their decisions not to try the perpetrators as adults?

Mike Papantonio:             A New Jersey appeals court overturned a 2018 decision which protected a 16 year old from being tried as an adult in a harrowing case of sexual assault. The boy had actually documented the incident and even shared footage among his social circle. Yet this privileged background appeared to influence the judge’s decision to grant him ridiculous leniency. Legal journalist Mollye Barrows joins us to break this down. Mollye, we’ve, we’ve done at least four stories like this over the last year and a half. Okay. Judge treats this little kid who with silver spoon in his mouth, born with a silver spoon in his mouth, born on third base and thinks he hit a triple. This kid is treated differently than another child that maybe doesn’t come from that background. He raped a little girl.

Mollye Barrows:                Judge James Troiano. He is a family court judge in New Jersey in Monmouth county. And basically the state appeals court went back and said, hey, it isn’t your call to decide arbitrarily what you think a rape is and to make all these essentially applying his own judgment in place of the prosecutor’s judgment. It wasn’t just this case three days after the state appeals court ruled that he should, he should have allowed prosecutors to pursue charges against this boy as an adult because that’s what he ruled against.

The prosecutors wanted this child to be charged, this 16 year old boy to be charged as an adult because basically he was facing sexual assault charges. Had he been along with invasion of privacy and a number of other criminal charges. But going back to what you said, the judge essentially, when it came up before the court, he, he, he said that this was not, it didn’t, it didn’t qualify because this kid was a good kid who came from a good family and he was going to a good school and likely was going to do really well in college, but it got worse.

Mike Papantonio:             Throw the little creep in prison just like everybody else who rapes people. It got worse than that didn’t it?

Mollye Barrows:                Yeah, so basically they were at a pajama theme party and the basement was off limits, but in the video he, you can clearly see according to the evidence in the, and what they say in the, in the, in the, in the case is that he brought this girl downstairs. She was clearly stumbling, slurring her words. There were other boys down there. He allowed them to, it’s almost embarrassing to say, but put Febreze on her bottom and they took her and slapping her butt. And then she was so out of it, he ends up raping her according to the law and taping it and then sent the video to several of his friends with a line that said, when you’re first time having sex is rape.

Mike Papantonio:             He’s a little character that belongs in prison with everybody else who rapes girls.

Mollye Barrows:                So this is an interesting one too. So three days after the New Jersey State appeals court said that he was wrong to make that call. They said something similar about judge Marcia Silva and it was her decision also not to pursue.

Mollye Barrows:                Is the judge’s name. And she ruled that a 16 year old, basically that was accused of raping a 12 year old girl, that that person should also not be tried as an adult because that the only real harm in her opinion that prosecutors said this 12 year old suffered was losing her virginity. That even if she had said no, but basically that’s what the state appeals court said, that that had nothing to do with it and it, and even if she had said no, which prosecutor said she did say no, it basically still would’ve been an alleged assault because of her age.

Mollye Barrows:                That the prosecution did not proven that it was emotionally painful.

Mike Papantonio:             Okay. Let’s go, let’s go to the heart of it. The heart of it is did this, that New Jersey has laws as a public policy, they have laws. And those laws are written according to what, what you would feel are the, the, the public is accepting of as a public policy. These judges say, no, we’re smarter than all that. We know more than all that. We know, for example, this little upper middle class…

Mike Papantonio:             White kid is gonna do, he’s got good parents. He goes from a good school and he’s gone. I can read the future and I can say, he’s not going to rape anybody else. Let me just tell you something. It doesn’t stop there. You know.

Mike Papantonio:             If I, if I’m making a prediction, we’re going to see problems with this kid somewhere else. It’s either gonna be rape of some type or there’s going to be an, it’s a repetitive thing. And for a judge to say, hey, you know, this is just a one time shot, we got to give him a break. It’s contrary to public policy. And that’s what, that’s what the appellate court said.

Mollye Barrows:                Right. That’s exactly what they said. That it wasn’t up to you to decide arbitrarily because your opinion differed with the prosecutor. That’s why you have prosecutors in this case. This was their recommendation. They had the evidence to back it up. And in both cases, both cases they basically said, you judges, you know, forced your will in a situation where it was not necessarily, it wasn’t the law and you didn’t follow the law and you need to follow the law.

Mike Papantonio:             And these judges just thought they were smarter than everybody else.

Mollye Barrows:                Well, at least the state appeals court upheld that. And, and, and I think in this time and place now that people are more apt to criticize decisions like this.

Mollye Barrows:                And there are five senators in fact, who are, are legislators who are calling for their removal from the bench.