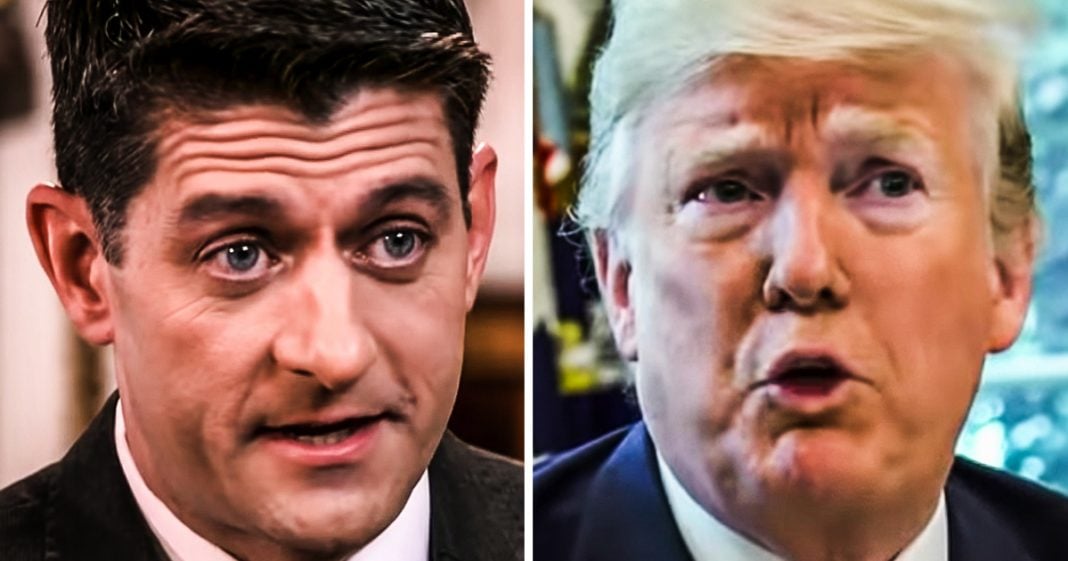 The author of the new book American Carnage, Tim Alberta, said that Paul Ryan viewed retirement as his “escape hatch” to get away from the craziness of Trump and the insanity he unleashed on Washington, D.C. Ryan’s spokespeople say that these are the words of the author, not of Ryan himself, but his abrupt retirement say otherwise. Ring of Fire’s Farron Cousins explains why Alberta’s assessment is likely true, as well as discussing the other factors that forced Ryan from office.

According to author Tim, Alberta’s new book, American carnage, Paul Ryan, the reason he just kind of suddenly decided to retire, even though we still in his youth, had probably a pretty bright, uh, political future ahead of him in the Republican Party, which wouldn’t have been good for America, but it would have been good for him just abruptly decided to retire. And the reason why according to Alberta is because that was his escape plan. That was his way to get away from Donald Trump and the utter insanity that he brought to Washington DC. Now, according to Paul Ryan spokespeople, those words are Tim Alberta’s. Those are not Paul Ryan’s words. Paul Ryan did not use those words. And the reason I keep saying it that way is because he made it clear to say, those are Tim Alberta’s words, not Paul Ryan’s words. So perhaps Tim, Alberta simply paraphrased and they’re trying to distance themselves from it without actually having to distance themselves from it because they could have just flat out come out and said, no, that wasn’t at all what happened.

They did of course say that we, he said he retired to spend more time with his family and that is exactly what he’s doing. But they didn’t outright deny that it was also his escape plan to get away from Donald Trump. There’s a bunch of other quotes from Paul Ryan in this book. These actually direct quotes and I want to read some because they really paint a picture of what this administration is like on the inside. Here’s one from Paul Ryan. I told myself I got to have a relationship with this guy to help him get his mind right because I’m telling you he didn’t know anything about government. I wanted to scold him all the time. That’s not surprising. Hey, we all knew, we even knew before the primaries were over that Donald Trump doesn’t have any clue how anything works in Washington DC and Paul Ryan, the so called “policy wonk,” you know the wonder kid, he knows everything about how government works and so of course he wanted to scold Donald Trump all the time cause he didn’t know how government worked really. Cause I think you probably should have scolded him after the whole Charlottesville. There’s bad people and good people on both sides. I think maybe that would have warranted a little more scolding than his not knowing how the executive branch functions. Maybe. I don’t know. Maybe that’s just me.

Also, according to Tim, Alberta, Paul Ryan broke into maniacal punch drunk laughter after then chief of staff, Reince Priebus called him early one day to ask about a Trump tweet accusing the Obama administration of tapping his phone during the election. So even Priebus and Paul Ryan thought that that was an insane comment for the president to make a comment. That by the way, has never been substantiated. And in fact, all intelligence agencies involved has said we did not try, uh, tap the Trump cam pain. Another a Paul Ryan quote. We helped him make much better decisions really, which were contrary to kind of what his knee jerk reaction was. Now I think he’s making some of these knee jerk reactions. Bottom line is this, Paul Ryan likely did retire partly because he wanted to get away from Donald Trump and what he was doing to the Republican Party. Paul Ryan also partly likely retired because he saw a very strong challenger coming up against him.

Randy Bryce, who could have easily beaten Paul Ryan. Ultimately, when Ryan decided to drop out, put another republican up there who did not have Paul Ryan’s baggage. Unfortunately, Randy Bryce did not win that race. He should have, I hope he runs for something again because he was phenomenal. Huge fan of his and I hope this, uh, is not the end of his political career, but Paul Ryan’s a coward, always has been, always will be. And we have not heard the last of Paul Ryan either because what Paul Ryan did by escaping DC right now and only being in it for two years long enough to get as little tax cuts for his wealthy donors, he gave himself the perfect opportunity to swoop back in to DC. Once Donald Trump is gone, once the Mitch McConnells are gone and your Inhoffs are gone, and hopefully your Lindsey Grahams are gone. Paul Ryan can come in and say, hey, let’s bring a little order back to the Republican Party. I’ve been away for a while. Have watched you devolve into whatever the hell it is you call yourself now let me Paul Ryan come along and fix it, and I can lead us into the future and I can run for president because I’m not tainted by the stink of Donald Trump like the rest of you people. And that I can promise you is the main reason Paul Ryan retired.