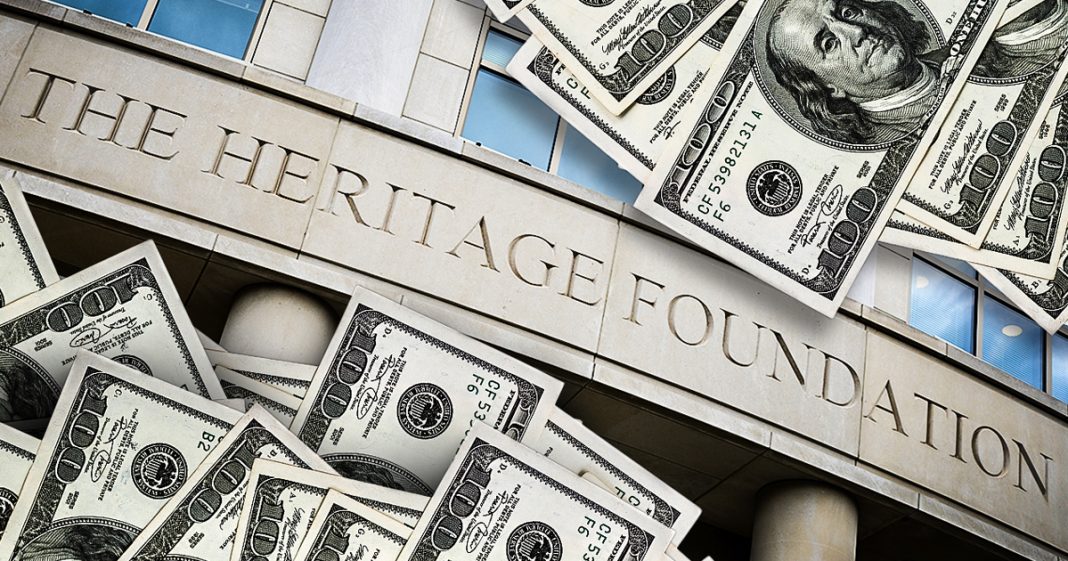 Conservatives with the right wing think tank The Heritage Foundation have published an op-ed in multiple newspapers that says that repealing the tax cuts for the wealthy will actually cost the middle class thousands of dollars in the next few years. They have conveniently not provided a SINGLE source for their conclusions, nor have they provided any data to show where they came up with their numbers. Ring of Fire’s Farron Cousins discusses this disgusting lie from Heritage.

The right wing Heritage Foundation is out there sounding the alarm bells about the United States economy. But unfortunately they’re not sounding the correct alarm bells. They’re not telling us that, you know, rising healthcare costs are destroying people, driving them into bankruptcy. They’re not saying that student loans are absolutely crippling people’s, uh, ability to buy homes and basically have a comfortable lifestyle. No, they’re warning us that if we repeal the 2017 Tax Cut and Jobs Act, that has only benefited the top 1%. If we repeal that as multiple different Democratic candidates have said they will do that will destroy the middle class in the United States. Now in this little op-ed that first appeared in the Chicago Tribune, you have two writers, Travis Nixon, Adam Michelle, I believe it’s pronounced, who wrote this lovely little article. And I loved doing it on several different websites cause it’s popped up in a couple of newspapers, including on the Heritage website itself.

And as it turns out, there is not a single link. There is not a single source. And more importantly, there is not a single group where they claim they got their numbers from and yet somehow Mr. Nixon, Mr. Michelle here have come to the conclusion pulling numbers straight out of their backside that if we repeal that tax cut, it is going to cost the average worker $26,900 over the next 10 years and the average family working class family, it’s going to cost them $45,700 over the next 10 years. That is a hell of a lot of money folks. But again, these two morons who wrote this article and if you want to claim you’re not a moron, please feel free to get in touch with me because I would love to sit down and talk to you about this. But you made this up, you made this up.

You have not provided any actual data. You didn’t even say where these numbers came from. You made it up because that’s what the Heritage Foundation does. The Heritage Foundation is funded by millionaires and billionaires. So these two morons who wrote this article, this op Ed that appeared in credible newspapers get paid the big bucks to just make stuff up. You know what an amazing Gig that must be, right? I mean, oh to be a right wing grifter you don’t have to worry about research. Hell, how many articles a day could you knock out if you didn’t have to research? I mean, I’ve done the whole contract writing thing. It takes a long time because you’ve got to have your facts in order. You got to have your sources. You got to make the bibliographies and all that stuff. But hell, if you’re just making up numbers like, Oh, if we repeal the tax cuts yet, it’s going to cost the average person 89 trillion. Why not fuck it. Publish it. Who Cares? But that’s not how the real world works.

You see Heritage, I know you’re funded by the billionaires and you got to protect their interest in the corporations and all that and you’d like to hide your funding by not revealing it or you know, only revealing what you get through these other foundations that also get money from other foundations and you’ve got to trace the source. But it all leads back to billionaires. I’ve done the math, I’ve followed those trails, I’ve written about them in the past, we know where it comes from. But here’s the thing, in order for your numbers to be correct that the average family is going to lose $45,000 over the next 10 years, that would mean that they would have to have gotten a tax out of $4,500 a piece, which hasn’t happened. And we do know that that hasn’t happened, which is also why we know that you pulled these numbers straight where the sun don’t shine.