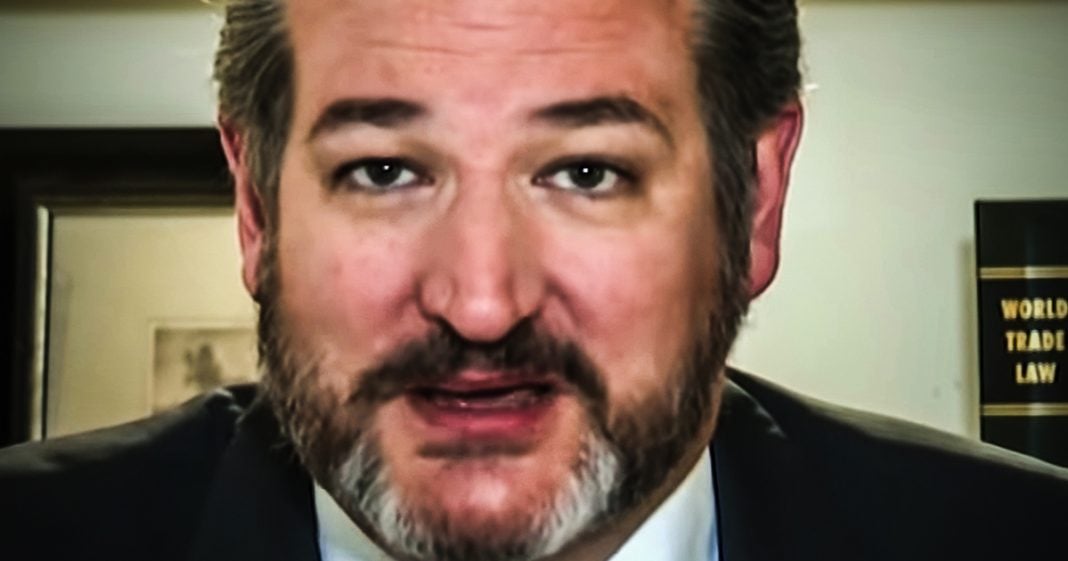 According to the new book American Carnage, Republican senator and failed Presidential candidate Ted Cruz was furious over the fact that Fox News was propping up Donald Trump during the 2016 Republican primaries. Cruz wanted that Fox News boost for himself and allegedly felt betrayed when the network decided to go all-in on Trump. Ring of Fire’s Farron Cousins explains why Cruz is right about Fox’s influence and why that should be concerning to all of us.

According to a new book by author Tim Alberta. The book is called American carnage on the front lines of the Republican civil war and the rise of president Trump. But according to this new book, Ted Cruz back in 2016 was furious about the fact that Fox News was propping up Donald Trump instead of propping up him Ted Cruz. And in fact he got so bad according to Tim Alberta, that after Ted Cruz decisively won the Republican primary in the state of Wisconsin, they go back on the bus, they turn on the TV to Fox News and what do they see? They see Sean Hannity come out and talk about, yeah, it was constant. Doesn’t really matter because Donald Trump has huge leads in the polls and the next few primaries he’s going to take this thing, Ted Cruz, his history, everybody get on that Donald Trump bandwagon and according to Alberta, Cruz jumps up and yells what the F, which according to Alberta was one of the only times he ever saw this man get that irate and use that kind of language.

Cause I guess Ted Cruz, as disgusting as he is still also kind of a laid back guy. But he was angry that Fox news was diminishing his little victory and propping up Donald Trump and he credits fox news with propelling Donald Trump to the White House. Going as far as to say in 2017 after Roger Ailes died that it was ales dying. Wish for Donald Trump to become the president, at least in Ted Cruz, his mind, it was his dying wish. But here’s the thing, ted Cruz is actually correct about this and, and I, it pains me to have that sentence come out of my mouth. I don’t like to say that Ted Cruz is right about this cause he’s usually not. But in this particular instance, Ted Cruz is 100% correct. Donald Trump, God, where he is today because of the aid of Fox News. This would not have happened without Fox. If they would have thrown their weight around behind Ted Cruz, he likely would’ve won the Republican nomination.

Same thing with Marco Rubio. Shame thing with pretty much anyone that was running in that overcrowded republican campaign. If Fox News gets behind you and they use their microphone to support you, you got it made in the shade and that should terrify a whole of us. We should not have one television network that is able to determine a major party’s candidate. But that is exactly what we have in Fox News. And Ted Cruz, according to Alberta, actually went a little further and he says, it’s not just Fox News, which again, he’s correct. Here’s what it says. Um, I didn’t anticipate that Trump would receive over $3 billion in free media. There’s no precedent for that in the history of the United States of America. That’s a quote from Ted Cruz, according to this book. And again, that’s correct. We had all of the major media outlets who would air every little Trump rally. Anytime Trump gave a speech, they’d cut away from their regularly scheduled program to air the Donald Trump show. Even while we had other Republican candidates running. Even during the, the, the general election.

Donald Trump was propelled to where he is mostly by Fox News, but with a little bit of help from all of the other media outlets. So that begs the question, what’s going to happen in 2020 is the media going to do the same thing? Or they’re going to engage in their typical media malpractice by giving Donald Trump all this free air time by letting him say these crazy statements without fact checking him, you know, calling a lie, something other than a lie to say, oh well he had this misstatement, call it a lie. Oh, he was misleading. Here, call it a lie. Well, I don’t think that’s factually accurate. Call it a lie, because if you let it go, or if you try to dance around calling it a lie, cause you don’t want to hurt anybody’s feelings, then you may as well go ahead and hand over the keys to the White House, to Donald Trump for another four years.