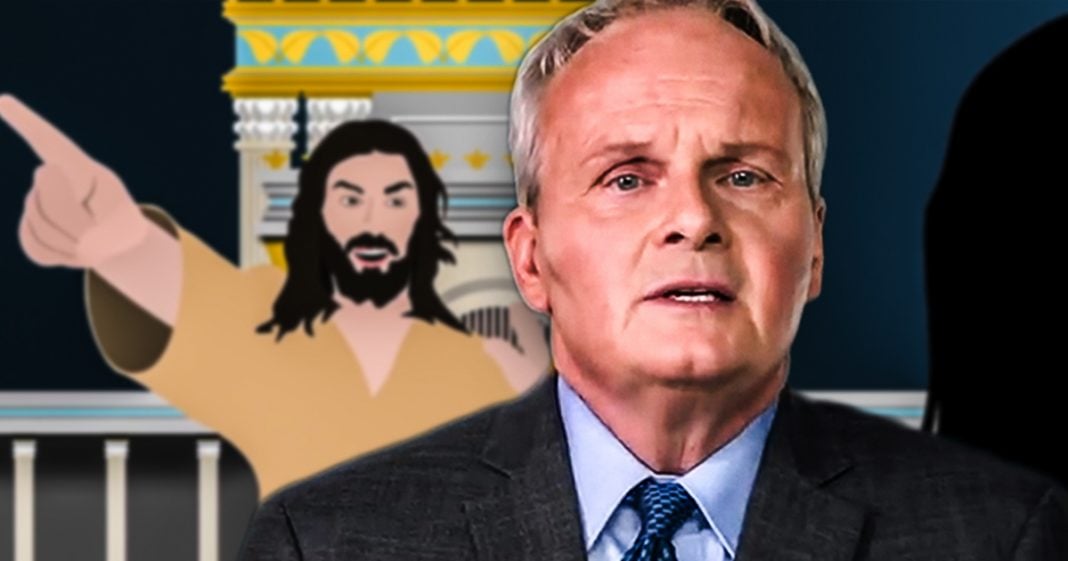 The folks over at PragerU are terrified of the word “socialism” and they’ve gone as far as to say that Jesus Christ himself was definitely not a socialist but instead was a full on free market capitalist. This is an absolutely ridiculous claim, even when they try to give us examples from the Bible with their own unique, reality-warping spin on them. Ring of Fire’s Farron Cousins discusses this.

Farron Cousins:             I grew up in a Catholic household, uh, for some years in my youth. I actually attended a catholic primary school, went to church every Sunday, had to go to Sunday school. Never a big fan of any of it, but I did learn a lot about religion. You know, we had to those as a class we had everyday right before science and aftermath didn’t really fit in between those two. But sure, what the hell of is my youth? It happened. But here’s the thing. Never at any of my religion studies, never in Sunday school that I had to attend up until I was 17 years old. Did I ever once hear any priest, nun, deacon, or Monsignor tell us that Jesus was a free market capitalist. And now in all fairness, I never heard them say Jesus was a socialist either. But I did hear countless teachings and readings and all kinds of stuff about how Jesus helped the less fortunate, how Jesus never charged a dime for any of it. That that was never mentioned. And those were the teachings that we learned. Jesus said, hey, take care of one another. Do whatever you have to help the less fortunate, but somehow along the way from my youth, which I’d like to think wasn’t that long ago, somehow Jesus turned from a, hey, help everybody. You can, if you call it socialism, who cares? He turned from that into a totally ein ran free market capitalist Libertarian, at least according to the folks at Prager U,

Prager U Video:             Nowhere in the New Testament as he advocate for the government to punish the rich or even to use tax money to help the poor, nor does he promote the ideas of state ownership of businesses or central planning of the economy. In Luke 12 Jesus is confronted by a man who wants him to redistribute wealth. Master, the man says to Jesus, tell my brother to divide the inheritance with me. Jesus replies, man, who made me a judge or divider over you, and then he rebukes the man for being envious of his sibling. How about Jesus’s parable of the talents? Talents were a form of money in Jesus’s Day, Amanda and trusted three of his workers with as well the two who invested the money and made a profit or praised, and the one who buried his share so he wouldn’t lose any of it was reprimanded. Sounds a lot more like an endorsement for capitalism than socialism, doesn’t it?

Prager U Video:             Yes. Jesus spoke of the difficulty for a rich man to enter heaven, but not because having money is evil. It’s not money. Rather it is the love of money. The New Testament tells us that leads to evil. Jesus was warning us not to put acquisition of money and material possessions above our spiritual and moral lives. Was Jesus promoting a socialist model when he kicked the money changers out of the temple in Jerusalem? Again, answer is no note the location where the incident occurred, it was in the holiest of places. God’s house. Jesus was not angry at buying and selling in and of themselves. He was angry that these things happened in a house of prayer. He never drove a money changer from a marketplace or from a bank. Jesus advises us to be of generous spirit, to show kindness, to assist the widow and the orphan. But he clearly means this to be our responsibility, not the government’s.

Farron Cousins:             Alright, so obviously we have Lawrence Reed who is the president of the Libertarian Foundation for economic education. Now, based on this video clip that I have seen, Mr. Reed should not be involved in any kind of organization that has the word education in the title. Now, he does, you know, make a couple of points here that we need to talk about. But first and foremost, uh, he had started the video by defining what socialism is and he referred to it as the concentration of power into the hands of government elites to achieve the following purposes, central planning of the economy and the radical redistribution of wealth. So based on that very narrow definition of socialism, he tries to tell us that Jesus Christ was in fact not a socialist at all. Instead, he doesn’t love capitalism, which technically wasn’t even a thing until several centuries after Jesus Christ was alleged to have lived. But sure, Jesus loved this thing from the future that he couldn’t have possibly known about, but yeah, sure, why not? You’re a libertarian, so nothing has to make sense. I’m pretty sure that’s in the tenets of libertarianism. We just say shit and hope it sticks. Jesus. According to Mr. Reed.

Was Mad at people who didn’t handle their money correctly and we saw there at the video, you’re the guy that was poor and he buried his like a little $1 while the other people who got more than him were able to make a ton of money and how he, yeah, making money is great, but no, not this guy who buried his money because he didn’t want to lose it.

That’s utter insanity and I know it’s difficult to, you know, these aren’t even real stories to begin with, but Mr. Reed is sitting there telling us a note. Jesus didn’t like people who save their money. He only liked people who went out there and invested it and they spent it and they made more money. What again, buddy? Look, I grew up with these books. I grew up in the church. I was an altar boy for way too many years. I heard this every week. I understood it every week I had to go up and give readings every week. What you’re saying isn’t true, you have somehow taken a Bible that is supposed to only teach people how to be better people, because let’s be honest, whether or not you believe in or not. Okay. You think it’s true or you think it’s false? That doesn’t matter. The point of the book itself, the point of the teachings of Jesus Christ is just be a good person. Be a good person. That’s it. Be a good person. It’s not about socialism versus free market. It’s about doing what you have to do to help other people. And you know what I guess, yeah, that would be considered a form of socialism, but actually it wouldn’t be the socialism that Mr redefined. It would be more like a democratic socialism saying that we as a group, as a country, as a government, whatever it happens to be, have an obligation to take care of the less fortunate and to help raise them up.

That’s what democratic socialism is about. That’s what Jesus Christ himself was about. If you’ve read the Bible, but Mr. Reed here wants to say no, Jesus was a libertarian. I’m sure if they had ein ran writings back then, Jesus would have sat there all day just reading those, marking up his own copies so we could carry around and proselytize with that. That isn’t what happened. Mr. Reed knows that. So what’s the reason for the video? The reason for the minute videos because he’s scared. You know, a lot of Libertarians and Republicans right now are scared of that big S-word, socialism. They don’t know what to make of it. They don’t like the fact that majority of young people actually view socialism more favorably than they do capitalism and they’ve got to get these people back and they think they’re going to get them back with some kind of free market. Jesus, this is also, let’s not forget a generation that is abandoning organized religion, not necessarily faith, but organized religion in any form. So trying to use free market. Jesus, the bring them over to your side. Probably one of the worst tactics imaginable, but again, dude’s, a libertarian, that’s what you get with these folks.