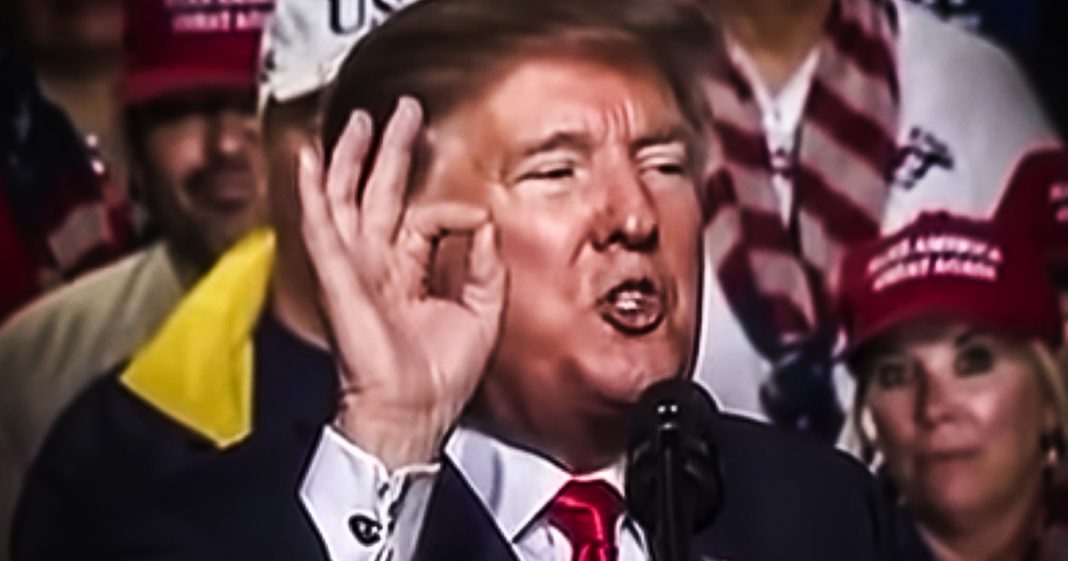 During a Thursday morning tweetstorm, Donald Trump made another comment about staying in office for a lot longer than just 2 terms. This is now the 6th time that he’s made these comments, and he’s either an excellent troll who knows how to work the crowd, or he’s really hoping that he can overstay his time in office. Ring of Fire’s Farron Cousins discusses these possibilities.

In an early morning tweetstorm on Thursday. Donald Trump for the sixth time in the past year and a half, hinted at the fact that he may actually stay in office longer than two terms. Here is a, the two part tweet that Donald Trump sent out. He was basically attacking, uh, all the Democrats running for president talking about his social media summit that he had on Thursday or at the time it was coming up later that day. But anyway, here’s a two part tweet. Here you go,

“…The Fake News is not as important, or as powerful, as Social Media. They have lost tremendous credibility since that day in November, 2016, that I came down the escalator with the person who was to become your future First Lady. When I ultimately leave office in six…”

“…years, or maybe 10 or 14 (just kidding), they will quickly go out of business for lack of credibility, or approval, from the public. That’s why they will all be Endorsing me at some point, one way or the other.”

All right. Again, this is the sixth time since I think March of last year that Donald Trump has joked about staying in office longer than ever. The first joke came when he was talking about China and they are later being declared president for life. And Donald Trump originally said, wow, what if we had something like that here? Wouldn’t that be great? And then he has routinely said, I should get two more years because of the Mueller years. Uh, maybe I could run again. He tweeted out that ad showing him possibly running for president of the year 90,000 showing that not only might he stay in office longer than he’s constitutionally allowed, but he would also live longer than biology says is even possible. Here’s the thing, he keeps telling us these are just jokes and I know a good part of him is only continuing to do it because he feels like it triggers the liberals, right?

Oh, we get so irate when he talks about staying in office longer than eight years. But here’s the facts, buddy. You got to worry about being an office in two years from now. Right? And there was a lot of things happening in your life, both publicly and privately, that could easily prevent you from being president following the 2020 presidential election. I’m not worried about you attempting to overstay your constitutionally limited time in office, but what I am worried about is your transition because even if you lose in 2020 or hell, even if you win in 2020 and then eventually do leave after a second term, you’re not going to leave peacefully. You’re not going to leave pleasantly, and you’re sure as hell not going to work with your predecessor in the manner that you’re supposed to. Part of the reason for that is because you still don’t even understand the job that you’re doing.

So how are we going to expect you to explain that job like Obama had to do for you to someone else? What are those conversations going to be like? That’s what I want to know. And more importantly, if you lose in 2020 are you even going to be willing to have those conversations? Because I’m betting you’re not. The truth is, I don’t think there’s any part of Donald Trump that wants to stay in office longer than eight years. Part of me believes that Donald Trump doesn’t want to be in office longer than four hears. Nothing would make the man happier than actually losing the election in 2020 because if he loses, then he’s got something to complain about for the rest of his life. He’s going to tell us it was stolen. Is he going to tell us it was rigged? Something happened. The Republicans weren’t with him. He gets all sorts of new enemies that he gets to whine about day in and day out till the end of his days, and nothing would make him happier than having all these enemies to attack on Twitter until he’s no longer able to function as a human being anymore.