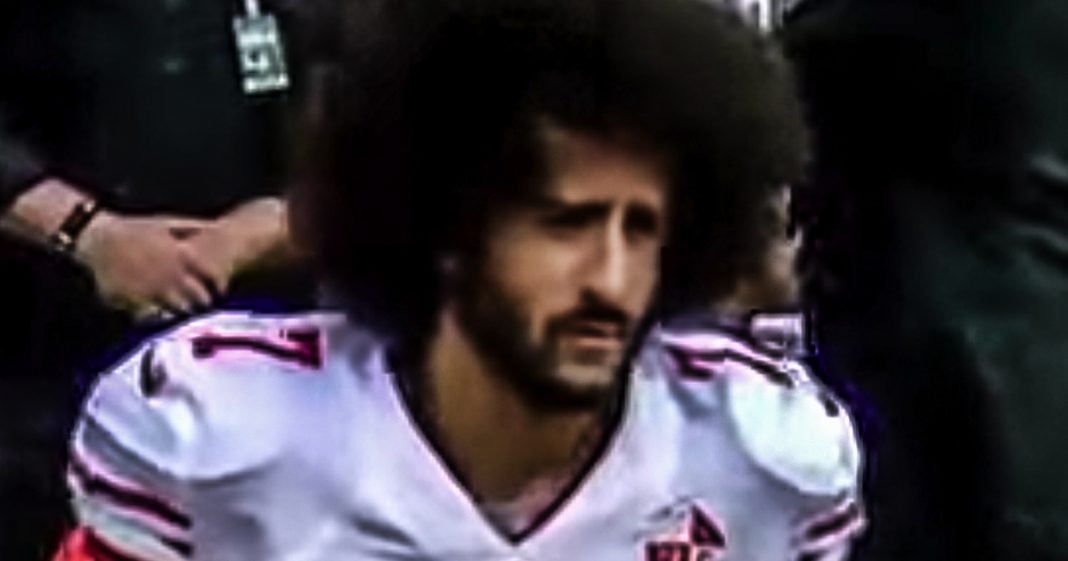 In a disturbing email blast sent out by the National Republican Congressional Committee, a picture of Colin Kaepernick is featured and the athlete’s skin is visibly darker than the original photo that was used. The NRCC was attempting to cast Kaepernick as anti-American and anti-flag, but instead they came across as absolute fear mongers who hate non-white people. Ring of Fire’s Farron Cousins discusses this.

The NRCC (National Republican Congressional Committee) released an ad via a fundraising email that appeared to show Colin Kaepernick except didn’t quite look like Colin Kaepernick usually looks, you look at the picture, you look at the contrast between the original photo they used or basically the one they used as the template and the one that was sent out. You can clearly see that yes, Colin Kaepernick’s skin is darker in the picture that the Republicans used. But the question, cause I know a lot of people have jumped on this and said, oh my God, they darkened his skin because it makes Colin Kaepernick look scarier. And yes, we do know studies have shown that the darker the skin of an individual, the more prejudice people get towards that individual, that that’s psychological studies that have happened. The question is, was this malicious? Was this the intent of the NRCC to darken his skin in order to get people to dislike him?

And the reason I say that’s the question, instead of just straight up saying, Yep, we know the NRCC did this for effect is because when you look at the way that picture is, it’s obviously from top to bottom, slightly more dull than the original picture. You know, they could have just put on some kind of filter, maybe just desaturated the image a little bit because when you look at the actual image sent out by the campaign in its original context, you have cabernet sitting right there, little bit darker, the whole picture, every part of it. Then you have Donald Trump vibrant, bright shining out at you, which is typical in any kind of ad where you’re trying to make a comparison. There is no intent of bigotry behind it in advertising. Uh, but again, we’re dealing with the NRCC with the Republican Party. So you have to question the motives and that’s, I guess, what this comes down to.

You know, a lot of our thumbnails that we actually use for our videos, we’ll desaturate. We’ll put filters on. We make the whole thing a little bit darker, a little more a flat finish instead of having the brights and all that. There’s no intent behind it other than it looks better on a computer screen. That could be what this is. But again, given the history of the Republican party, everything suddenly comes into question. We want to give them the benefit of the doubt that no, there was no intent behind this. But at the same time, we know that back in 2008 the uh, McCain campaign actually did intentionally darkened Obama skin in their ads to make them look blacker. So we know the Republicans have done this before possible. They did it here with Kaepernick. We also know that the biggest beef that Republicans happen have with Colin Kaepernick, has nothing to do with the flag, has nothing to do with the kneeling, has nothing to do with Nike. We all know what it’s really about, right? There were plenty of other people taking a knee. There’ve been plenty of other athletes speaking out against Donald Trump, but they don’t talk about all of them. They only talk about the ones who are different.

Right now U.S. Women’s soccer star, Rapinoe. Oh Man. Shapiro comes out and attacks her. Oh, It’s because she’s a lesbian that she’s getting all this attention. Kaepernick’s getting all the attention because he’s black. It’s the different nests. Of the person they’re going after. Okay, and that’s the key here. I personally do not believe it was the intent of whoever designed this ad to make Kaepernick look darker in order to make him look more sinister. You know, this isn’t like Time magazine doing that with the OJ mugshot where you could see all the other magazines had the same picture. He was a normal color versus Time magazine. Suddenly he’s eight shades darker cause they thought it made him look more menacing.

I don’t think that that’s what’s happening here, but given the history of the Republican Party, given their utter hatred of Colin Kaepernick, because of the color of his skin, we always have to look at these things and question them because we know that they’re not good faith actors over there on the Republican side. That’s why they get scrutiny for this and they deserve it. This photograph deserved to be dissected. It deserved to capture the headlines yesterday. And until that party cleans itself up and sheds that old racist skin, it’s been carrying around for 50, 60 years, they’re going to continue to be scrutinized to Hell and back because we know right now the underlying theme of everything that they’re doing.