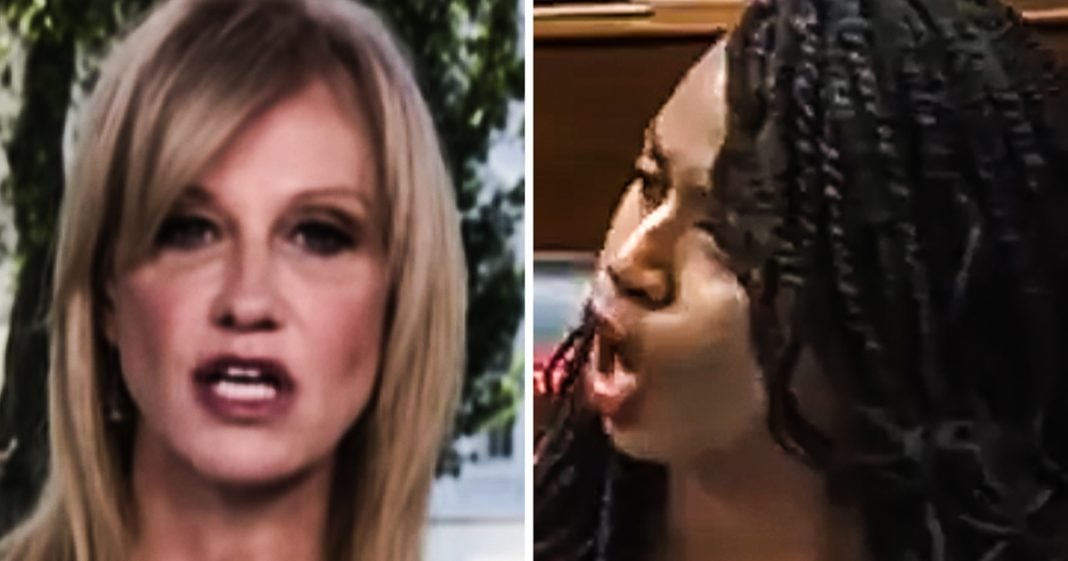 Kellyanne Conway appeared on Fox & Friends recently to whine about the fact that her 1st Amendment rights were being trampled by Congress, and Congresswoman Ayanna Pressley wasn’t going to allow that lie to spread any further. On the House floor, Pressley laid into an absent Kellyanne about her refusal to appear before Congress and the Office of Special Counsel to tell her side of the story, but she clearly had plenty of time to talk to Fox News. Ring of Fire’s Farron Cousins discusses this.

Farron Cousins:             Earlier this week we talked about the fact that a democratic congresswoman Ayanna Pressley clapped back on Twitter louder than I think I’ve ever seen anybody clap back in her attack on Kellyanne Conway, but that was just the beginning of it apparently because Ms. Pressley was not done letting Kellyanne Conway know how horrible she has been and fighting back against the lies of Kellyanne Conway, which is obviously the most important part. I’m going to show you a clip right now of Ayanna Pressley talking on the house floor about what kind of human being Kellyanne Conway truly is. But before we show the clip real quick, let me give a little bit of context. Kellyanne Conway was summoned to come appear before the House oversight committee last week, the White House a week prior to that had already said, we’re not letting her come. She’s not going to show up. We’re, we’re claiming immunity, executive privilege, whatever it is. She’s not going to come and talk to you about repeatedly violating the Hatch Act, which is what the a oversight committee wanted to talk about. So Kellyanne Conway goes on Fox and friends rather than showing up to Congress and whines about the fact that they were allegedly trying to muzzle her cover her mouth and duct tape, she says and stifle her free speech and Ayanna Pressley wasn’t having any of that nonsense. And here is what she had to say,

Ayanna Pressley:           As to our colleagues across the aisle who, uh, feel that this is a violation of freedom of speech. Instead of appearing before this committee, Ms. Conway appeared on Fox & Friends. She appeared on Fox & Friends. So she is consistent with a, with a consent, a disdain, and evading and obstructing a stonewalling over and over again by this administration. So how was it a violation of freedom of speech when she appeared on Fox and friends and said, quote, they want to put a big roll of masking tape over my mouth, but we sure as hell, hard or loud and clear on Fox & Friends. Okay. And yet, so this committee is not trying to silence Ms. Conaway. We believe the American people should hear from her. We have offered her a platform to explain herself and she did not show up. Back in March, 2018, OSC issued his first report detailing Ms. Conway’s Hatch Act violations. And during that investigation, OSC tried to engage Ms. Conway several times. And despite repeated attempts, Ms. Conway never responded to OSC after concluding that investigation. But before issuing the report to the president, OSC provide a Conway get another opportunity to respond to the report again. She never engaged with OSC and never provided a response to always sees report. Ms. Conway Ignores OSC, ignores the Hatch Act and now is ignoring the committee. This is completely disrespectful to us as a co-equal branch of government that she has not shown up here.

Farron Cousins:             Ayanna Pressley is very quickly becoming my favorite person in the United States that I am not related to. Um, I love the way she goes after Conway and uses her own words and actions against her. That is the best way to fight back against these people. Kellyanne Conway going on national television in front of millions of people to say that she’s having her speech stifled. That’s insane, and Congresswoman Pressley correctly pointed that out. How can you be being silenced when you have an audience of millions any time you want to have it? The fact of the matter is that Kellyanne Conway, according to the office of special counsel, broke the law twice. Kellyanne Conway was asked repeatedly by the office of special counsel, can you please come talk to us about this or we can figure out what this is about.

At Kellyanne Conway said, no. Congress said, Kellyanne Conway, you need to come and talk to us so we can get to the bottom of this and figure this all out. After all, they recommended you be terminated from the White House. I think that demands a little bit of oversight here. How about you come give us your side of the story and Kellyanne Conway and the White House said no. Kellyanne Conway was given multiple different opportunities. As Congresswoman Pressley pointed out to tell her side of the story, to tell it to the lawmakers to tell it to the investigators, and she willfully declined it. Instead choosing to go on Fox News and whine about it. Conway 100% could have cleared this up or given us plenty of reason to fire her, which is what would’ve happened. But she chose not to because she knows that that’s what would have happened if she thought she had any chance of clearing her name or explaining this away. She would’ve been the first one to march into congress and say, everybody sit down. And I got something to say, but she didn’t do that because she knows that she is wrong. She knows that she’s not going to stop on until there’s some kind of forceful removal of her from office, like some kind of bad fungus. She’s just going to keep growing in there.