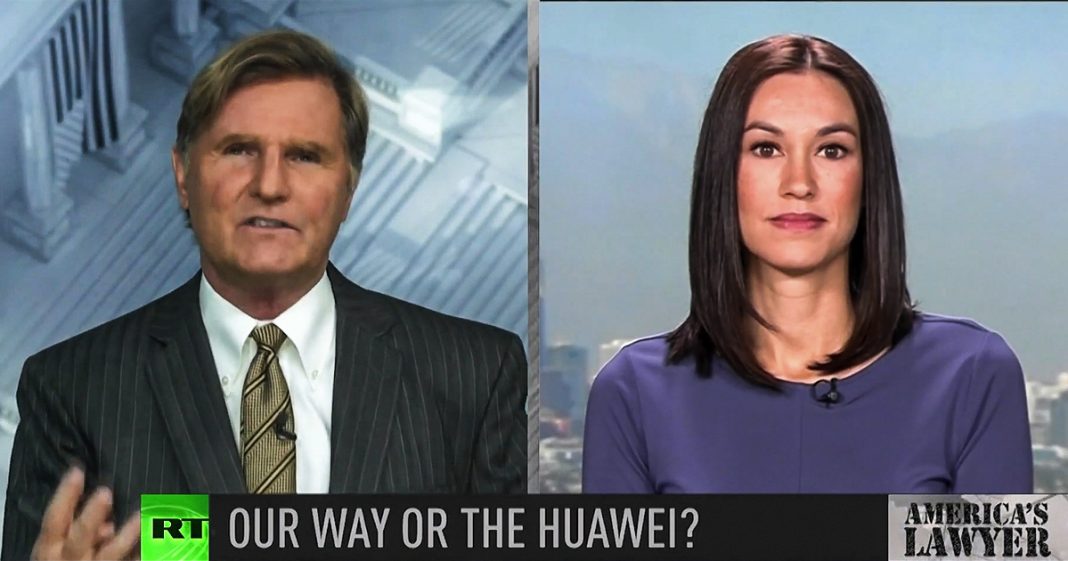 Via America’s Lawyer: RT correspondent Brigida Santos joins Mike Papantonio to talk shop about Huawei and its lawsuit against the U.S. government, which alleges the federal blacklisting of the Chinese telecomm giant is unjustified, even unconstitutional.

Mike Papantonio:             A foreign telecom giant is at the center of the US trade war with China and they’re challenging the American government in federal court. The Chinese firm Huawei accuses the US of illegally blacklisting its products, but the Trump administration, well they’re pushing back. RTs Brigida Santos joins me now with more on this story. Brigida, you’ve been looking at this. Why, why does, Huawei believe that US is acting illegally in banning the firm’s products? We have the right to do that in any kind of tariff, any type of tariff war that we seem to be squarely involved with. And what’s going on here?

Brigida Santos:                   Yeah. Well, Huawei officials claim the US unconstitutionally banned the company as a security threat by unfairly singling it out without trial. And this of course stems from the 2019 National Defense Authorization Act, which bans federal agencies from working with Huawei and companies that use Huawei equipment. In regards to the lawsuit, the firm’s rotating chairman says, “Congress has repeatedly failed to produce any evidence to support it’s restrictions on Huawei products. We are compelled to take this legal action as a proper and last resort.”

Now the US has long claimed that Huawei equipment, deliberately contained security holes that the Chinese government could exploit to spy on American communications and disruption networks. Huawei, however says that it’s the US that’s doing the spying and National Security Agency documents that were leaked by Edward Snowden previously revealed that the NSA had in fact hacked into Huawei systems and stole it’s source code and emails. Now this is something that governments do to each other. Huawei says the US ban is politically motivated, anti-competitive, and unsubstantiated.

Mike Papantonio:             Well, you know, Brigida the NSA has almost zero credibility right now. I mean, go take it all the way back to the Iraq war. They lied about weapons of mass destruction. They’ve lied at the conflict in Syria. The question was, was that, was that all, you know, a put up. They’ve got credibility problems that they have a hard time overcoming. And so the question under, the question is going to be asked, what real evidence is there to prove that Huawei is spying on American, on American companies or in America in any kind of way? I mean, look at what they did with Russia. I mean, you know, NSA comes out and says that Russia, you know, blew the election. You know, and we then we find out that that was nonsense. So where does the NSA really prove that anything’s going on here? What’s your take?

Brigida Santos:                   Well, it looked into the allegations and found a mixed results as far as the credibility. Now even the foreign intelligence agencies that belong to the world’s most comprehensive spying agreement, known as Five Eyes, can’t seem to agree about Huawei. Now they do share concerns that the company’s products may contain back door security flaws that could make espionage possible. But Britain has inspected Huawei code and hardware for years at a lab run by it’s electronic spying agency GCHQ. And so far it’s found no evidence of back doors. However, it has found holes in the code and weak security.

In 2011 and 2012 a back door was found by the Italian firm Vodafone in it’s Huawei products. But the issue was fixed right away. No one has yet proven that Huawei maliciously or deliberately makes products that are not secure and the firm says it would be commercial suicide to knowingly do so. And it’s also important to note that weak security and imperfect code is not something that’s specific to Huawei. Companies that are in the news all over the world every single day for getting hacked to due to their security flaws.

Mike Papantonio:             Well, I mean you’re seeing the same thing with Facebook over in Europe. You’re seeing it with Google. I mean, basically they’re always, they’re saying Amazon has a back door to your house. To where you’re in your house talking about x, y or z and Amazon knows what you’re talking about. Look, Chinese laws require local companies to hand over network data to the Chinese government if asked. Has, has, Huawei done that, has that already taken place?

Brigida Santos:                   Huawei claims that it has not and that it would never turn over its data to the Chinese government. While laws requiring it to do so are troubling, they’re not unusual. I mean, you know, here in the US American telecom companies, including AT&T and Verizon have been asked to hand over consumers private data to the National Security Agency, and of course they’ve complied with the US government’s mass surveillance program. Huawei CEO, however, claims that Apple will be it’s role model in protecting consumers privacy and it vows to follow Apple’s lead and apple famously refused FBI orders to build a back door into its iPhones.

Mike Papantonio:             Brigida, thank you for joining me. This is a smart move by China because I think when NSA is pushed, they’re not going to be able to deliver. Thanks for joining me.