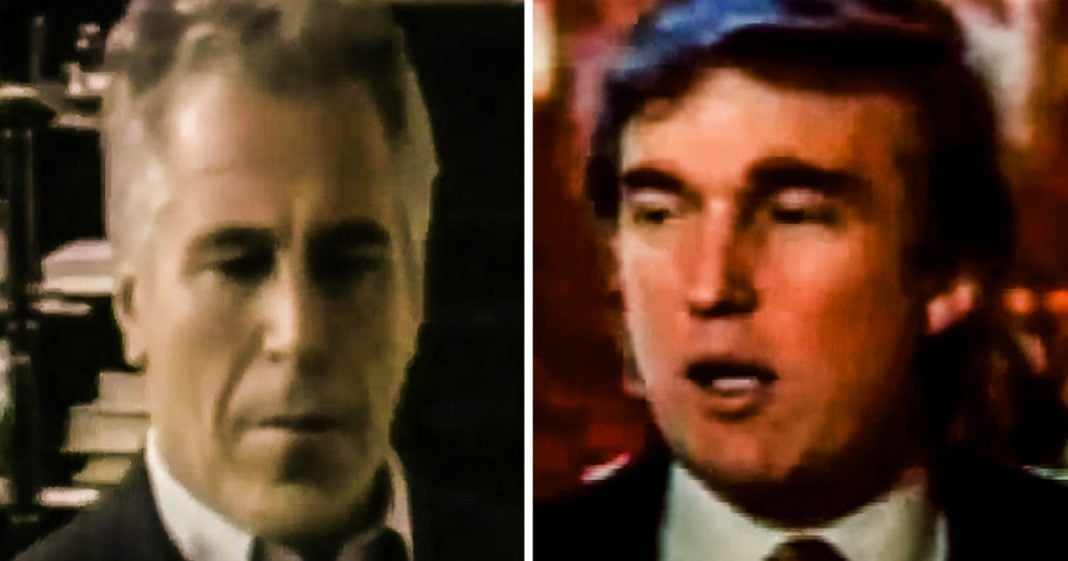 Donald Trump is doing his best to distance himself from Jeffrey Epstein, but a new report by The New York Times has revealed that, in the 90’s, Donald and Epstein were the sole attendees at a party where 28 women were flown in. Just those two creepy men and 28 young women. While no misconduct has been alleged, given the history of both of these men it seems implausible that they simply played party games and went home. Ring of Fire’s Farron Cousins discusses this.

In the last few days, ever since Jeffrey Epstein was arrested in New York, you’ve seen these high profile, current and former US presidents try to distance themselves from him. Donald Trump says, oh, I had a falling out with them years ago. You know, I haven’t talked to them in well over a decade. You know, I didn’t know Alex Acosta done all this. He just applied for a job and gave, told me, look good. Bill Clinton’s out there telling us, I only wrote on his jet four times. You actually wrote in his jet 26 times, right? You know what’s a few numbers here and there, but Donald Trump really is the one who should be worried. I know Clinton’s got some, you know, pretty questionable things and hopefully if something happened, we’ll find out about it. If he did something, we need to know about it and that needs to be the end. But Trump, Trump’s the one who’s being a little more dodgy about everything. He says that, hey, everybody in Palm Beach Knew Jeff Epstein. That doesn’t mean I was good friends with him. And at the same time Donald Trump is tweeting out that nonsense. The New York Times breaks a story about how a Florida business owner back in 1992 actually threw a party, was involved in the planning of a party for Trump and Jeff Epstein. It’s supposed to be a big party. They were flying in 28 girls to be at this party. Some business man shows up there. He says, who else is coming? And it’s just Donald Trump, Jeff Epstein, and 28 girls here. I’m going to read you a couple paragraphs out of this New York Times piece because it is just absolutely phenomenal.

“It was supposed to be an exclusive party at Mar-a-Lago, Donald J. Trump’s members-only club in Palm Beach, Fla. But other than the two dozen or so women flown in to provide the entertainment, the only guests were Mr. Trump and Jeffrey Epstein.” “The year was 1992 and the event was a “calendar girl” competition, something that George Houraney, a Florida-based businessman who ran American Dream Enterprise, had organized at Mr. Trump’s request.” “I arranged to have some contestants fly in,” Mr. Houraney recalled in an interview on Monday. “At the very first party, I said, ‘Who’s coming tonight? I have 28 girls coming.’ It was him and Epstein.”

As Mr Houraney and I says. 28 girls. As entertainment, whatever that means. And just Donald Trump and Jeffrey Epstein. Now, at no point does this Florida business owner who was asked to, uh, arrange this little soiree, say that either Trump or Epstein engaged in any kind of misconduct. There are no allegations from this particular party, right? But let’s be honest, let’s look at the history of both of these men. We know who they are. We know what they’ve done. The documents had been filed in court for both of them, really. But we know what kind of human beings they are. And at this point, it is almost implausible to believe that there was not some, uh, inappropriate shenanigans happening at this party with two predators in 28 young girls who thought they were going there for a calendar girl competition. This story is going to get a lot uglier for Donald Trump. And His story’s probably going to be a lot uglier than the Bill Clinton story.

Not that that undermines Clinton’s involvement with Epstein and Hillary’s involvement with the alleged Madame Maxwell who Epstein had hired. This is bad for a lot of very powerful people on both sides of the aisle and as I’ve said before, and I’m sure I’m going to have to say it a hundred more times to take them all down, even if they claim to be on the same side as me. If they’re engaged in an activity like this, you’re no ally, you’re just as bad as Epstein himself and we are going to find out more and this isn’t going to end well for anyone involved in it. Especially if more stories like this come out about Donald Trump, suddenly his denials are a lot less plausible. Right? Oh, I only knew him and you know, a certain context of I lived in the same city as him. Now we’re getting more things on record. We’re finding out more and once some of that evidence from Epstein’s a raid this past weekend comes out, I guarantee you your denials are going to look silly and just a few weeks, maybe a few months.