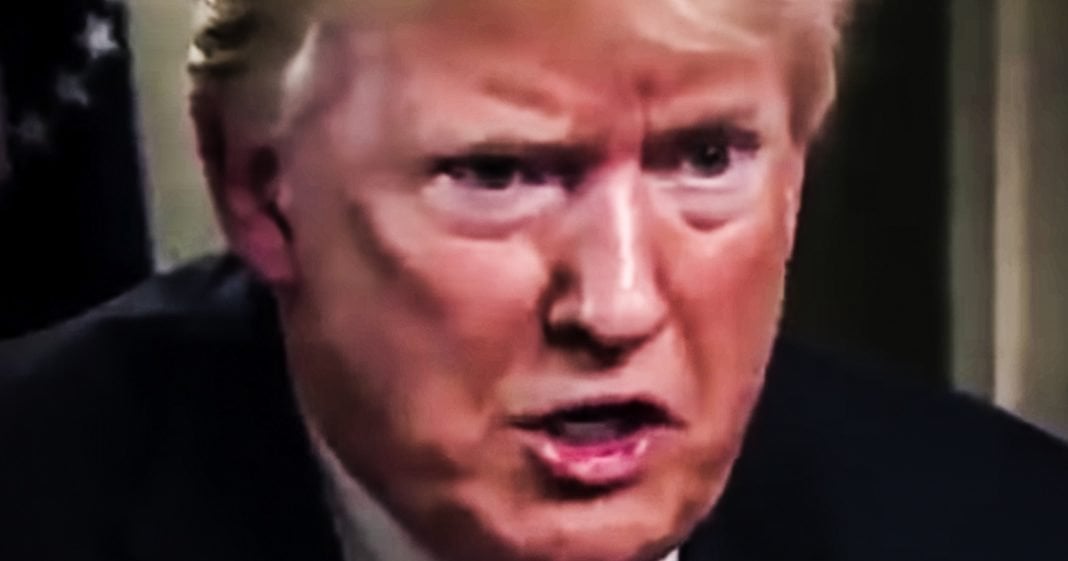 *This video was recorded prior to Trump’s lawyers releasing competing footage of the interaction mentioned in the court filings.*

Donald Trump’s disgusting remarks on the infamous Access Hollywood tape might come back to haunt him as court documents show that one of his accusers from 2016 actually has footage of him doing exactly what he described in the video. This bombshell footage, if released to the public, could be the beginning of the end of Trump’s presidency, especially considering the fact that the lawsuit against him would be easily won by the plaintiff. Ring of Fire’s Farron Cousins explains what’s happening.

According to court documents, there is actually a video tape that shows Donald Trump forcibly kissing a campaign staffer in 2016 after an event in Florida. The case is Alvin Johnson v. Donald J. Trump. And this specific lawsuit is not only related to the fact that the president forced himself upon this woman who did not want this to happen obviously, but also this woman happens to be African American and she’s suing because of a wage discrimination. She claims that she was paid a lot less money than her white counterparts. She was paid less money than her male counterparts, even those that were actually underneath her. So you have wage discrimination, you have gender discrimination, and obviously one of the most important ones, you have sexual assault taking place. That is what happens when you, uh, make these advances and forcibly touch in any manner. Anyone who does not want this, and you do it in a sexual way as Donald Trump does, that is sexual assault, and that is exactly what happened here.

Now, Donald Trump, as we all know, has been credibly accused of sexual assault by at least 19 different women. There are still multiple different lawsuits taking place about that, but as far as we know, none of those actually have video evidence. But this one does. I’m going to read this straight out of the court documents. Says, there’s about eight hours of video.

“at 07:39:44 (i.e., over seven hours into the compilation) is a brief video, taken on a cell phone, showing Mr. Trump kissing Ms. Johnson inside a Campaign RV on August 24, 2016—just as Ms. Johnson alleged. While Ms. Johnson remembered some of the minor details incorrectly (for example, Mr. Trump grabbed her by both shoulders before kissing her, and only took her hand after the kiss) it is now indisputable (sic) that Mr. Trump in fact kissed Ms. Johnson.”

That’s court documents. Ladies and gentlemen, this is the official record for this particular lawsuit. And again, there is video tape evidence of this. This is a big deal and perhaps this story breaking this morning is one of the reasons Donald Trump is on Twitter. Freaking the hell out about every possible thing under the sun right now. But this is a big deal. Is this going to land Donald Trump in prison for sexual assault? Absolutely not. Is it going to tank his reelection chances more than likely, especially if the public ever gets to see that video. So I guess the question a lot of people have right now is why did we not know about this sooner? Especially considering the fact that this event actually took place prior to the access Hollywood tape being released were Donald Trump said, quote, you know, I’m automatically attracted to beautiful. I just start kissing them. It’s like a magnet. Just kiss. I don’t even wait. And when you’re a star, they let you do it.

You can do anything. So prior to that tape coming out, this woman lived through that and then after the tape came out, she was still actually working with the Trump campaign. That tape caused her so much trauma, caused her to relive that event that apparently just scarred her it. So she had to leave the campaign. Um, she was forced to, upon taking the job with the campaign, obviously signed a nondisclosure agreement. And that is actually why we have not heard about this until now. Now that these court records are being made public, it’s the state of Florida. We have open records laws. Wow, this is going to be bad for Donald Trump, but here’s the thing. Yes, she signed the NDA, but an NDA can be nullified if there is potential illegal activity taking place. Obviously this behavior that is being described from this video would be potentially criminal behavior.

Therefore the NDA would no longer be valid in this specific instance. That’s why we’re able to find out about it. That’s why she was able to tell the court about it and that’s why we didn’t hear about it until just now. Follow this one folks, this is going to be a big one. This is going to hurt Donald Trump’s already pathetic. Standing with women here in the United States. Probably not going to fluctuate too much in his support from men. They don’t seem to care about that and they probably liked hearing him say that on the access Hollywood tape. Donald Trump’s probably going to deny it. Even if the video ends up coming out, he’s still going to deny it. We have seen him plenty of times deny things that he has said or done on video. So he’s going to say no. I was giving her CPR, obviously. Next question, but nonetheless, this is very real. This is very damning, and it shows us what a scumbag we have right now, living in the White House.