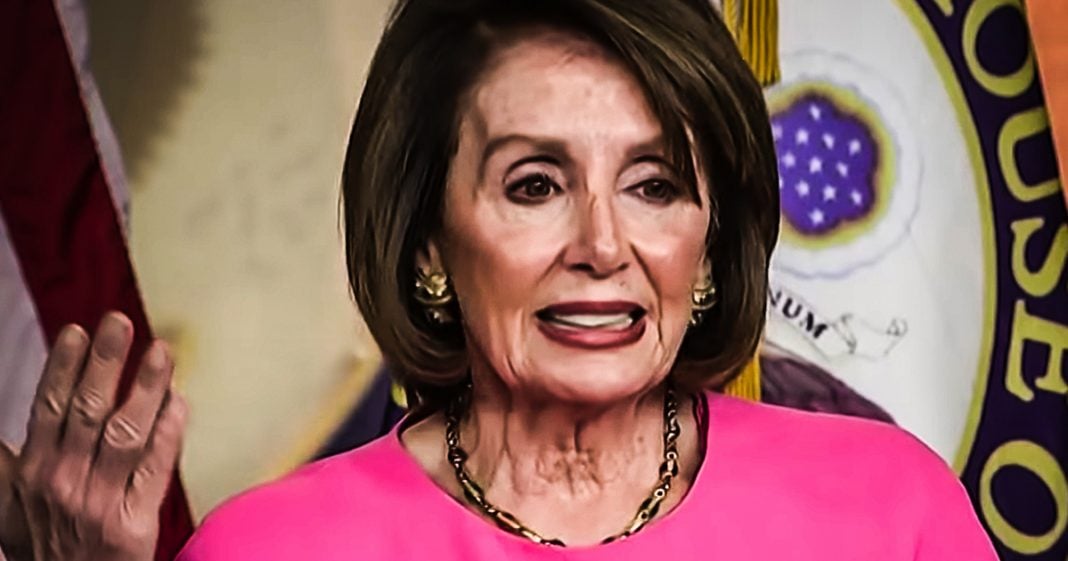 House Speaker Nancy Pelosi issued a stark warning to Democrats in the House yesterday, telling them that they need to keep their grievances with her and the Party behind closed doors and off of social media. Pelosi has spent more time fighting back against Progressives in her own Party than she has against the Republicans, and it isn’t a good look for her. Ring of Fire’s Farron Cousins discusses this.

So yesterday after a couple days of bickering back and forth, Nancy Pelosi decided to pull all of her Democrats into a closed door meeting and warn them, or at least warn the more progressive people that we have in Congress that you better stop talking crap about all the centrists and the blue dogs that we have in our caucus. If you’ve got a problem, you can complain about me. How about that? Nancy Pelosi says, and to be honest, it’s actually not far from the actual quote that she said. Um, here’s a couple of quotes from the meeting that Nancy Pelosi had to basically scold these progressive law makers and we all know who she’s referring to. So again, you got a complaint, you come and talk to me about it, but do not tweet about our members and expect us to think that that is just, okay. Okay, well before I read some more quick tweets, let me, let me go ahead and say something here, Nancy. The other day. And then about a month or two before that, and then a couple months again before that, you in an interview with the New York Times derided these new freshmen, progressive women of all sorts of different ethnic backgrounds. By the way, you’re not picking on the white women, and I hate to bring that issue into this, but it’s starting to look a little weird for you, Nancy, but you’re saying they don’t have a presence. They don’t have followers other than on Twitter. They don’t know what they’re talking about their Green, whatever.

You’re telling the media this and then you’re going out there right now, yesterday telling these women and the other progressive’s in there. Don’t you dare tweet mean things about me. Don’t you say bad things about our caucus? You’re, you’re doing the same thing. You’re a horrible leader. You’re an absolutely horrible God, awful, pathetic and weak leader. Nancy and I will never apologize for making that statement right there because that’s the God’s honest truth. Uh, Pelosi gave an emphatic defense of the moderates and the caucus according to multiple serf, uh, sources telling the room that they’re critical to holding the house. Majority Pelosi told Democrats not to make the blue dog coalition their targets, but criticize her publicly if they need to go after someone, which she actually just said, you know, don’t, don’t tweet about but don’t tweet about it, but then tweet about me if you need to tweet about somebody.

No, here’s the thing, there are very real problems facing the United States today facing the majority of our citizens, none of whom are which, uh, in the one in the 1%. Uh, but here’s the thing, these people out there that you’re chastising, your AOCs, your Ayanna Pressleys, your Rashida Tlaibs, Your Ilhan Omars. These are people that are out there actually talking about the real issues in, to go after Trump when they, when they feel the need, but they’re actually working on real issues. They’re pushing things that would benefit a majority of people in this country who have been neglected by our politicians for too long. And that pisses you off because people are talking about them and people seem to like them. Except of course the blue dogs and every single person on the right, these people have been vilified. They are getting death threats. And you’re sitting there yelling at them. Nancy, think about that folks. I mean, Tucker Carlson use these people the other day, representative Omar specifically to say that this woman is why we shouldn’t have people coming into our country. Look at what she’s done. She is a red flag and Nancy Pelosi feels the need to pull these people into a closed door session and say, you guys are screwing up, grow up Nancy, or better yet retire because you suck. You do. And that’s really the last thing I have to say is that Nancy Pelosi as a leader, as a friend, as a caucus member, absolutely is just God awful.