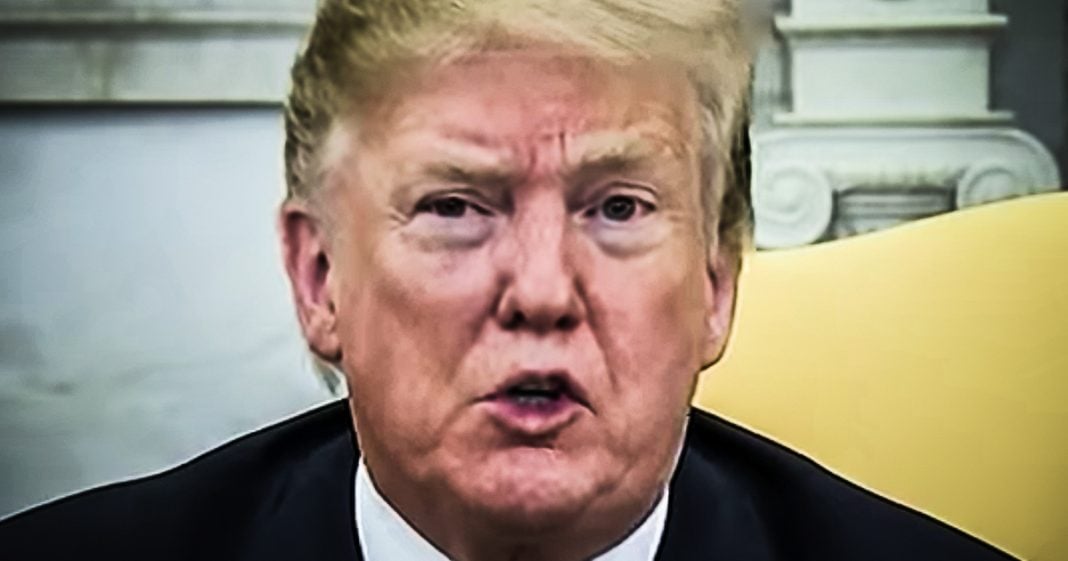 Donald Trump did not have a very good Tuesday, with his administration losing two MAJOR legal battles in a single day. The first occurred when a judge said that Trump cannot block his critics on Twitter, echoing a similar ruling from the lower courts. But the second was much more consequential, with the Court saying that the DOJ cannot swap out their legal team on the census citizenship question lawsuit. Ring of Fire’s Farron Cousins discusses these rulings.

Tuesday was a very bad day for Donald Trump for multiple different reasons, but one of the biggest reasons this man had an absolutely horrible, no good, very bad Tuesday, is because he suffered two major legal defeats within hours of each other. The first one was kind of petty, right? The first one was the appeal from a ruling a while back saying, the Donald Trump can’t block people on Twitter because he is the president of the United States. His tweets are considered official presidential proclamations. Therefore, every American citizen, regardless of whether they like you or not, has the right to read them and the appellate court yesterday said, yeah, that’s true. That’s the case and we’re going to affirm the lower court’s decision. You can’t block people on Twitter. Mr. President, go start unblocking right now. I know Chrissy Tiegen tweeted out that she was super excited about getting unblocked just so that she can block Trump immediately after.

But there’s still tons of Trump critics out there who have been quite a thorn in his side that the president has left on block. But now a second court says you have to unblock them. You know, you do not, your tweets are not protected right here. Uh, you’re not a private citizen. Everybody has the right to see these. This, it really isn’t a first amendment issue on your behalf. It’s a first amendment issue on behalf of the rest of the American public. So again, yeah, that one really kind of inconsequential and less. Of course, you look at what the ruling really says, and this could mean that no elected official gets to block anybody, which that might actually be kind of good again, so this could have broader ramifications. But again, the issue in and of itself is a little bit petty. The second, second ruling against the Trump administration was a big one.

And this one came from a federal judge in New York who told the Trump administration that, guess what? You don’t get to switch out your lawyers who are trying to fight these census citizenship question in court. Now, obviously we know that the Supreme Court, uh, about a week or so ago said, hey, administration, your lawyers can’t come with, come up with any reasonable reason why you need this citizenship question. Their arguments are awful. If you can give us a good reason, we’ll let you keep it. But until then, you got to kill it. So the Trump administration says a wall, we’re going to switch out our lawyers. Well, stretching out lawyers isn’t that easy, right? It’s not like a towards the climax of legally blonde where she just comes in and says, I’m hiring Elle woods. No. Um, you kind of have to file that motion with the courts. And they did. And here’s what the judge specifically said.

“Defendants provide no reasons, let alone ‘satisfactory reasons,’ for the substitution of counsel…”

“…As this Court observed many months ago, this case has been litigated on the premise — based ‘in no small part’ on Defendants’ own ‘insist(ence)’ — that the speedy resolution of Plaintiffs’ claims is a matter of great private and public importance.”

So the administration says, we’ve got to change out our lawyers. Yeah, the first guys, they were pretty bad, so we need new ones to come in who can actually make a decent legal argument and let us keep this horrible census question that has been proven to be based on hurting the Democratic Party. The guy who created it admitted that in his own emails that his daughter turned over to the press, but the judge says, well, you don’t have a good reason for getting rid of your current counsel. You just give me one reason, just, just something, anything that she got and the administration just sitting there.

Would everybody stop asking us for one good reason for anything because we don’t have one. I think about it. Literally. That’s what happened with the Supreme Court case. That’s what’s happened a court yesterday, and every time the judges are like for the love of God, just one reason. Say One thing that’s not completely stupid. Say One thing that’s based on facts. Say One thing that’s actually legal and we’re going to give you everything you want, and this administration and the lawyers are so inept that they couldn’t even give them the one single reason. That is a whole new level of pathetic that I didn’t even think this administration would be able to hit.