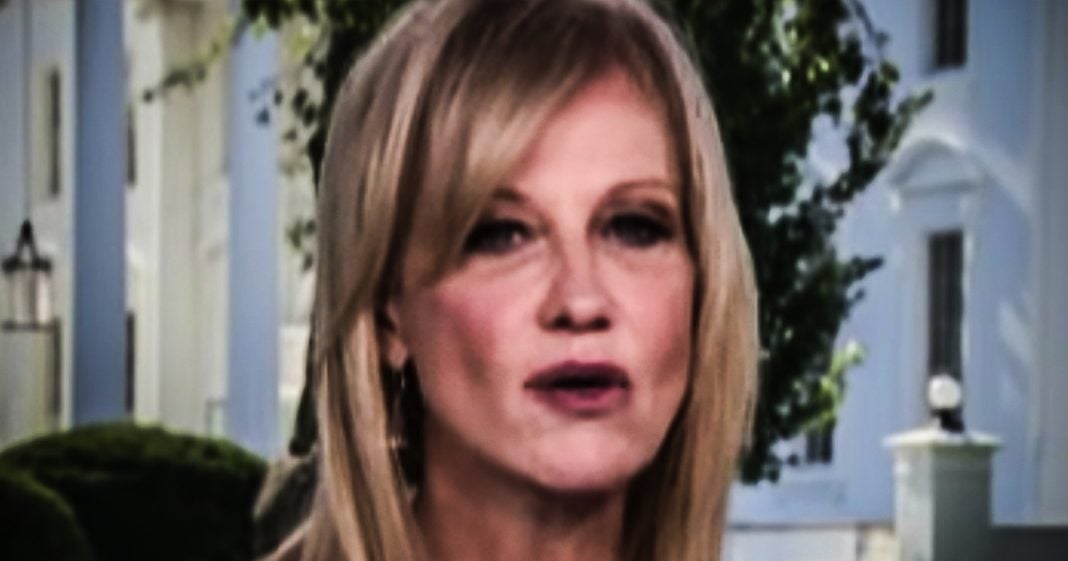 Kellyanne Conway tried to shame progressive lawmakers on Twitter, by posting a video of Nancy Pelosi going after Reps. Ocasio-Cortez, Pressley, Tlaib, and Omar. Representative Ayanna Pressley fired back at Conway, telling her to keep her name out of her mouth and once again calling out the administration’s family separation policies. This is the kind of leadership that we need in DC, as Ring of Fire’s Farron Cousins explains.

Yesterday, White House counselor, Kellyanne Conway decided to, uh, share the New York Times article by Maureen Dowd, where Nancy Pelosi appeared to go after some of the more progressive women serving in Congress. And this is what Kellyanne Conway added to the tweet of that article. She said,

So Kellyanne Conway is out there saying, Ooh, cat fight. Look at this folks. These women can’t control themselves. To which Ayana Presley followed up with this tweet to Kellyanne Conway. She said,

“Oh hi Distraction Becky, Remember that time your boss tore babies from their mothers’ arms and threw them in cages? Yeah take a seat and keep my name out of your lying mouth.”

That right there is the kind of leadership that has been missing in Washington d C for over a decade. And some people may not be happy with Presley’s response there. I 100% am because I am tired of seeing these politicians go out there with these mealy mouth like, oh well we’re not happy with their policies here, and I don’t think they’re being forthright and honest about things. No Presley comes out and says, straight up, don’t talk about me. You’re an absolute liar and let’s not forget the inhumane practices of your boss. That’s what matters.

These women, the women that Pelosi has been trying to demean in interviews are fighters and for far too long, we have not had enough fighters in Washington DC Presley’s tweet here in response to Kellyanne Conway’s excitement over an alleged cat fight was absolutely appropriate and perfect for this particular situation and I want to see more of this. I want to see more fighting back. I want to see more Democrats calling out members of this administration and the Republican Party for what they are. Liars and cheats and just in general inhumane monsters because that is what we are dealing with on the other side in Washington DC. Now, I’m not using that broad brush a brush, the paint, everybody who labels themselves a republican throughout this country, but I am going to use that brush to label the ones in d c in positions of power who enacted these policies and defend them on a daily basis. They are monsters and there is no other possible way to classify them. They are liars. We know that because we know what facts are. We know what fact checkers are, and we can read the fact checkers who tell us that this administration lies repeatedly. So Kudos to Ayana Presley for standing up to Kellyanne Conway, putting her in her place, and absolutely humiliating her on Twitter.