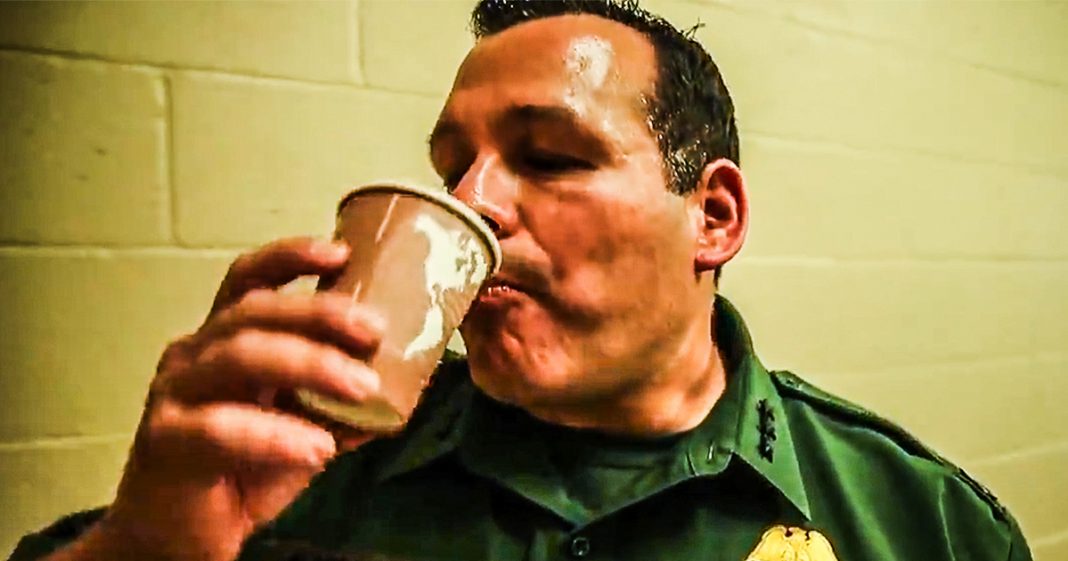 Last week, a US Customs and Border Patrol official posted a video “tour” of the facility that he helps run to dispel rumors about how bad they are. Unfortunately for the officer, his attempts to debunk the liberals included him showing how safe the “toilet water” really is, and a tour around a clearly staged detention facility that obviously didn’t have enough supplies for the migrants at their facility. Ring of Fire’s Farron Cousins discusses this.

Farron Cousins:             Last week on July 3rd US Customs and border patrol release. They video showing us how awesome things are at those migrant detention facilities. The video featured a Tucson sector chief Roy Villareal and he showed us just hey, things are pretty awesome here and in an attempt to own a AOC and all of the other law makers who visited the detention facilities recently, the man actually drank from the toilet. Here’s the clip

CBP Officer:                  This is a supply room that is typical and every one of the stations in Tucson sector will have supplies of our diapers. Baby wipes, clothing for children, mark by gender, age holding for men and women. We’ve got supplies. These are feminine hygiene products that are readily available for any of the detainees. Now come with me as we go on to one of our detention cells. It’s here in front of me as a supply card that is available to families and unaccompanied children includes baby formula crackers, raisins, tuna fish, mylar blankets. Here’s one of the other aspects. There’s a lot of this information that when a lot of people brush their teeth, this is a toothbrush that is preloaded with toothpaste and it’s provided to everyone and readily available should they be one more than one. Now let’s look at the biggest misinformation. I’m going to settle it. Aliens are not forced to drink any of their options, which fresh water was provided on a regular basis in watercolors. There was also water. Then let’s combine it in. This is what this was a combination of toilet, the safe and the seat provides fresh water… There’s nothing wrong with this water. We’re, not forcing aliens to drink out of the toilet.

So, so they were correct. AOC Walking, Castro, Presley, all those other folks, they, they were right about drinking from the damn toilet. But here comes this big buff border patrol agent says, look at this. I’m going to get some water out the toilet to own you libs. Hey, I like that now. Now here’s the other thing about this video. This was 100% staged, right? We can all agree on that. We’re not idiots. First they got all those people’s faces blurred in the background because those are the migrants. He walks through this door. Obviously this is not an actual detention area where he is showing us around and the first thing we see, oh my God, this nice little beautiful, pristine all laid out perfectly. We’ll snack table. Look at this. We got some tuna fish, we got some crackers. Well that’s great if you’re having a backyard barbecue for 15 people, but the paltry little supplies on that table you’re showing us.

That was obviously set up shortly before the video was filmed and only for the purposes of video. That’s not enough to even feed all the migrants that we saw the faces blurred out of, let alone the other hundreds in your facility. That tiny ass supply room. Oh, you’ve got 20 tee shirts there for the men. 18 tampons for the women. Oh yeah, that’s totally enough. That supply room was smaller than the room I am sitting in right now and it’s supposed to provide these provisions for hundreds of people pre-moistened toothbrushes for hundreds of people. You had like six on the table. You idiot. This was a staged video and it proves nothing. In fact, it actually helps prove how horrible things are because they wouldn’t have to stage it. They wouldn’t have to pop up these little Potemkin village situations if things were that great, oh look, we got a cooler in the cell too so they can get some water.

If the toilet water is not a good enough for them. That’s bull. That is bull crap. I guarantee you the second that camera stopped rolling, that cooler left that little holding cell and let’s also not forget that this was in Tucson. Whereas most of the horrible facilities, the worst facilities are actually in Texas, so they couldn’t go to Texas to film this little stunt. They had to go to a different one that maybe was a little bit cleaner. Maybe they do have working toilet water fountains, but this is not the reality that most of those migrants are down there facing. We know that we have seen the photographs from the inspector general’s report. Those aren’t fake. We know what is going on, but the federal government doing what they do best under Donald Trump’s sitting there lying to our faces, even though we have plenty of photographic and credible witness proof that the exact opposite is what’s actually taking place.