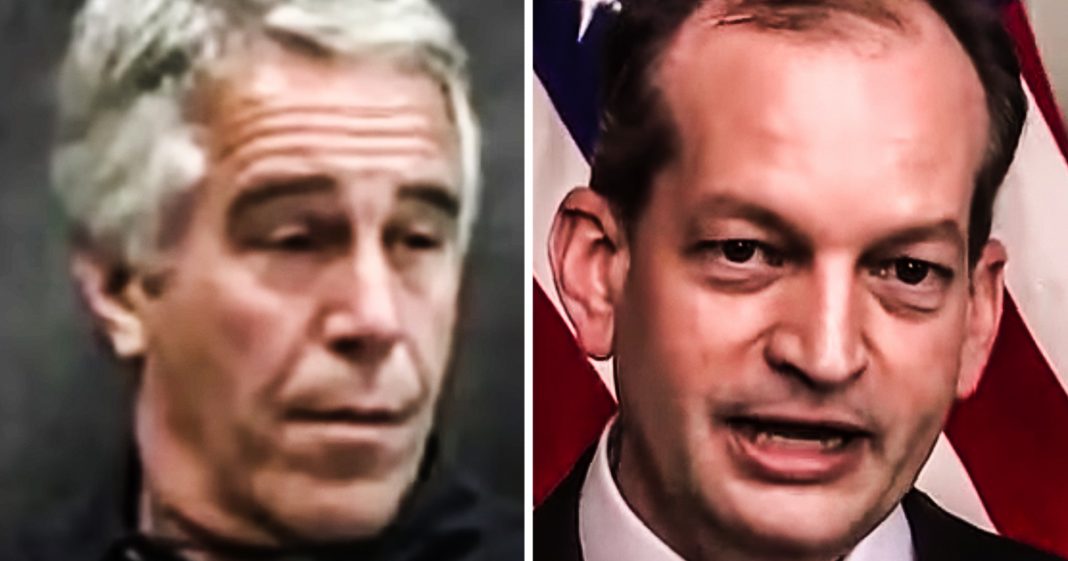 The cries for Donald Trump’s labor secretary Alex Acosta to resign are growing even louder after the latest arrest and charges for Jeffrey Epstein. Acosta worked out the secret sweetheart deal with Epstein and his lawyers in Florida years ago, a move that a court recently declared “illegal.” Acosta is in a bad place, and there will likely be a lot more prominent people joining him very soon, as Ring of Fire’s Farron Cousins explains.

In the last 48 hours calls for Labor Secretary Alex Acosta to resign, have basically reached a fevered pitch. And the reason for that is obviously because Jeffrey Epstein, the billionaire convicted a pedophile, was arrested again this past weekend in New York. He was arrested on charges of having sex with an underage girl, human trafficking and conspiracy to traffic in humans. Acosta, for those of you who don’t know the story, which I don’t know if that’s any of you at this point, everybody knows what happened, but anyway, it costs us. The guy worked out that sweetheart plea deal. A decade or so ago, 16 years, I think, uh, down in south Florida when Epstein was originally popped for having sex with underage girls, the plea deal included a 13 month prison sentence. No federal charges did not get life in prison. And that 13 month prison sentence at a private wing of the, uh, prison also allowed Epstein to basically leave for up to 10 hours every single day to work, which basically means go do whatever the hell you want.

You’re a billionaire and you’re highly politically connected. So we’re not going to screw with you. And then Acosta here gets rewarded with a spot in Trump’s cabinet as the labor secretary. But even Nancy Pelosi at this point is calling on Alex Acosta to resign. Hell, just a few months ago, a judge re looked at this case and the plea deal and said that a cost to acted illegally in making this lenient plea deal for Epstein who should have been in prison for his entire life. And now that we see that Epstein is clearly not changed his ways or maybe he has doesn’t appear that way. Of course, right now we can’t say he hasn’t because he hasn’t been reconvicted yet, but Epstein still appears to be a bit of a scumbag and he’s going down and a cost is going to go down with him and many other highly powerful people in this country are likely also going down, up to and including people like Bill Clinton and possibly even Donald Trump.

Now, depending on which side of the aisle you are on right now, there’s lots of people on the right talking about how Bill Clinton was neck deep with the Epstein. There’s lots of people on the left and left the media who are saying, oh, Trump is neck deep with Epstein, but the truth is both of them were, and believe it or not, there’s more people than you would think who are saying, you know what? Take them all down and that is the right mentality to have right now. Take them all down because if you think that they’re your ally but they’re also possibly having sex with underage girls or condoning someone else having sex with underage girls, then guess what? They’re not your ally. Let them go down because that’s what needs to happen here. This kind of behavior is inexcusable. The plea deal that Acosta worked out is inexcusable and Acosta is eventually going to answer for that and Congress needs to get on it.

You can call him in to testify, you can subpoena him, you can get him in there. You can put the pressure on him so badly that he is forced to resign, but you’re not going to do that by simply going out and telling reporters, I think he should resign. You have tools at your disposal and you have to use them get inside of his head. Because if you think that simply going out and doing an interview or telling a reporter in passing that a cost is a bad guy’s going to do anything, then you are sorely mistaken. Let a cost that go down because if you don’t take them down, Epstein might and Epstein might also take down some other folks. You know what we’re learning so far about this story is absolutely abhorrent and we know that Epstein, yes, flew Bill Clinton on his plane 26 different times. Donald Trump has talked fondly about how much Epstein loves to party and how much he loves his girls on the younger side.

I think it’s safe to say at this point that it’s likely both of those men are involved in this and I’m sure there are others. Dershowitz, Alan Dershowitz has been implicated in this by some of the women. This is big, this is important, and it threatened some of the most powerfully elite people in Washington, D C and again, the only thing I have to say about that is let them all go down. If you were involved, I don’t care if there’s a D next to your name or an R, if you’re involved with Epstein in any way in these disgusting behaviors, then you deserve whatever is coming your way.