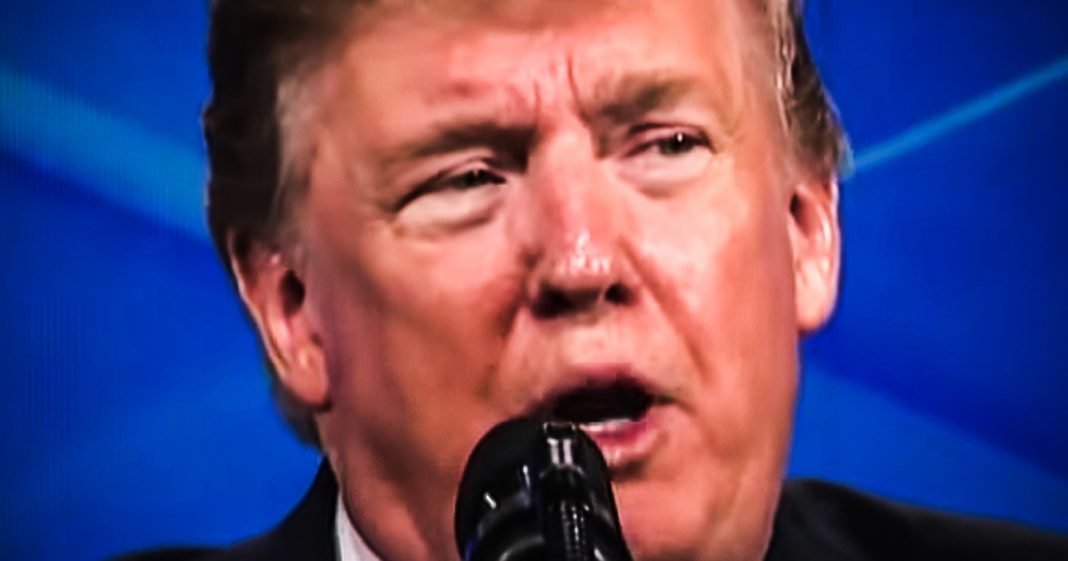 Donald Trump thinks he is the king of Twitter, but he has repeatedly shown us that he can’t distinguish reality from fiction. This week, the President shared a fake meme with a fake quote from Ronald Reagan that heaped tons of praise upon Trump, only for it later to be revealed that it was a parody account tweeting out the fake info to dupe the President. He fell for it, and the whole country is laughing at him once again. Ring of Fire’s Farron Cousins discusses this.

Donald Trump likes to behave as if he is the king of Twitter. He gets on Twitter, he mocks other people. Hell, just this morning he was telling us how stupid is the word he used the a UK ambassador to the United States is, but if you want to talk about stupid on Twitter, you really have to talk about Trump himself. Just yesterday, Donald Trump was fooled by a phony Twitter account posting a very real picture of Donald Trump and Ronald Reagan over, which was super imposed. A very fake quote that Ronald Reagan never said. Donald Trump retweeted this picture from the fake account and said, cute. That’s it. That was the only commentary on it. Cute. Here’s what the fake quotes said for the life of me and I’ll never know how to explain it. When I met that young man, I felt like I was the one shaking hands with a president.

That is allegedly what Ronald Reagan said about Donald Trump in 1987 when Donald Trump was 41, the two of them are, are seen in the pictures, shaking hands in the blue room of the White House. And Trump said, cute. The thing is, this quote has actually been going around for quite some time. Snopes had to debunk it back in 2016. Um, Politifact had to debunk it just a few months ago, rated it a pants on fire. So this quote has been going around for quite some time. And the phony Twitter account, which was a play on the at Reagan Battalion, a Twitter account, it was Reagan Battalion. No l just capitalize the I to kind of fool people with the name. Uh, Trump believe it was the real group retweeted it cute. And the whole world laughs at them as they always do. But here’s the thing, Donald Trump and Ronald Reagan may have been in a photo together.

Trump likes to say that, you know, Reagan, you know, I guess kind of admired him, but the truth is actually the exact opposite. And we know that because of the presidential records act and president’s records get saved, they have to get safe. That’s the law. And so savvy reporters have actually gone through records from the Reagan administration searching for any mention of the word Trump. And I’m just going to read this from the Washington Post. A review of every Trump mentioned in the Reagan file shows that the White House aides spent much of the 1980s trying to gently reject the mogul self-aggrandizement overtures without bruising that large ego of his back. In 1983 Trump snagged a picture with the president during a photo line at a White House event. The president not paying any attention signed it, Reagan, Reagan. Five years later, Trump included the image in his book, The Art of the Deal and aid in the social secretary, his office notice the mistake and send them an apologetic note and a corrected picture signed with an auto pen.

So Ronald Reagan cared so little about Donald Trump that when he was standing in the line that all the other people were standing in to get an autograph. He was so aloof that he signed his name, Reagan Reagan. That’s how little attention he was paying to this man. And then the other times that they had to deal with him, they wanted to be like, hey, that’s cool man. You know, really great idea. Thanks some, why don’t you just go ahead and head on out. We’re going to talk about this later. Because they didn’t want to bruise his ego as they said, but they also couldn’t stand him. And this was back in the eighties this was back when most people didn’t give a damn who Donald Trump was. Most people in this country hadn’t even heard of him, and this White House tried to brush him off and now he’s trying to capitalize on the Republican parties. You know, deification of Ronald Reagan and saying, oh, Reagan loved me. He thought I was great. Now Reagan couldn’t stand you. Reagan’s aides couldn’t stand you. Nobody in the White House in the 80s could stand you and they didn’t even like being around you and they couldn’t be bothered to even spell their name correctly when you came asking for an autograph. That’s not admiration. That’s complete and utter indifference to you and your self-aggrandizing ways.