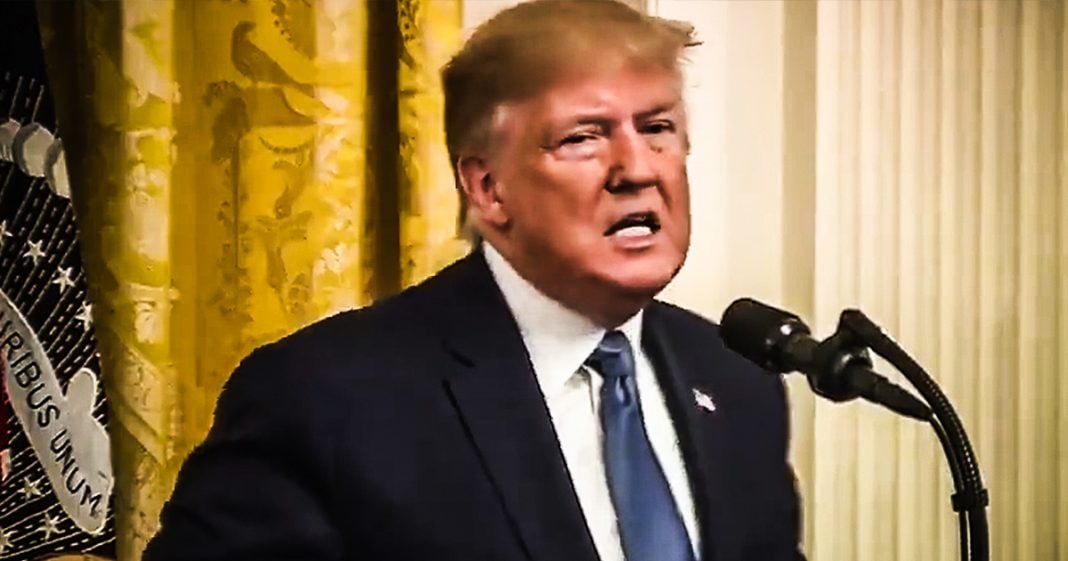 On Monday, Donald Trump gave a speech about the environment, just moments after Washington, D.C. experienced one of the heaviest rainfalls on record. But rather than talk about leading the country forward, Trump derided progress by making absurd and completely false claims that plans like the Green New Deal would somehow harm minorities and poor people. Ring of Fire’s Farron Cousins explains why Trump’s claims have no basis in reality.

Farron Cousins:             Yesterday, Donald Trump decided to give a speech about America’s environmental leadership. Obviously it’s a very important topic we have seen just in the last few days, anchorage, Alaska hit the 90 degree mark, which is the highest temperature ever recorded in Anchorage, Alaska. We had glaciers off the coast hit temperatures of 84 degrees. Yes, climate change is real. So yesterday Donald Trump gives this speech and it’s also worth noting that a, just a few moments before he gave that speech, Washington DC had one of the heaviest rainfalls that they have ever had in recorded history. Basically what they’re calling a month’s worth of rain fell in less than an hour. Even parts of the White House ended up flooding from this torrential downpour. So yes, extreme weather that comes from climate changes all over this country, right? This second, Donald Trump didn’t want to talk about that. Donald Trump doesn’t want to address any of the possible solutions or paths forward. And we know that because he told us that. But the reason it’s the reasoning that he’s attempting to use or con the American people into believing is what is so absolutely disgusting. And here he is explaining for himself why he doesn’t want to move forward with any kind of environmental action. Take a look,

Farron Cousins:             So that’s right folks, if we protect the environment, if we make the air a little cleaner in the water, a little cleaner, if we move towards a green economy, minorities and poor people are going to suffer because of that. So I guess in Donald Trump’s mind, we need to keep burning fossil fuels, keep emitting more carbon into the atmosphere, keep all that lead in the drinking water along with all the PFASs and PFOAs, all those other toxic chemicals, the fracking chemicals. Let’s keep that in the water because by God, if we take that out, black people are going to be so much worse off here in the United States. Right? What’s interesting about Donald Trump’s comments here, and I’m annoyed that there aren’t more people talking about this, is the fact that environmental racism is very real here in the United States. There have been plenty of studies that prove that people of color here in the United States are adversely effected by pollution, by climate change, than any other demographic.

Yes, white people are still affected. Every time I say that, I get people saying white people are affected too. Nobody said they weren’t. It’s just that look at the studies and minorities are more severely impacted by this, and that is what we refer to as environmental racism. But Trump’s up there telling us that, oh no, if we clean things up, if we make things better, black people are going to be so much worse off. We don’t want that folks. We’ve got to protect the minorities in this country. We have to protect the poor. And that’s what I’m doing by sending them down into the coal mines where they can develop black lung instead of, you know, having them work in renewable energy. You know, have them out there building solar panels or building windmill parts or building battery capacitors, you know, whatever it is that we need to create to build this new green economy infrastructure.

We have the technology, it’s there, it exists. We could do it. We’re just not. And that’s the problem. But as long as we have people like Donald Trump in office, we’re not going to move forward on this problem. A problem. He wants to keep taking us backwards because as he said in the little clip, he doesn’t want to stand in the way of growth, you know, pro-growth policies, which basically just means letting corporations do whatever the hell corporations want to do. I don’t want to mess with their profits. And if they can profit a little more by dumping their toxic waste into our waterways, then I’m a let them do it. Cause I don’t want them to have to spend any more money. And according to Donald Trump, poor people and minorities are going to be better off for it.