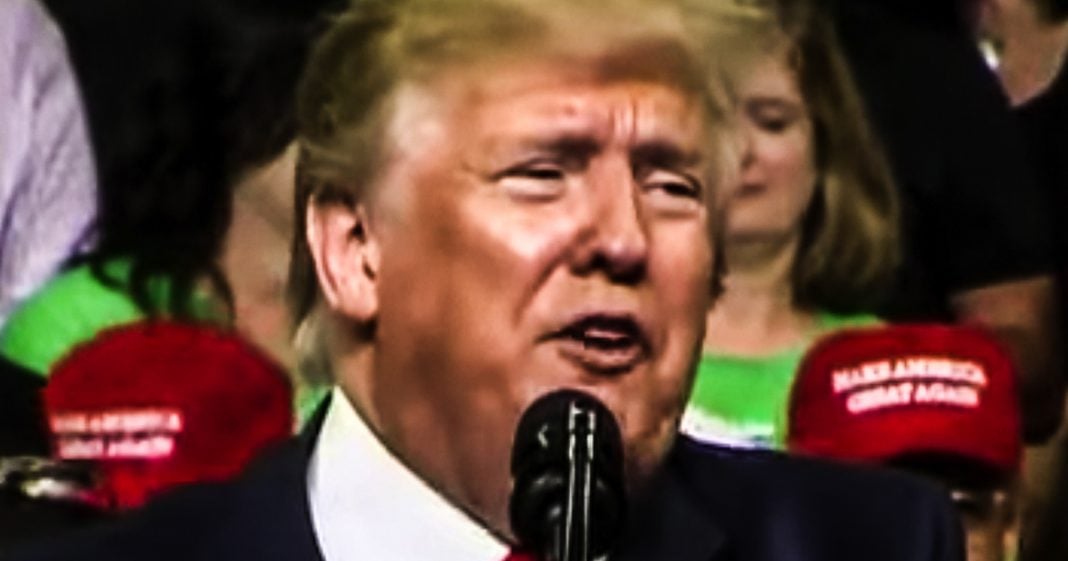 A few months ago, Donald Trump shocked us all and did something really good on the issue of healthcare. His administration issued an order that said drug companies had to reveal their prices in their advertisements. Unfortunately, an Obama-appointed judge this week decided that this wasn’t a good thing, and he ruled against the administration and put the brakes on this plan. Ring of Fire’s Farron Cousins explains what happened.

Over the last few years. We have spent a lot of time talking about how horrible Donald Trump has been and that’s the truth. But occasionally I think there’s actually been two issues that Donald Trump actually did something decent that would have helped the American public. And recently one of those things that he and his administration did that was good was that the department of Health and human services came out, drafted a rule that said pharmaceutical companies have to put the prices of their drugs in their advertisements. Now I know that does not necessarily lower the prices, but when you’re sitting there watching your favorite cable news program and you see an ad come on for a drug and suddenly at the end of it they say, this drug called six eight a $618 for a 30 months’ supply. Holy Crap. What does that do? That puts drug pricing front and center in the minds of Americans. They can’t ignore it. Maybe they’ve read stories about, Oh yeah, I know drugs are probably very expensive, but I’m not taking prescription. So what does it matter when you see it flashing in front of your face? Every time a commercial break comes on that matters.

That was a good thing and that new rule was actually supposed to go into effect this morning today, Tuesday, July 9th today was the day every pharmaceutical ad in this country would have a price on it and nobody would be able to ignore that issue anymore. That was a good move by the Trump administration. What is not going into effect? Because yesterday and Obama appointed judge in Washington DC, Judge Amit Mehta, who we have discussed multiple times. He’s been a good judge so far, but yesterday he decided, you know what? Trump administration, you don’t have the authority to do this. I am striking this down and drug companies, you don’t have to put your prices in your ads. And Obama appointed judge struck down one of the only good things that Donald Trump has done since taking office. I mean, if that’s not irony than I don’t know what is Democrats. That’s a bad thing. The judge did bad and Trump did good. That’s a rare scenario in America today.

The judge is what he wrote in the ruling. He said that policy very well could be an effective tool in halting the rising cost of prescription drugs, but no matter how vexing the problem of spiraling drug, cross drug costs may be, HHS cannot do more than what Congress has authorized. The responsibility rests with Congress to act in the first instance. Now I disagree with judge Meadow’s legal ruling. Here he is telling us and he tells us further in the ruling that HHS simply does not have the authority to force these drug companies to put their prices in their ads because congress is the one who passed the drug advertising bill that wasn’t included in that. Congress has already basically ruled on it, I guess, and judge says they didn’t put the prices in there, so you can’t put the prices in there. Congress would have to come back and do that, but that’s not necessarily the case.

This could have easily been argued the other way by the judge. He could have said, okay, yes, legislation gets passed all the time. And then these individual departments come out and they make their rules that basically add on top of it. I mean, think about what the EPA does and what the FDA does. They’re allowed to issue rules for the industries that they regulate without having to have congress make the first move as judge Mehta tells us there. So why HHS in this one specific instance? Why do they have to wait for Congress? And more importantly, why is the American public having to wait for Congress? Why isn’t Congress doing this? This was a good idea. Again, it is not going to necessarily lower the costs, but it’s going to put it in a way that nobody in this country, rich and poor alike can ignore any more. That’s what was so important about this. This is why it was such a good move. And that is why the drug companies, Merck, Eli Lilly and Amgen filed this lawsuit against HHS, who by the way, HHS, sex, uh, a secretary, Alex Azar actually used to be an executive at Eli Lilly and he still put this rule in place. The drug companies didn’t want it because they knew it would be a disaster for them. And Judge Mehta said, you know what, I bet I can twist my legal reasoning just enough to go ahead and side with big farm on this one and undo the only good thing that Trump would ever have to his name.