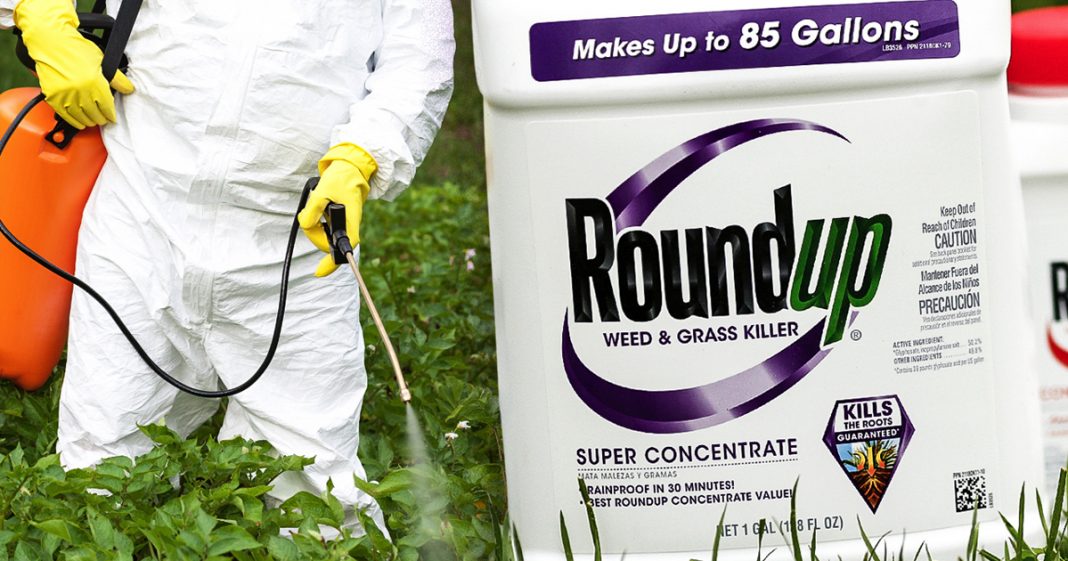 Via RT America: Countries around the world are phasing out the use of glyphosate-based weed killer RoundUp following an inundation of lawsuits against Monsanto and parent company Bayer by those diagnosed with cancer after using RoundUp. Thirty countries have banned or restricted glyphosate or stated their intentions to do the same. RT America’s Mollye Barrows joins News.Views.Hughes with the details.

Scottie Hughes:                  A man who claimed Roundup caused his cancer will not be getting the full $80 million in damages the jury awarded to him. Now this week a federal judge said he would reduce the amount to $50 million or less. Now the move comes as more world leaders phase out the use of Bayer’s glyphosate based weed killer. Mollye Barrows, legal journalist with America’s Lawyer joins us now with more. First Mollye, why is the judge reducing the amount the jury awarded to this man? It’s still a lot of money, but $30 million less.

So Monsanto originally made Roundup and Bayer bought the Monsanto Company for $63 billion last year. Bayer is standing by glyphosate, says the active ingredient that of course is the active ingredient in Roundup and he says it’s safe for humans and does not cause cancer according to the company. However, they are facing a lot of lawsuits, Scottie, from around the country, 13,000 plaintiffs and counting. Bayer says it set up a committee though to help resolve this litigation and they’ve hired an external lawyer to advise at supervisory board as well. But yeah, they’ve got a hot potato on their hands, if you will.

Scottie Hughes:                  But that’s the thing Mollye, I’m really glad to hear this is more about just simple math, not necessarily the case itself. There’s still nothing, the case is still solid. This is just the math number which makes us think about the future of these cases and others that might come in. You know Mollye glyphosate based weed killers are common around the world. You know, other countries are starting to respond. How are they responding to these cancer concerns?

Mollye Barrows:                I think a lot of the scientific evidence that’s coming to light is making them rethink their position on these glyphosate based herbicides, including Roundup. So nearly 30 countries have either banned, banned it entirely or they restricted its use or issued statements that they intend to ban or restrict it. So it’s not banned by the European Union as a whole. But there is growing public support for a ban on glyphosates. Austria would in fact become the first country in the EU, in the EU to ban, ban all uses of glyphosate over concerns it causes cancer.

That’s if a bill that some lawmakers have already passed becomes lost. So it’s still got to go through their parliament. But it does look as if it will pass and if it does pass, it’ll take effect right around the beginning of 2020. But in 2015 they’re basing some of their information on this report when the World Health Organization’s International Agency for Research on Cancer said that glyphosate is “probably carcinogenic to humans.” So Austrian lawmakers, they’re basing, that’s what they based their decision on, science. Bayer of course is taking issue with that.

They say they respect the decision, but they feel like they’re basing it on faulty science, if you will. And they’re concerned about the legality of a ban that is not in line with the EU. So we may see some pushback from Bayer about that. Well, in the meantime, German Chancellor Angela Merkel is taking steps to also limit the use of glyphosate based pesticides as well as herbicides. And she told her government that she believes that use of it will eventually die out altogether. So it looks as if glyphosates are losing some support around the world, Scottie.

Scottie Hughes:                  Well, and that’s the thing, all it takes is one and it’s like dominoes, they all fall, because it’d look really irresponsible if one country protects their citizens and the other don’t. What is Bayer’s response, however, to these international concerns and all the lawsuits?

Mollye Barrows:                Well, it’s interesting because, you know, again, they bought Monsanto, which made Roundup initially, and it’s not just a huge part of the company’s profits, but it is a, you know, a part of their umbrella and certainly makes them some money. But they’re maintaining that glyphosate is safe to use and does not cause cancer, but the company is responding to those market demands. Of course it’s always about money and they say they’re going to invest more than $5.5 billion in researching alternative herbicides and offer other choices to consumers.

So we’ll see where that goes. But you know, like you mentioned, we’ve had a series of big verdicts against Bayer over Roundup which has caused the company stock to plummet to a seven year low last month. Bayer is now asking as well a California judge to reverse one of those big verdicts, the $2 billion one that was awarded to a couple who also said they were diagnosed with non Hodgkin’s lymphoma after using Roundup. The company says that that award was based on “inflammatory, fabricated and irrelevant evidence” and asked the court to throw out the verdict in Hardeman’s case as well.

So Bayer’s next glyphosate trial will start this summer in St Louis. That is the former headquarters of Monsanto and the company will likely be embroiled in a lot of litigation for years to come, Scottie. But they say they’re sticking by glyphosate. They see a bright future for it despite Merkel’s comments, despite the wave of litigation.

But, you know, and in fact the same day that Merkel said that she saw an end to glyphosate in Germany, Bayer’s shares actually jumped when the company shared their plans to resolve the multibillion dollar lawsuit that it faces. So we’ll see where things go. But it certainly looks like it’s, a lot of folks are starting to question if it’s a good idea to use it and we’ll see how long Bayer stands by it.