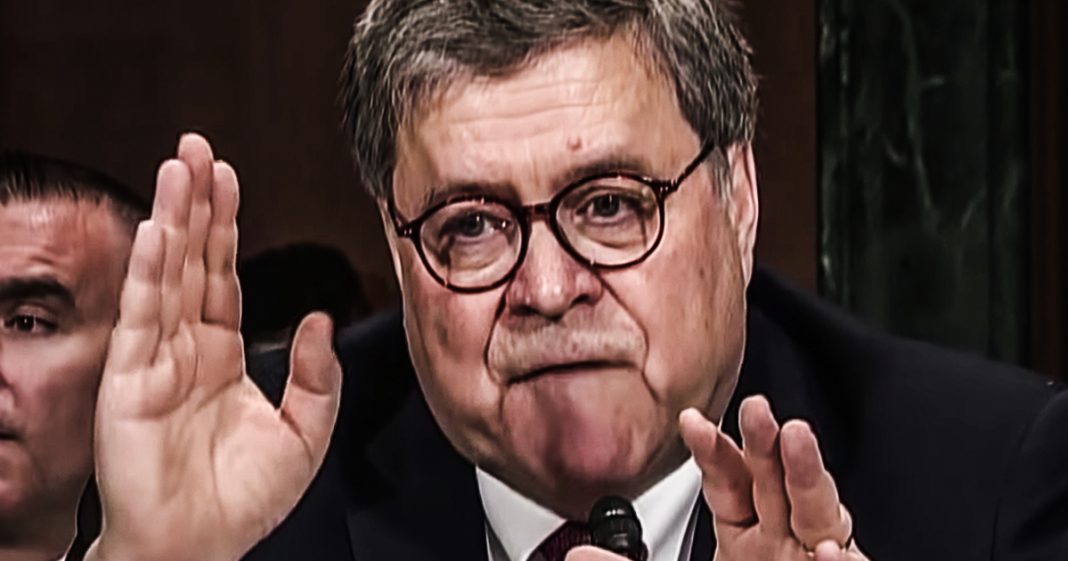 Attorney General William Barr believes that the President and the entire administration are above the law and that they don’t have to listen to the Supreme Court who told them to remove their citizenship question from the upcoming census. Barr says that the question will likely end up on the census, a clear violation of the orders of the highest court in the land. Ring of Fire’s Farron Cousins explains what’s happening.

In an interview with the Associated Press this week. Attorney General William Barr made it very clear that he believes that Donald Trump and the entire Trump administration are 100% above the law and that they do not need to comply with the recent Supreme Court ruling saying they can’t put the citizenship question on their census. William Barr said, no, I think we’re going to move forward with it. I think we’re going to put it on there because I disagree with what the Supreme Court said. Here’s the exact quote. He said, I agree with him, Donald Trump, that the supreme court decision was wrong and there is an opportunity potentially to cure the lack of clarity. That was the problem and we might as well take a shot at doing that. What William Barr is referring to there is the fact that the Supreme Court and their decision on the citizenship question said, hey, uh, the reason that you gave us why you need this citizenship question is total BS.

We don’t buy it. We don’t believe it. Can you give us any other reason on the planet? Why you want this citizenship question on there and I can promise you we will let you do it. You got to give us a viable reason. You know this one doesn’t sell, so give us something else and we’ll, we’ll make it happen. And they couldn’t do it. They couldn’t do it. And we all know because of all of the leaked emails and everything that has now come out that yes, the driver of this citizenship question was to harm Democrats and harm minorities. We know that now the guy who created it admitted that in his own internal documents, there is no question about that. And the Supreme Court knew it, but they tried to give this administration another chance. They tried to say, listen, any region in the world, something maybe say because you think it’s going to make it sunny or outside, we don’t really care, but your claim that it helps you enforce the voting rights act.

Eh, that’s really sketchy. And we can’t say yes based on that. So give us something else. And the Justice Department couldn’t do it. They couldn’t. So William bar is now telling us like, you know what? Screw it. We’re going to put a question on there and then when it gets challenged in court and works its way up, by the time it goes back to the supreme court, we’re totally going to have a viable reason for why we did it. We’re just too dumb to think of it right now, but the bigger picture here is not that William Barr’s just like, eh, come up with a reason later. It’s the fact that William Barr is telling us that Donald Trump, that he himself, Mr Barr, that this entire administration, they’re above the law. The Supreme Court specifically said, you can’t put this question on there. That was our ruling. You might be able to come back later, give us a a better reason and we’ll rule on that and then we go from there. But as of right now, as it stands right now here in the United States, William Barr, Donald Trump and everyone involved in this is forbidden by law to put that citizenship question on that census. It’s forbidden. And here they are telling us we’re going to do it anyway.

Barr should have been impeached weeks ago, weeks ago. William Barr should have been gone. Democrats didn’t do it. They just left him there and now look, he is telling us that he and everyone he works with and works for is above the law. Democrats can drag their feet on impeachment if they want, but every day that passes that they don’t get rid of Trump or they don’t get rid of Barr. They don’t get rid of any of these other scumbags in this administration. Every day they dragged their feet. This country goes a little bit further down the toilet. That’s what’s happening right now. And William Barr seems proud of the fact that he is the one flushing us down further.